An excellent region of Spain for visitors coming from Madrid or Barcelona to see is Andalusia, covering the southern portion of the country.

After about a four-hour bus ride from Madrid is the city of Cordoba. Because this was just a pit stop on our journey, we only saw a small amount of the town but we toured La Mezquita, a beautiful complex of Islamic architecture.

Our tour guide was full of fascinating information, I was sad to learn that because the building was conquered by the Catholic Church long in the past, Muslims today are still banned from praying in the Moorish structure. It was a beautiful tour and provided an interesting juxtaposition of two distinct religions and history all in one building. 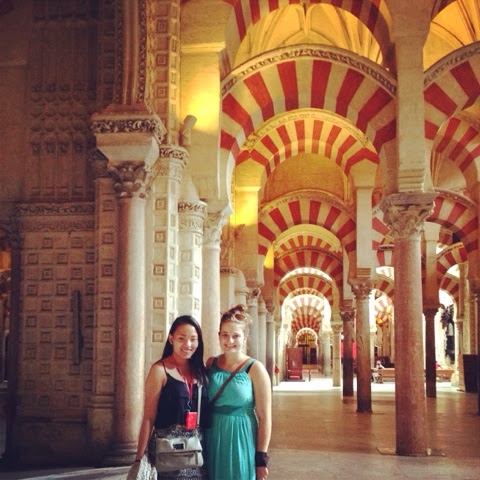 After la Mezquita and a small neighborhood of Córdoba, we had lunch and then it was back on the bus to head down to Granada.

Once in Granada, we checked into a nice hotel on one of the main streets, a very beautiful area close to the main attractions of the city. Hotel Vincci Granada, it was rather fancy and well located, but overall somewhat unnecessary. We hardly spent any time in the hotel when there was so much to see and explore in Granada. Friday night was an early night as we were exhausted from the travel and touring of the day.

The next morning, it was time to visit the Alhambra. Located very close to the rest of the city, it was a short bus ride uphill. The tour was absolutely unbelievable. The most impressive and breathtaking component of the Alhambra was by far the extensive network of gardens and fountains. It is sometimes called a “pearl amongst emeralds” because it is a massive, white structure hidden amongst beautiful greenery. One thing Granada is really well known for is tapas, more so than any city in Spain. We enjoyed tapas at the restaurant at the hotel, nothing like getting free mini burgers, croquettes and potato dishes with the order of a drink. It was all for a really good value, €2,20 euro for a glass of strong rosado.

I can’t exactly explain the overwhelming feelings that I experienced while in Granada, the best way to put it was that it just felt right being there. While aimlessly wandering the streets of the city, I was overcome with feelings of the magic of this city.

Granada has gorgeous architecture and Moorish style that I adore, and has a perfect pace of life, with plenty of young people out late, enjoying life but not partying too hard. I wish I could put the feeling into words more eloquently, but ït just felt “right” is the only way I can think to describe it. During our wanderings, we stopped for a glass of sangria next to the river in Sacramonte, a noted gypsy neighborhood of Granada sitting below the Alhambra. The river flowing nearby was much more of a large stream than a river but was considered a river on the tourist map that I had.

The cool water felt great on hot, sweaty feet, and a giant cave-like storm drain was right near where we climbed down to water level. Natural curiosity led us to climb into the “cave” to end up at an underground waterfall-type source. It was probably just a storm drain, but nevertheless, it was a fun experience, crawling in a dark cave over rocks and flowing water. Granada was such a beautiful experience, I enjoyed every minute in the city. I would highly recommend anyone spending time in Spain to make time to visit Granada, at least for a day if not for a full weekend. If you´ve been to Granada and did things I did not mention on here, what did you see/experience and would you recommend it? Leave a comment below

Like Loading...
By Valerie Streif
alhambraandalucíaarabianarchitectureartcordobaespañagranadahistoryislamic architectureislamic artla mezquitapartySpainspain travel
A Guide to the Top Sights in Toledo, Spain
How to Survive the Running of the Bulls