An amazing day trip you can take from Madrid is to El Escorial and Valle de Los Caídos.

El Escorial is one of the Spanish royal sites, located about a 20-minute drive northwest of Madrid. The full name of the site is Real Monasterio El Escorial, meaning the royal monastery. It is the historical residence for the King of Spain, and in 1984 it was declared a world heritage site by UNESCO, attracting roughly half a million visitors per year. 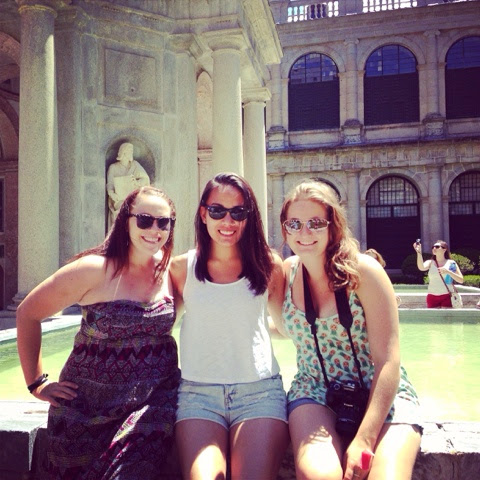 In the Courtyard of Kings Most of the tour of El Escorial was off-limits to photography, but here is a summary of a few of the other parts of the complex.

Pantheon of the Kings

A cold room containing giant marble coffins of the past kings and their queens of Spain. The room was spectacular but somewhat creepy.

Basilica
The Basilica had one of the most impressive domes I have ever seen, it was truly amazing to crane my neck upwards and imagine the feat of constructing such a building. It was cool to walk around and see the religious artifacts as well as admire the architecture of the space. Probably my favorite part of the whole place was a huge hall containing hundreds of books, and the view out the windows was a beautiful landscape.

After touring El Escorial, take a break for lunch at a little restaurant in the nearby towns. It will be the perfect way to break up a day. After, head to Valley of the Fallen, or Valle de Los Caídos. Valle de Los Caidos is a Catholic Basilica in the same municipality as El Escorial. Construction was prompted by Francisco Franco and it is dedicated as a monument of memory to all who died in the Civil War, in a gesture of reconciliation. Franco´s body is buried in the basilica, along with the body of Jose Antonio, an early figure of the Falange movement. It seems a bit strange to have a monument dedicated to a dictator, but it reveals that there are still Spaniards who believe in far-right forms of government and still believe in Francoist government structure. Photography within the basilica was not allowed, but the views of nature surrounding the basilica were far more breathtaking than the complex in my opinion.

Many people took a moment to sit and pray while in the main basilica part, but I took my moment outside, as the surrounding area is full of trees and wilderness, and the smell was of dry faint pine. This is a great day trip to take from Madrid. If you want to dive deeper into Spanish history as well as see some beautiful landscapes in the mountains around the city, head to El Escorial and Valle de Los Caídos during a visit to Spain.

Like Loading...
By Valerie Streif
adventurecastlecatholic churchchurchDestinationsel escorialespañafrancisco francoSpaintourismtouristtoursvalle de los caídos
Budget Travels: The Night Train from Lisbon to Madrid
A Guide to the Top Sights in Toledo, Spain