Stepping off the bus from Hamburg and setting foot in Berlin was like opening up my European History textbook from high school and stepping into a chapter. It was made even more magical by all the Christmas decorations and markets scattered throughout the city. From the beautiful, classical-style buildings on Museum Island to the raw, powerful murals of the East Side Gallery, Berlin is definitely a city that anyone who loves history, especially 20th century history, needs to visit.

I stayed at the Heart of Gold Hostel. It was a great location, walking distance to a subway S-Bahn stop, and also a walking distance to the city center, the Alexanderplatz TV Tower. It had a great atmosphere, a reasonably priced bar, and decent sized rooms. My only complaint would be that the storage lockers were not very big and there wasn’t a ton of space to store stuff, so in a full room of 8 people, there was quite a bit of everyones belongings strewn about the floor.

A restaurant just down the street that I had breakfast at was absolutely amazing – House of Small Wonder. Definitely check them out instead of the hostel breakfast – but either get there early or make a reservation! 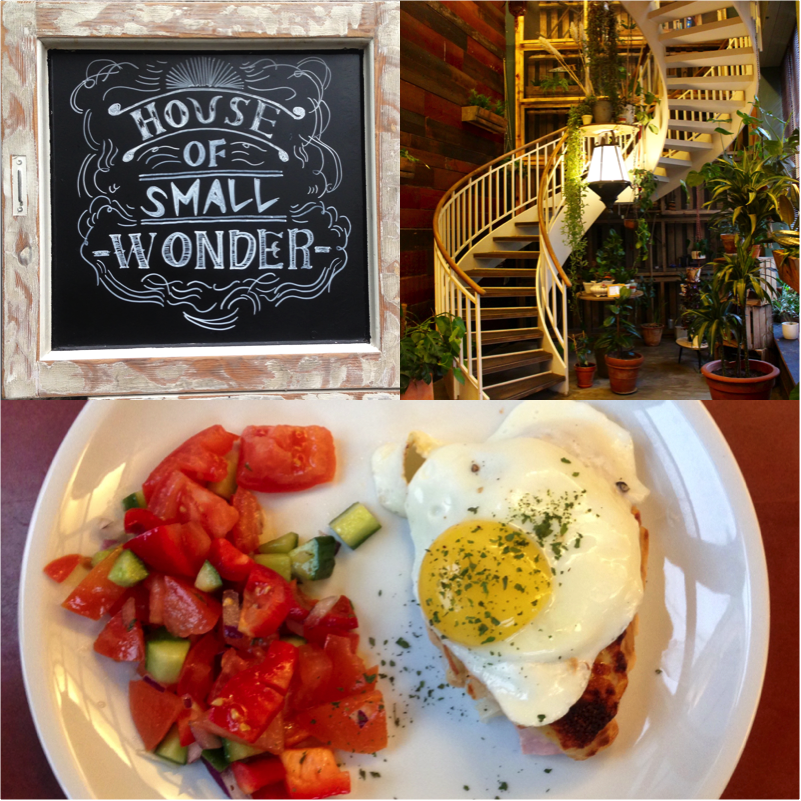 One of the first things I meandered by was this beautiful green-capped cathedral. It is a beautiful gem near Museum Island, but the entrance is not free, and it is not included in the Museum Island 3-day pass. Maybe a good rainy-day spot to walk through, but overall just a nice building to walk by. 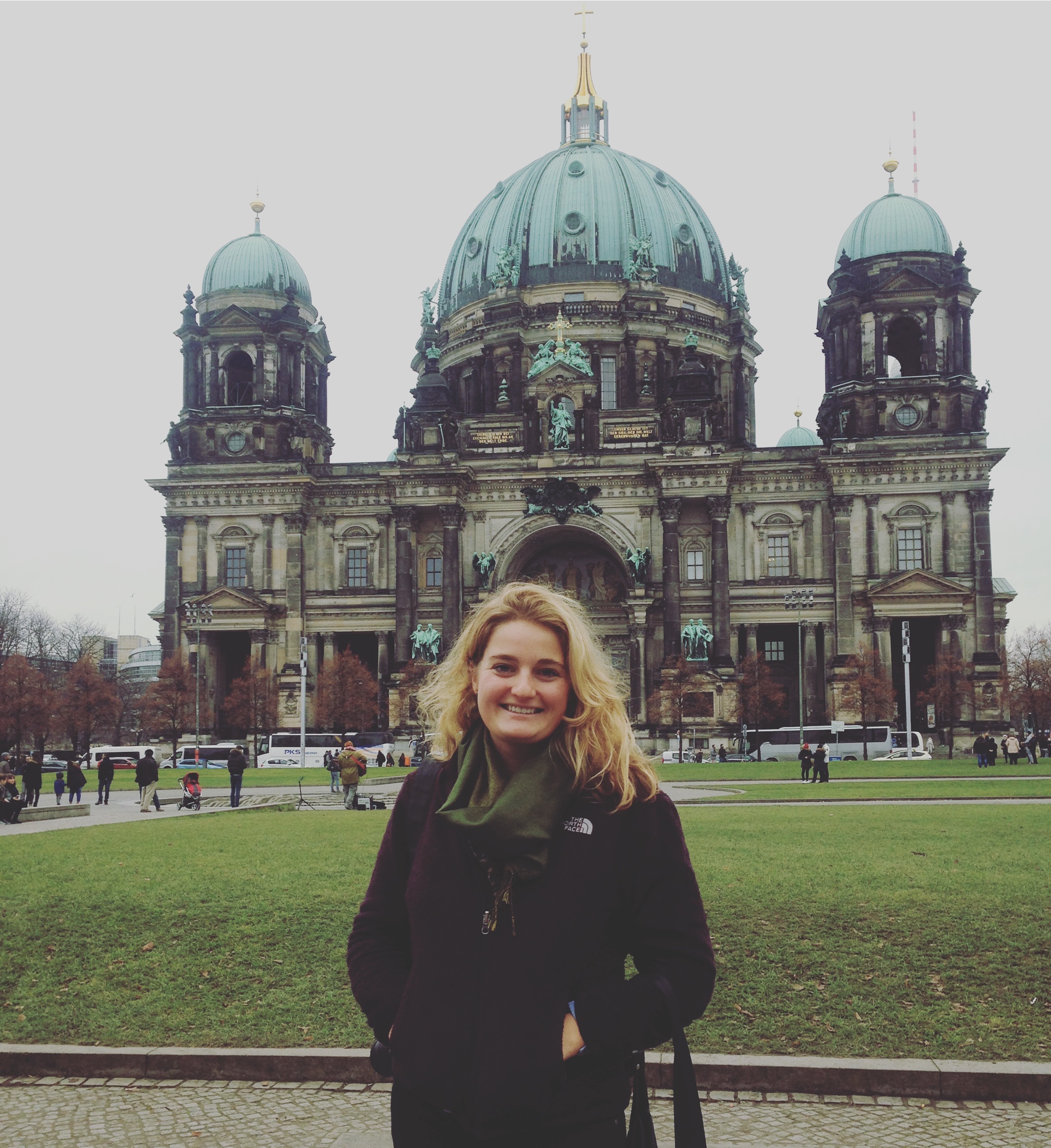 Museum Island is a stretch of many museums on a little island in the Spree river right in the heart of Berlin. It is a great visit for anyone interested in museums, as they offer 3-day museum passes, which grants you access to all the museums for a very reasonable fee – bring your student ID for an extra discount! 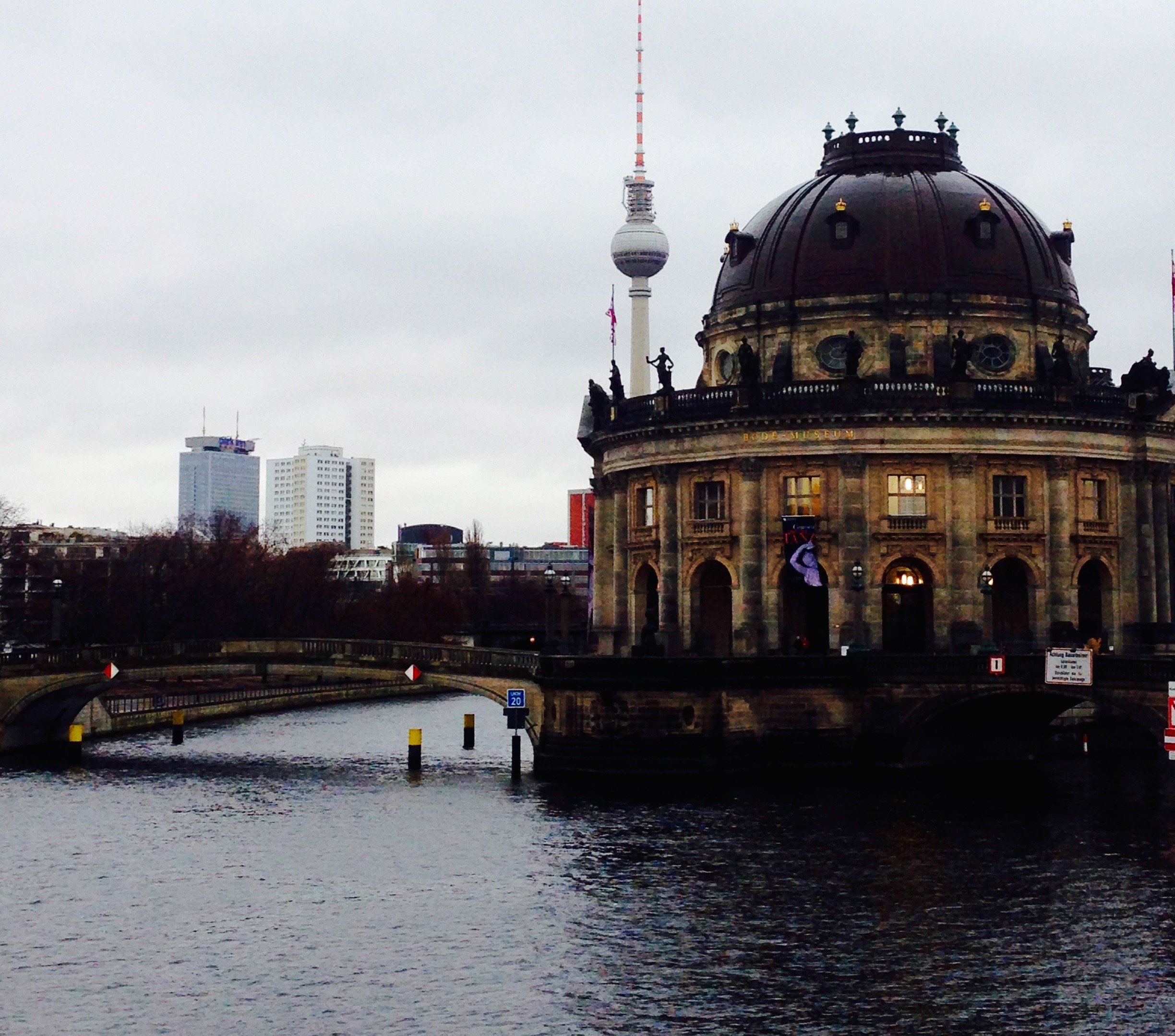 This is one of my favorite museums I’ve ever been in. It houses architectural ruins and important historical artifacts from ancient Turkey and the Middle East. I didn’t know anything about this period of history, so it was super interesting and a great thing to do on a rainy day in Berlin.

The Christmas markets in Berlin run from the 23rd of November until the 31st of December, and they are really a fun thing to experience. It’s unfortunate that there was a senseless act of violence at these markets just days after I had the pleasure of walking about them, eating all the different German foods and sipping on glühwein to stay warm. I would highly recommend a visit to Berlin during the Christmas season – but be sure to bring warm clothes for walking around the markets.

My favorite market was in Alexanderplatz, what seemed to be the center of the city.

This is one of the best known landmarks in Germany, and during the holiday season, the massive decorated tree in front is an added bonus. There were lots of assemblies and protests going on around the gate, so just be aware that the crowds could get out of hand, but for the most part there was a large police presence keeping it under control. It is an important monument for the history of Germany as well as symbolic of European unity and peace.

Memorial to the Murdered Jews

This was one of the eeriest and most unique monuments/holocaust memorials I have ever visited. At first I thought there was an issue with my Google maps, for when I walked here, there was absolutely no informational signs or placards stating that this was the memorial to the Murdered Jews. It consists of 2,711 concrete slabs of different heights. It is completely free, and people wander in and out of the slabs, often not sure of what they are walking through. It is an evocative design – as you walk further in, the slabs get taller, swallowing you up in a maze of concrete. I felt more and more uncomfortable the farther in that I walked, and even though I could see straight lines leading back out to the street, it still struck a chord of fear within me that I would somehow get stuck. It’s a controversial memorial – some find the lack of information appalling and there have been many disputes about the memorial over the years since its construction in 2005. While I find the lack of information a bit strange, I think it is a powerful memorial that everyone should walk through and be aware of. Don’t be the uninformed person taking inappropriate selfies or jumping around on the concrete blocks.

This historical spot was the best-known crossing point on the Berlin Wall between East and West Germany during the Cold War. I found it a bit funny that from the German side looking into the American side, one can clearly see McDonald’s and KFC logos shining bright in all their glory.

The final stop on my tour around all the sights of Berlin was the East Side Gallery, a long section of the Berlin wall that has been converted into an art gallery. It is completely free to visit, as you just walk along the murals which are protected by a fence. There are some really powerful pieces that draw on the political and historical past of not only Germany but the whole world. I would say this is an absolute must-see when in Berlin. To get there from the city center, take the S or U-bahn trains to Warschauer Str. stop and follow the signs (and most likely the tourist crowd) to the wall.