“To spend time alone in the Australian bush is to experience our union with nature. It is powerfully reassuring.” ~ Jack Thompson

When most people think of traveling to Australia, they imagine the famous beaches and landmarks of Sydney, the hipster-cosmopolitan vibes of Melbourne, or scuba diving on the Great Barrier Reef off the coast of Cairns. Everyone knows that the outback exists of course, but being so vast and considered to be the “middle of nowhere,” few backpackers and travelers tick it off the list of Australia destinations during their travels. Many who may think they’ve seen “most” of Australia skip the Northern Territory all together, never getting to experience the wonder of the outback with their own eyes.

My 3-day Uluru tour into the outback began at 6 a.m. in the cold, dark morning in Alice Springs. I waited out front of my hostel, Jump Inn Alice, with a group of other travelers, standing in silence. The only conversation you could hear were the crickets in the grass in the distance. After a few moments of waiting, a big bus and trailer pulled up, and a young woman jumped out. We all shuffled our belongings into the van and loaded ourselves on the bus, ready to dive into the outback with Mulgas Adventures. She was the Sacagawea to our Lewis and Clark expedition, guiding us through the great unknown of the sprawling land of the Northern Territory. 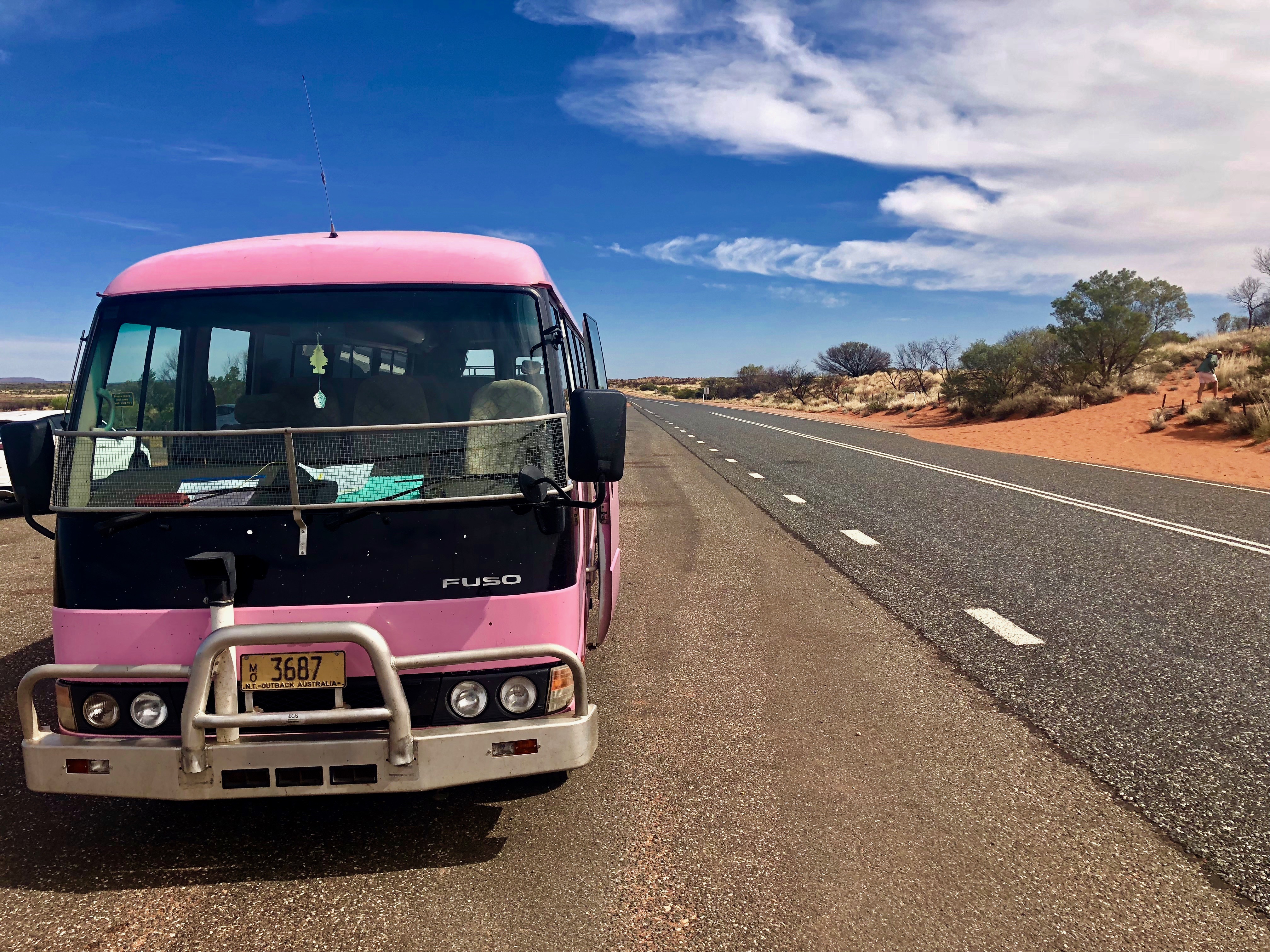 The first stop was at a camel farm in the red center of Australia. I checked my GPS, and the pulsing blue dot could not have been more perfectly aligned right in the middle. This gave us an opportunity to buy some snacks for the rest of the long drive we had ahead of us. Another feature of this stop was the chance to sneak in a quick sunrise camel ride. The farm had dozens of these impressive beasts and an adorable baby kangaroo that hopped about in his pen. 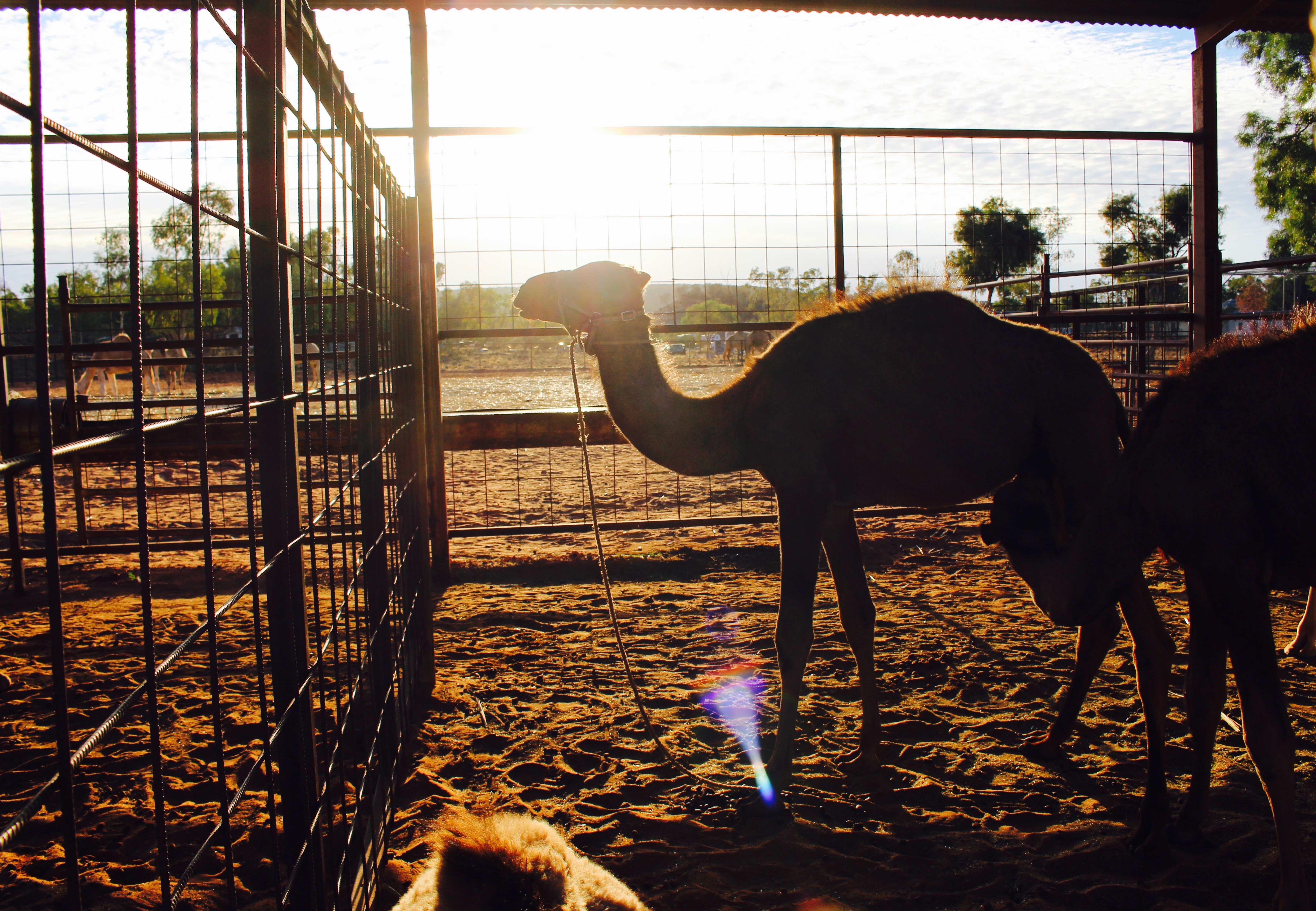 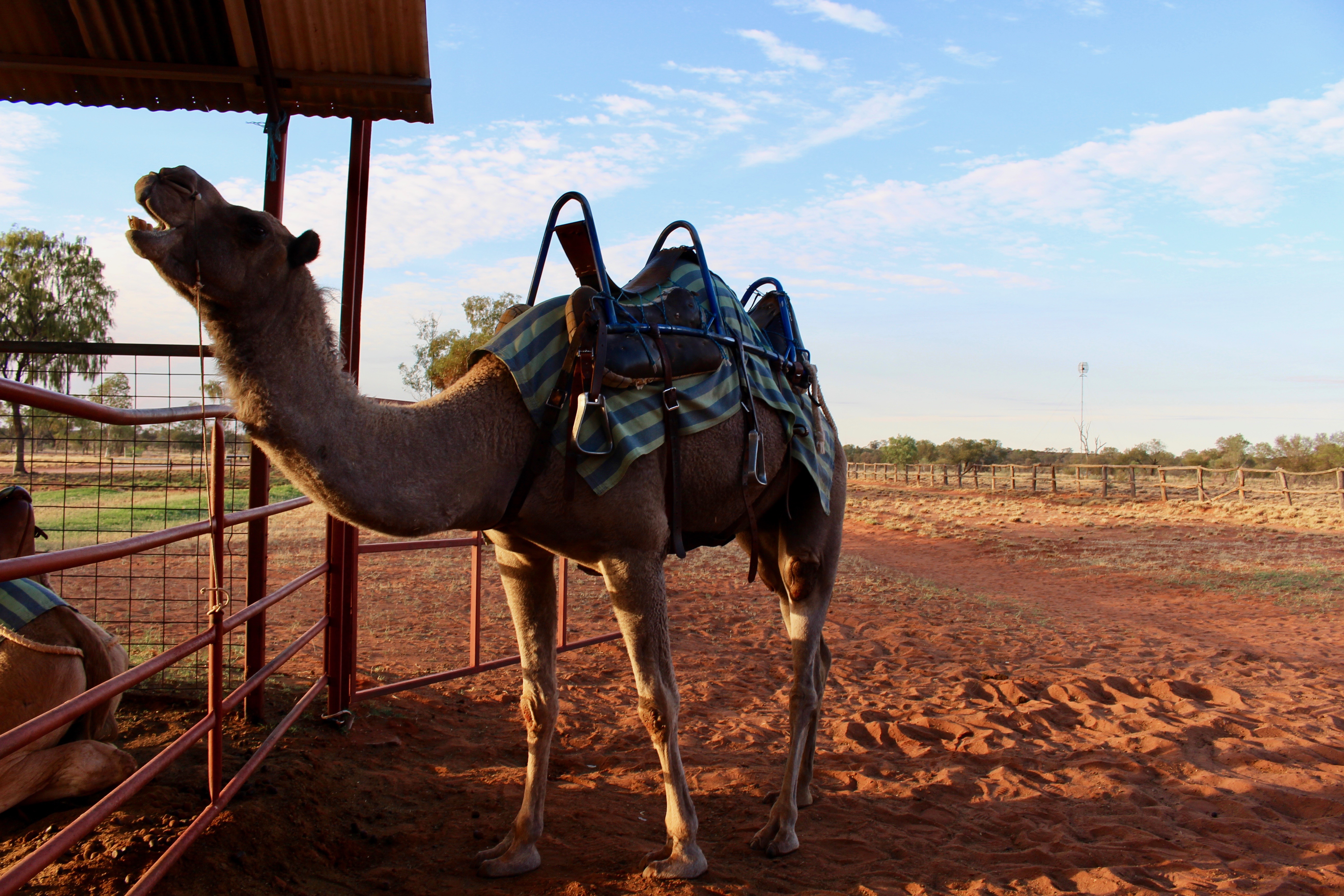 Another stop along the way was at an emu farm, where I got to see these infamous birds up close for the first time. They are peculiar creatures, staring at me inquisitively as I approached their enclosure. 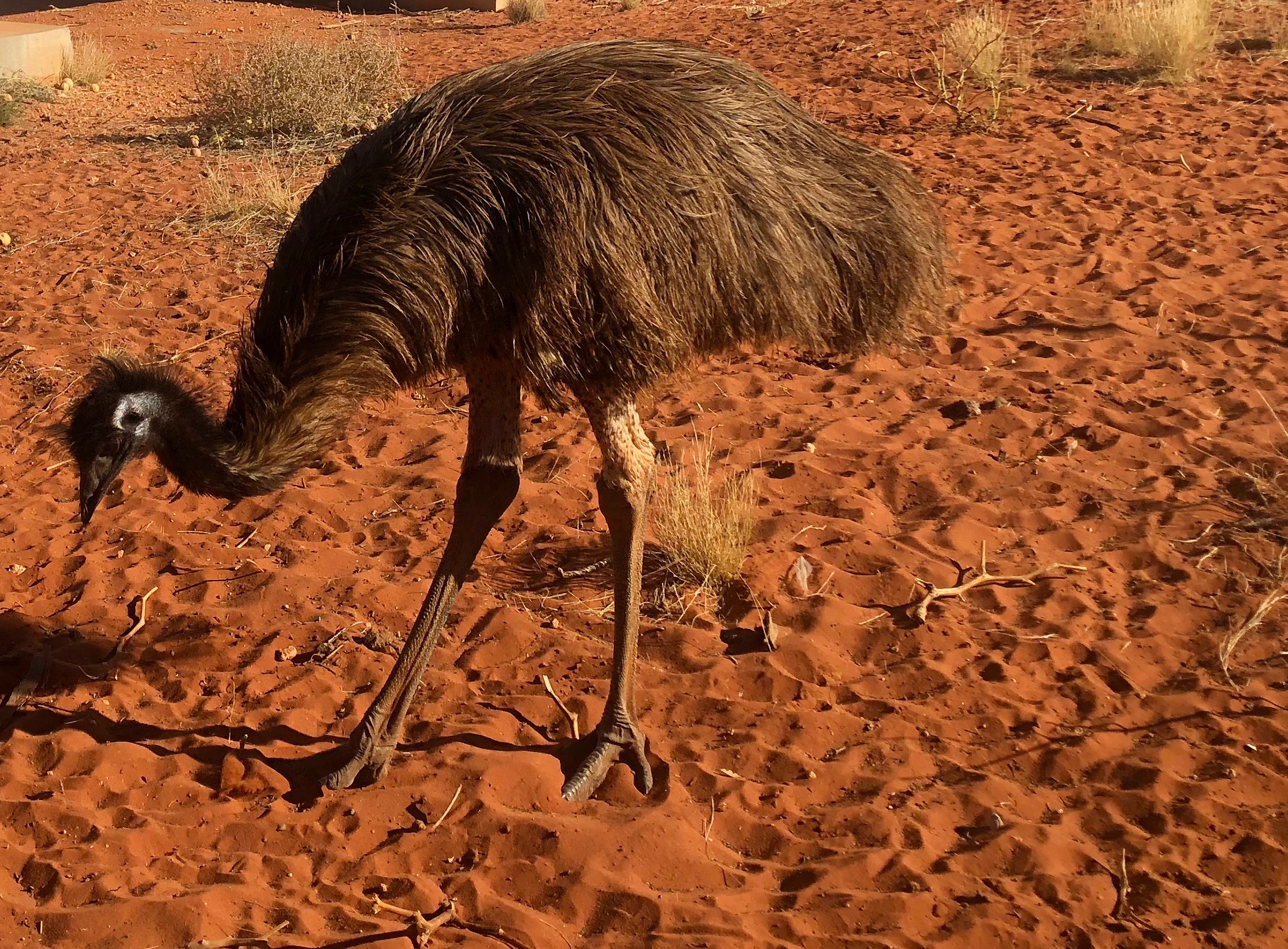 One of the first walks we took on the tour was a brief hike through a part of Kata Tjuta, formerly known as The Olgas. They are a group of dome rock mountains, massive structures with a gorge to walk through. It was a perfect introduction to the rock formations and cultural heritage of the aboriginals of the Northern Territory. It’s a sacred ceremonial site for the native Anangu aboriginals, with legends and mythology woven into the sandstone matrix that holds these rocks together. 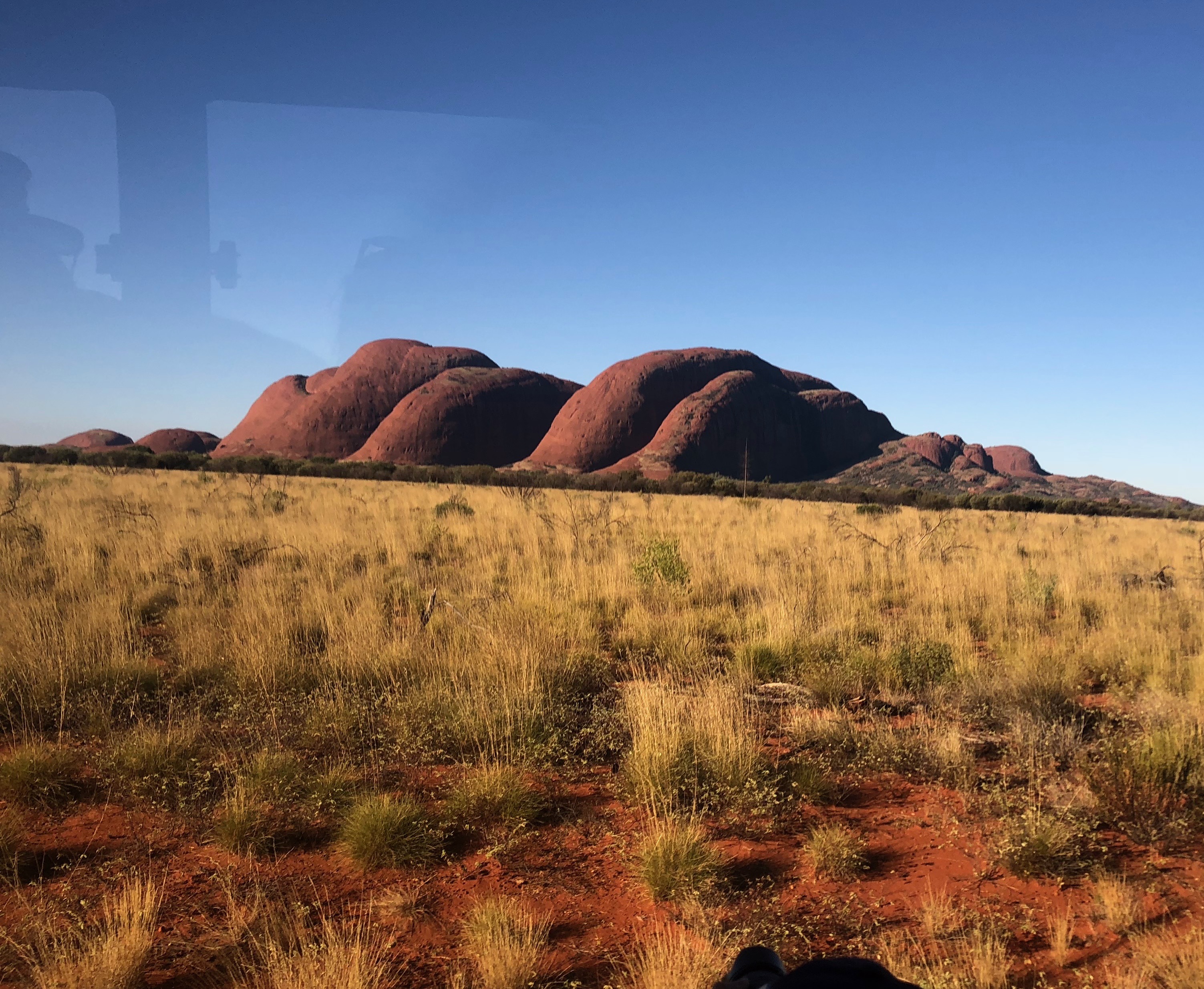 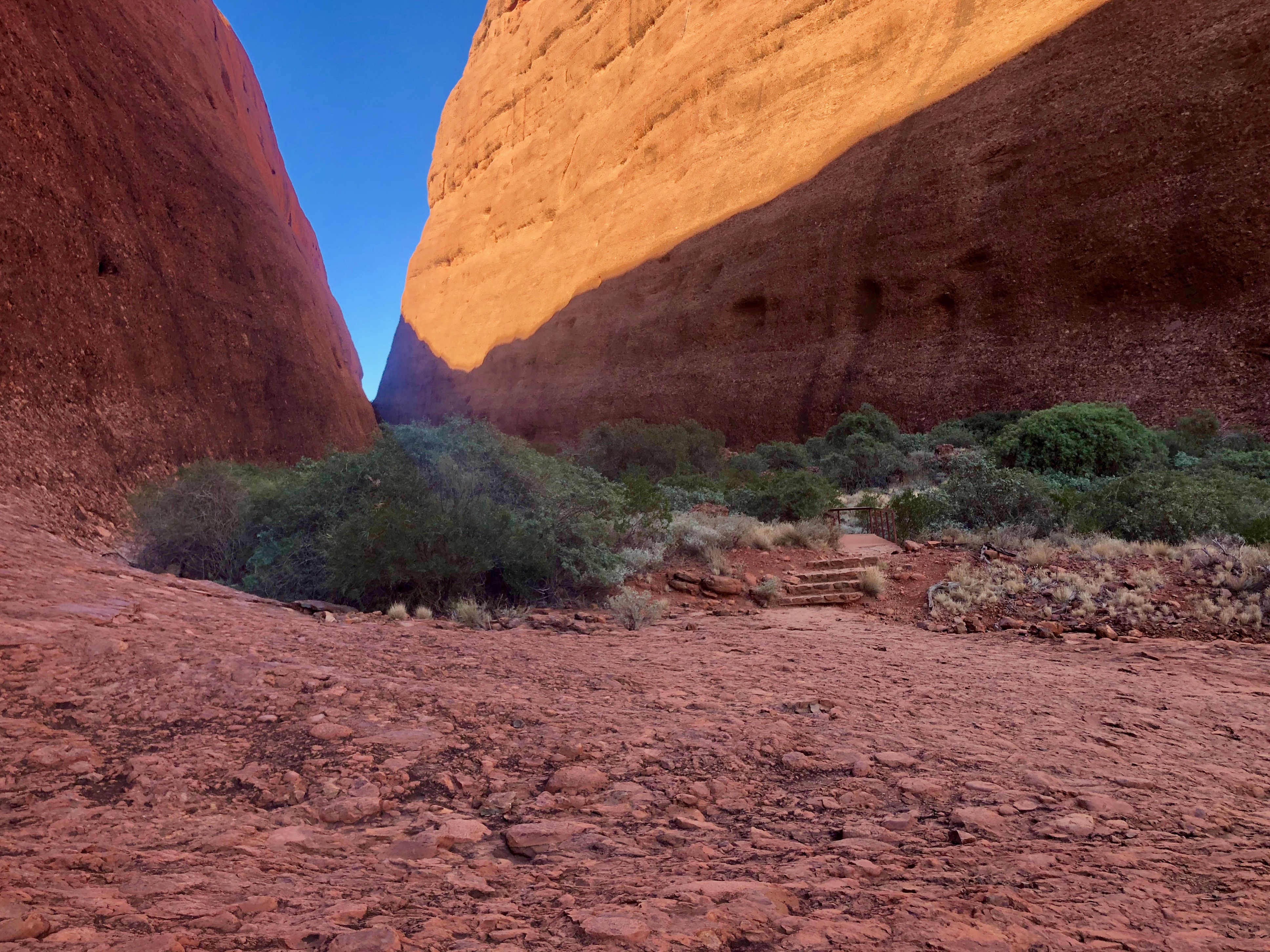 The long first day of driving was all worth it at the end when we enjoyed freshly popped champagne with a sunset view of Uluru. The crisp bubbles quenched the dry thirst that had taken over our mouths from walking in the warm sun and drive through the dust of the bush. 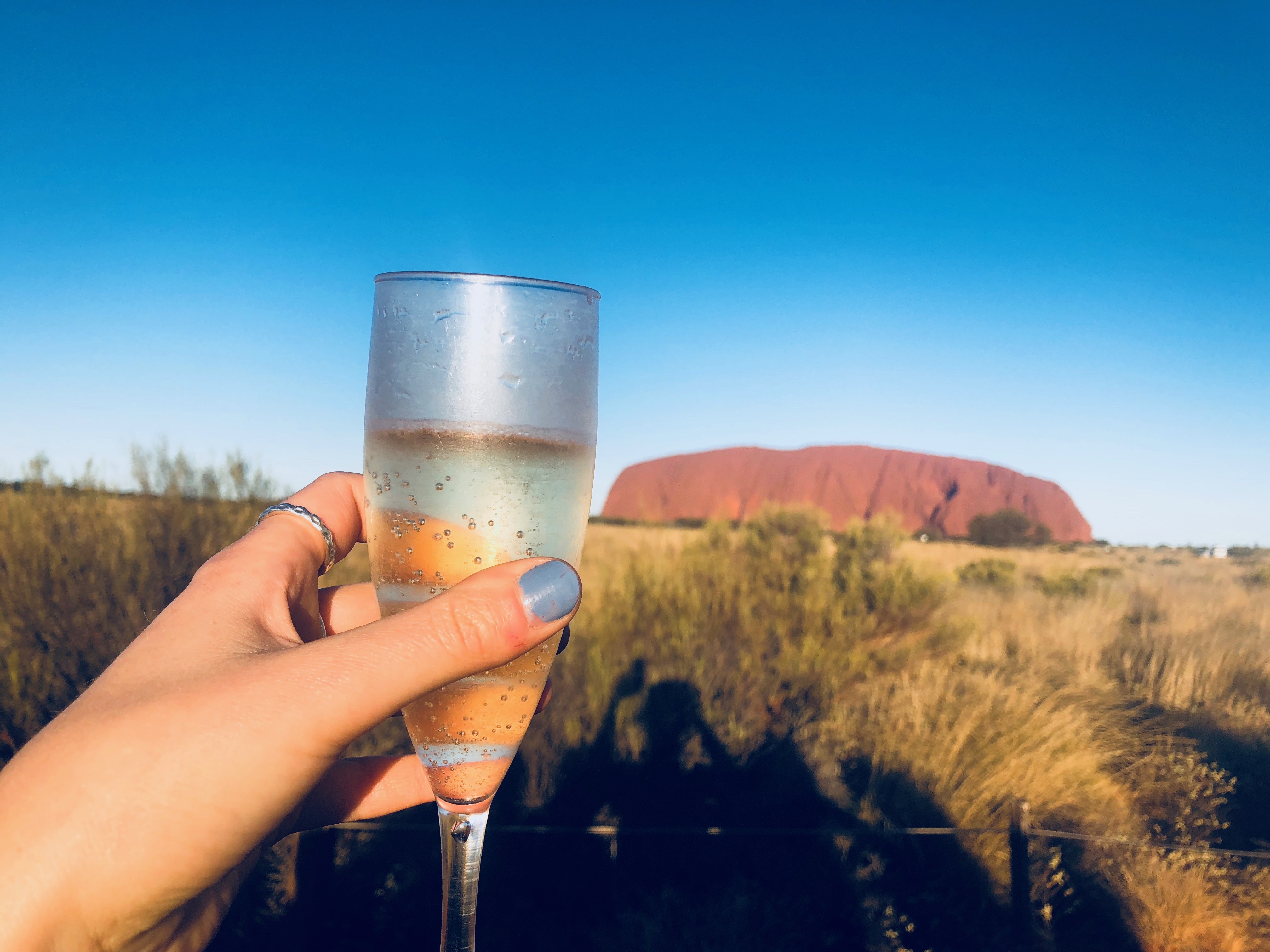 Sipping our beverages, we got to watch the light show put on by mother nature that takes place every evening. The magnificent rock changed color by the minute, from a rusty red to a deep purple, before the sun vanished over the horizon and it was time to head back to camp to cook dinner. 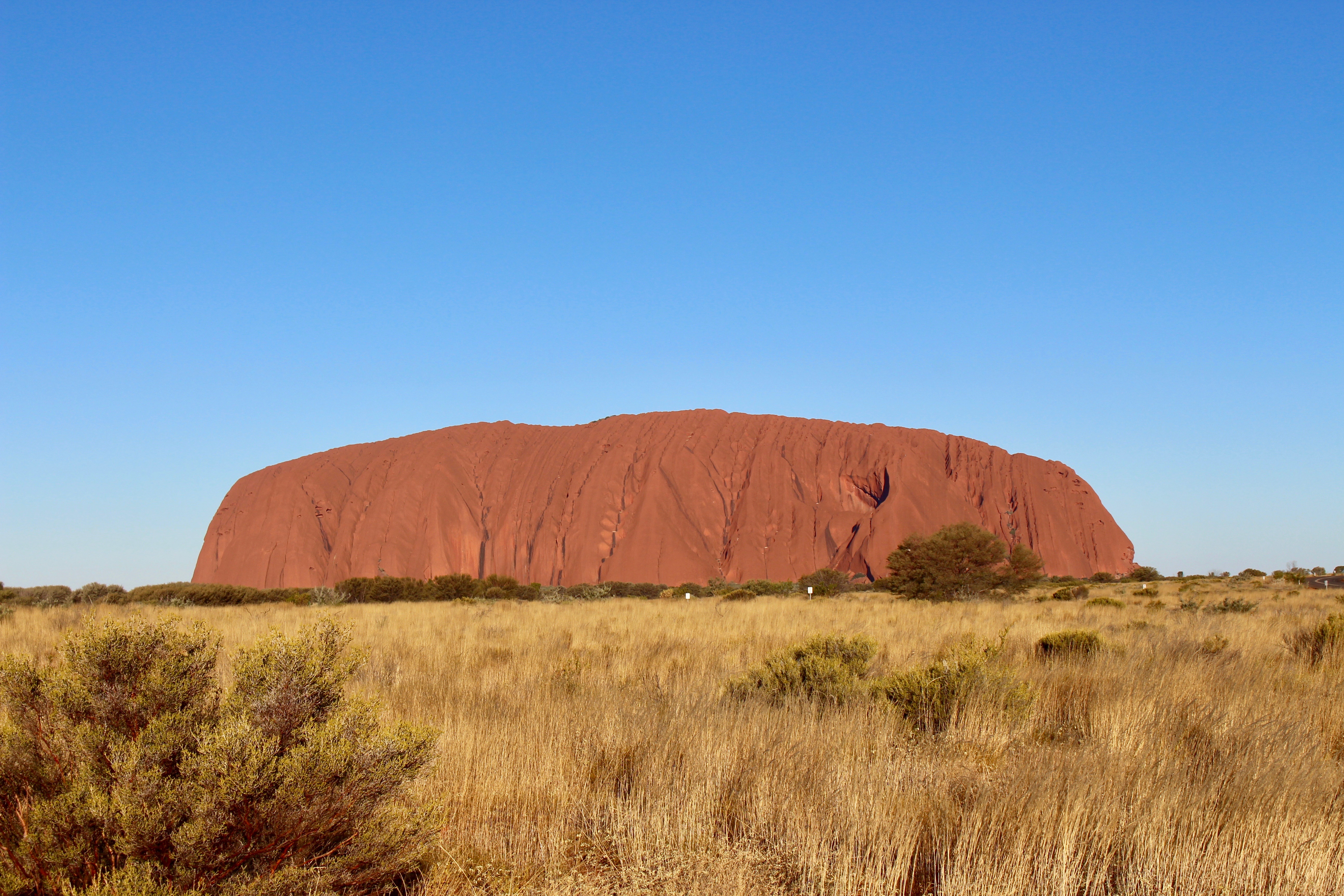 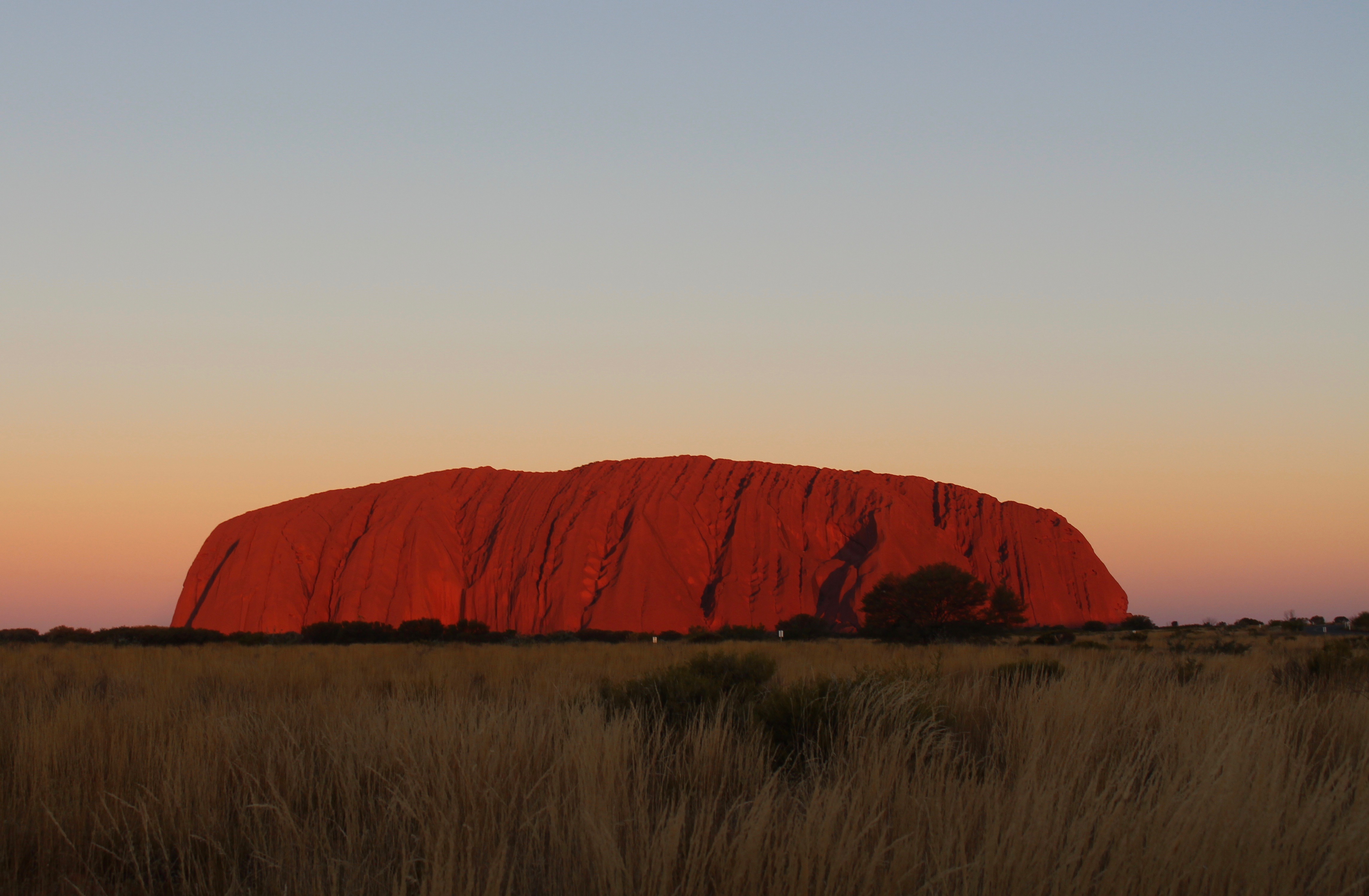 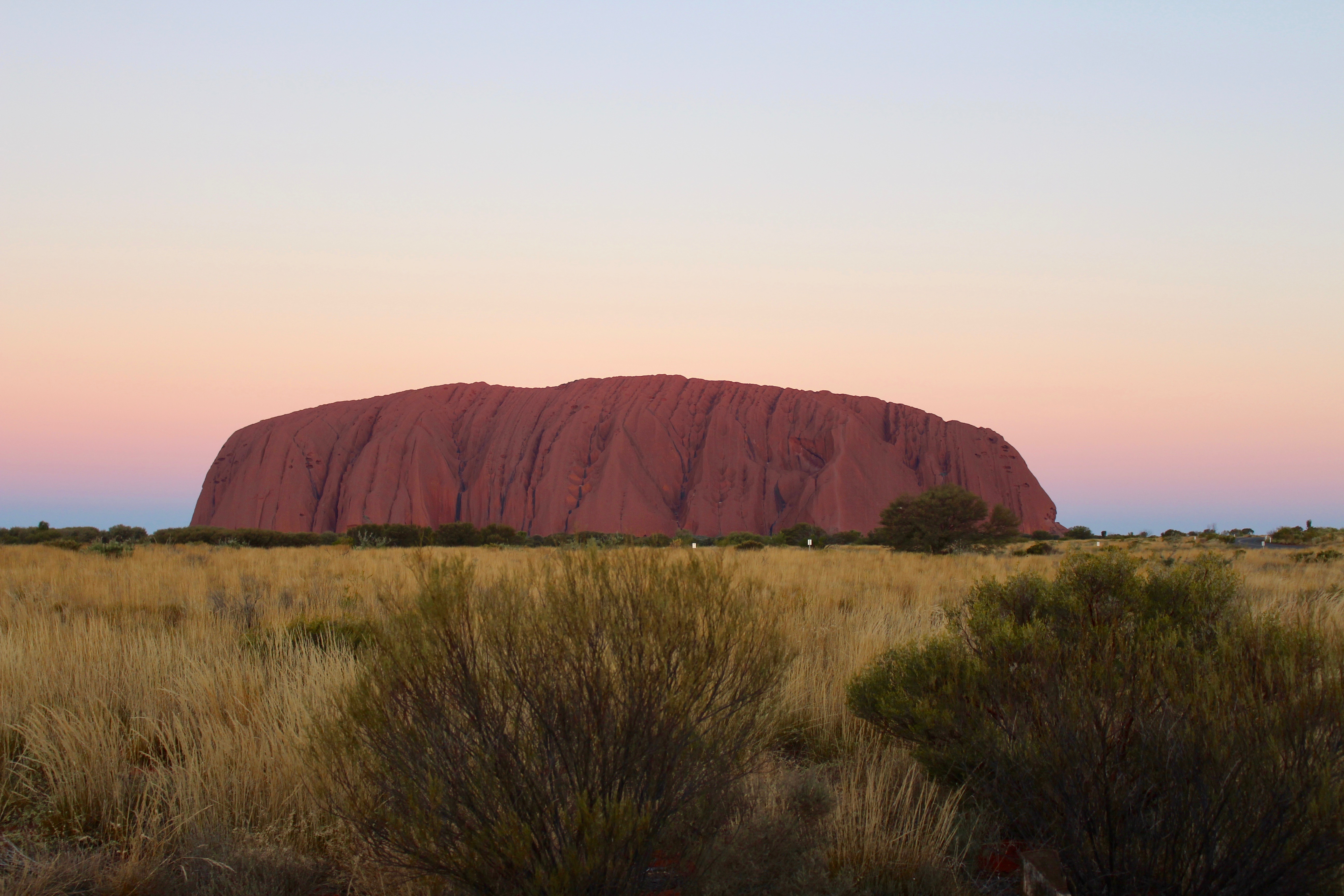 Sleeping Under the Stars

This was a first for me – sleeping outside in a swag, blanketed in stars that twinkled fiercely without the interference of urban light pollution. No tents, no cabins. The swag was an outer casing to keep our sleeping bags off the ground and seal in the heat as the desert air cooled off. There were no bugs to pester us, making it the perfect conditions for sleeping outdoors. 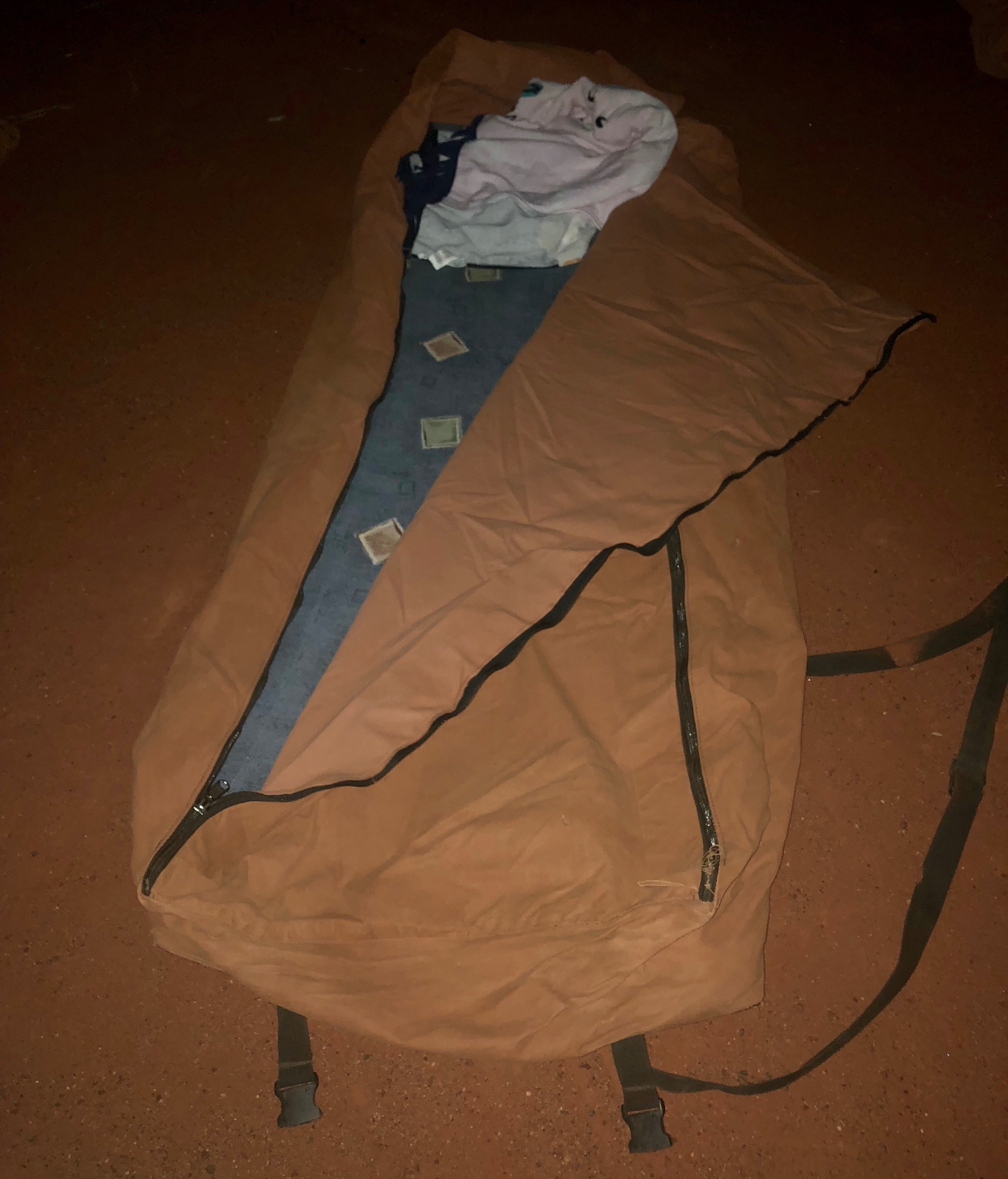 The next morning was an early start to make it to the base of Uluru to begin a walk around the entire bottom of the rock. It was a cold morning, the bitter air was a reminder of the harsh, unforgiving nature of the desert. The sun will bake you by day, and the dry, cold air will freeze you by night. We managed to stay warm, however, as we shuffled around the base, admiring both the stunning beauty of Uluru and the pinks and purples that illuminated the sky as the sun ascended above. The walk is pleasant, mostly flat, and the distance gives a perspective on just how massive this landmark is. We stopped along the way with our guide, who provided us with stories about features of the rock, and aspects of aboriginal culture that were eye-opening. Up close, you could see the erosion scars in the rock, natural pieces of art for the eye to enjoy as we marched 10 kilometers. 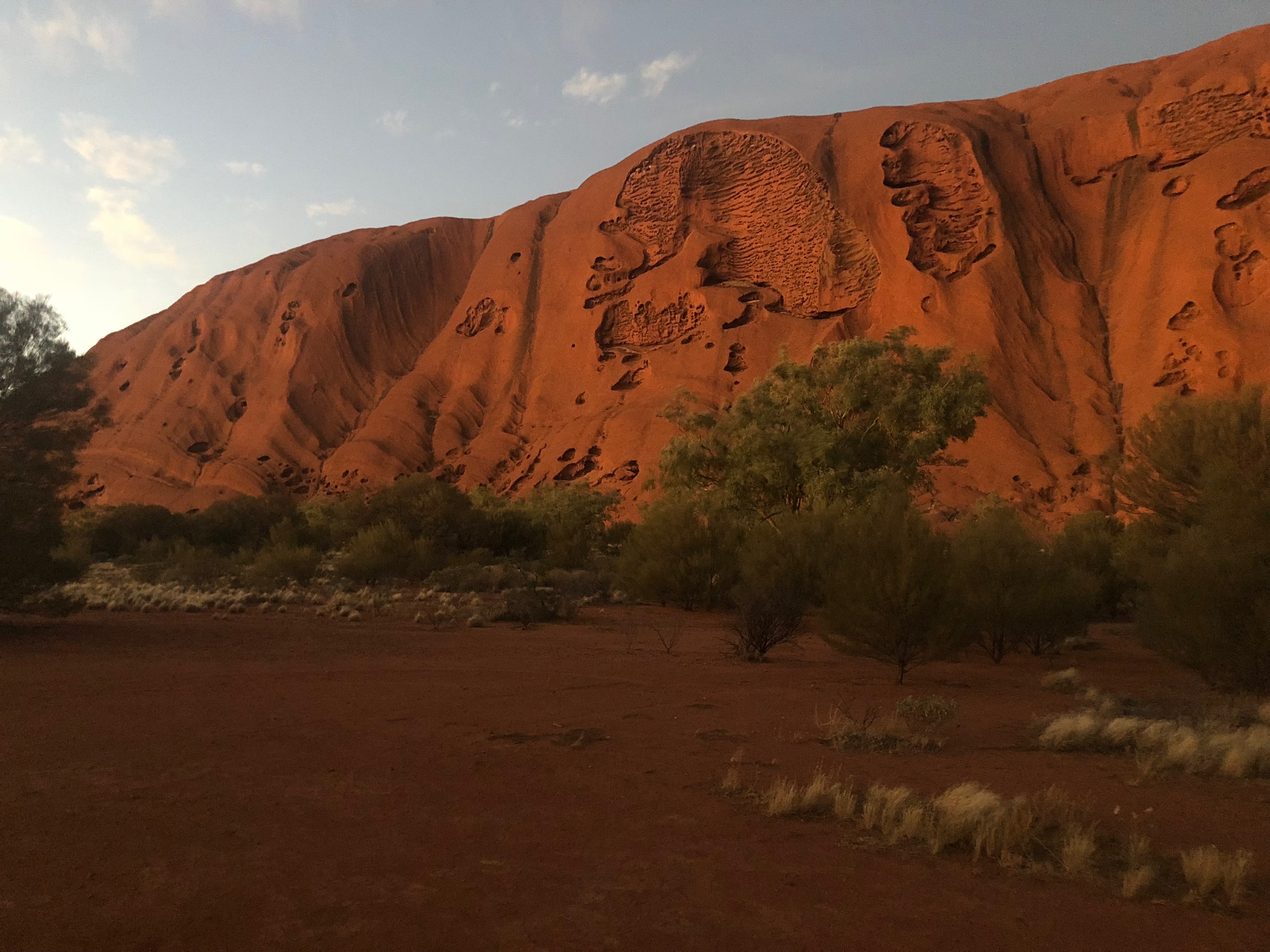 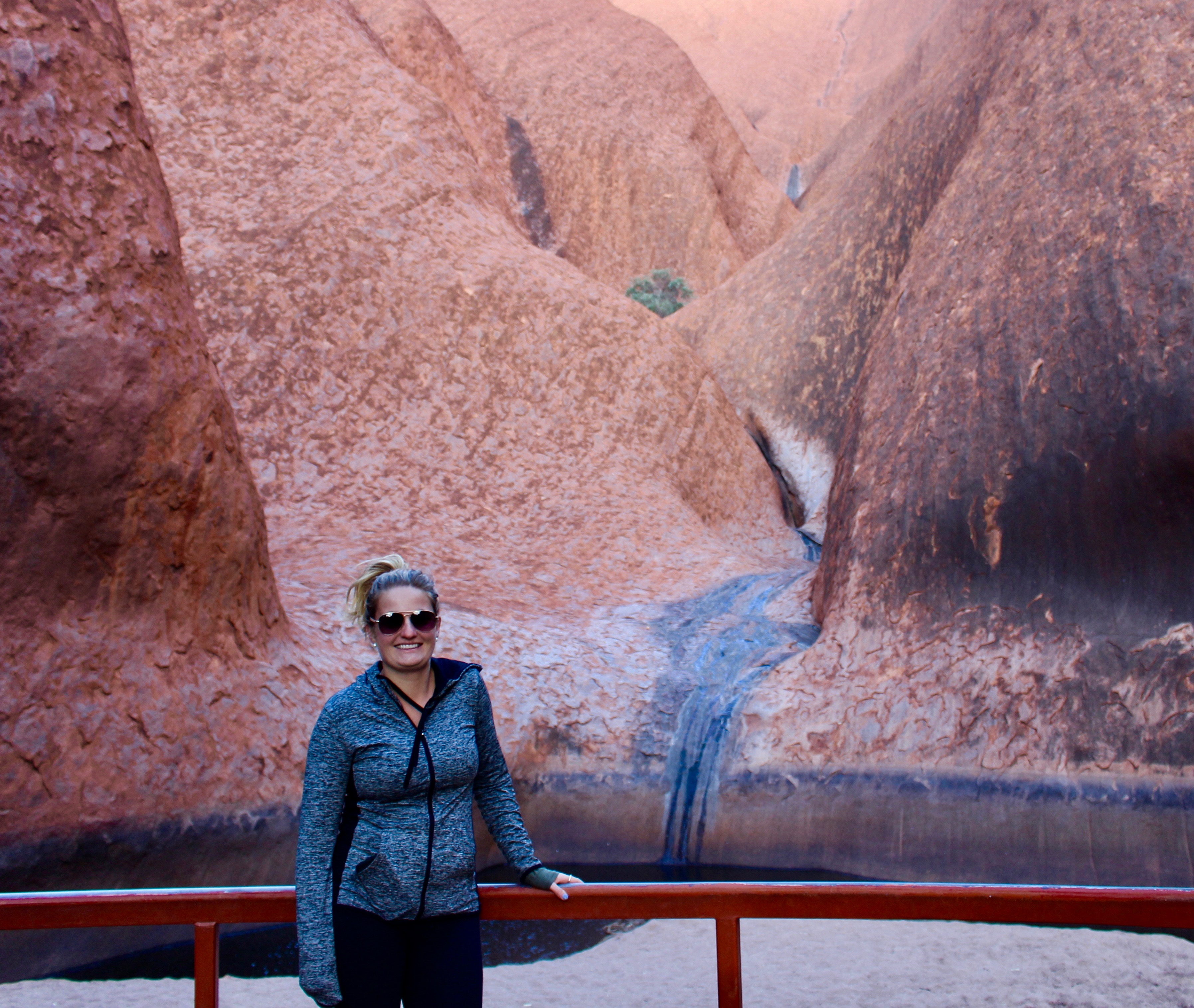 After our base walk, it was time to head back to camp for lunch before packing up and hitting the road again. One thing that struck me during this trip was the scale of vastness that is the outback. It takes ages to move just a tiny bit on the map. Australia is a huge country, and the outback is a never-ending land.

Midway through the drive, we stopped at a salt lake for a chance to stretch our legs and connect with the earth underfoot. Shoes and socks off, we waddled across the rocky, salty crust that was caked on top of the thick mud. Some trod lightly and made it out unscathed. Others broke through the crust and found themselves with a thick coating of mud all over their feet and ankles. I managed to scramble out with one foot clean, one muddy. 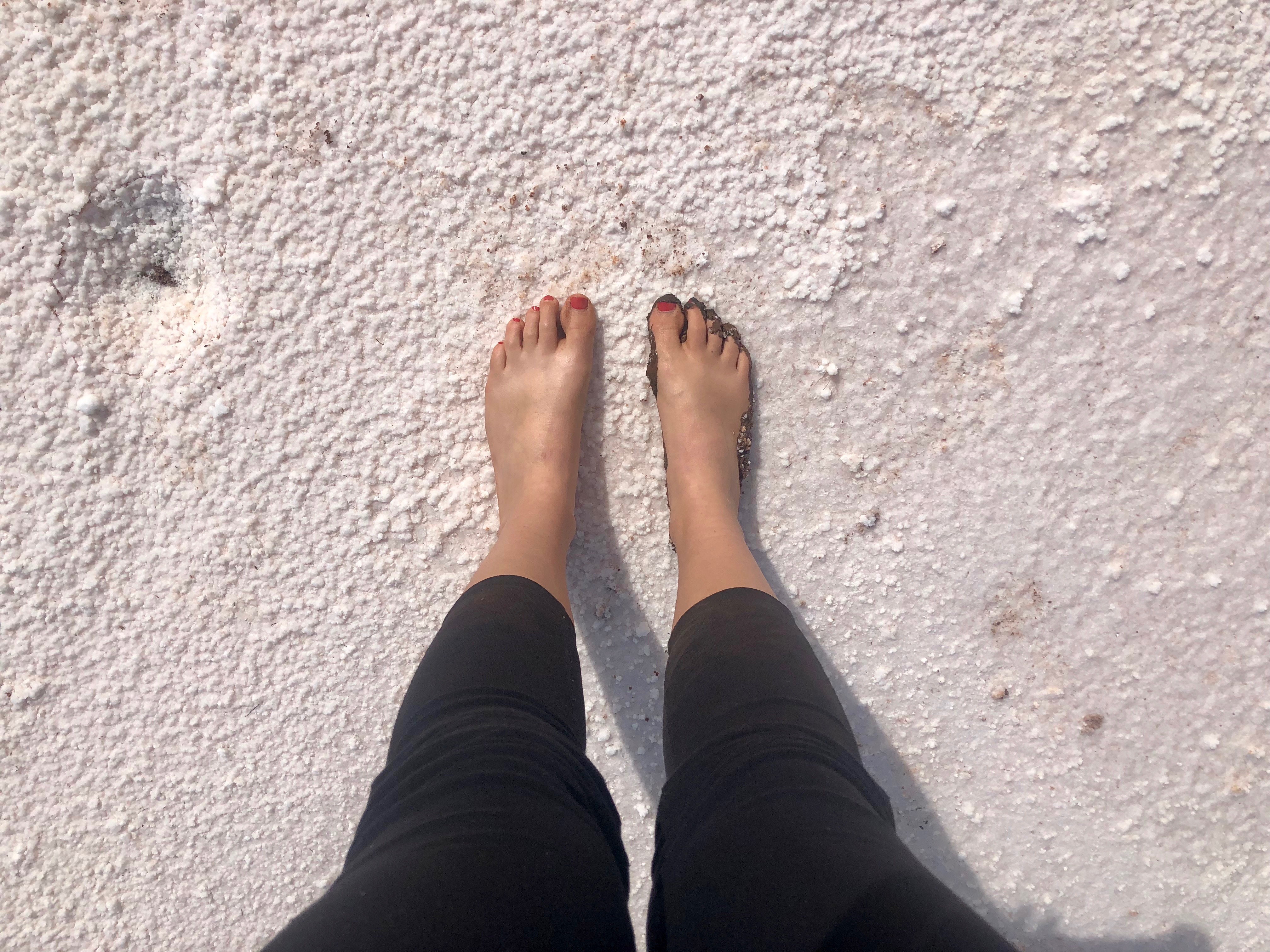 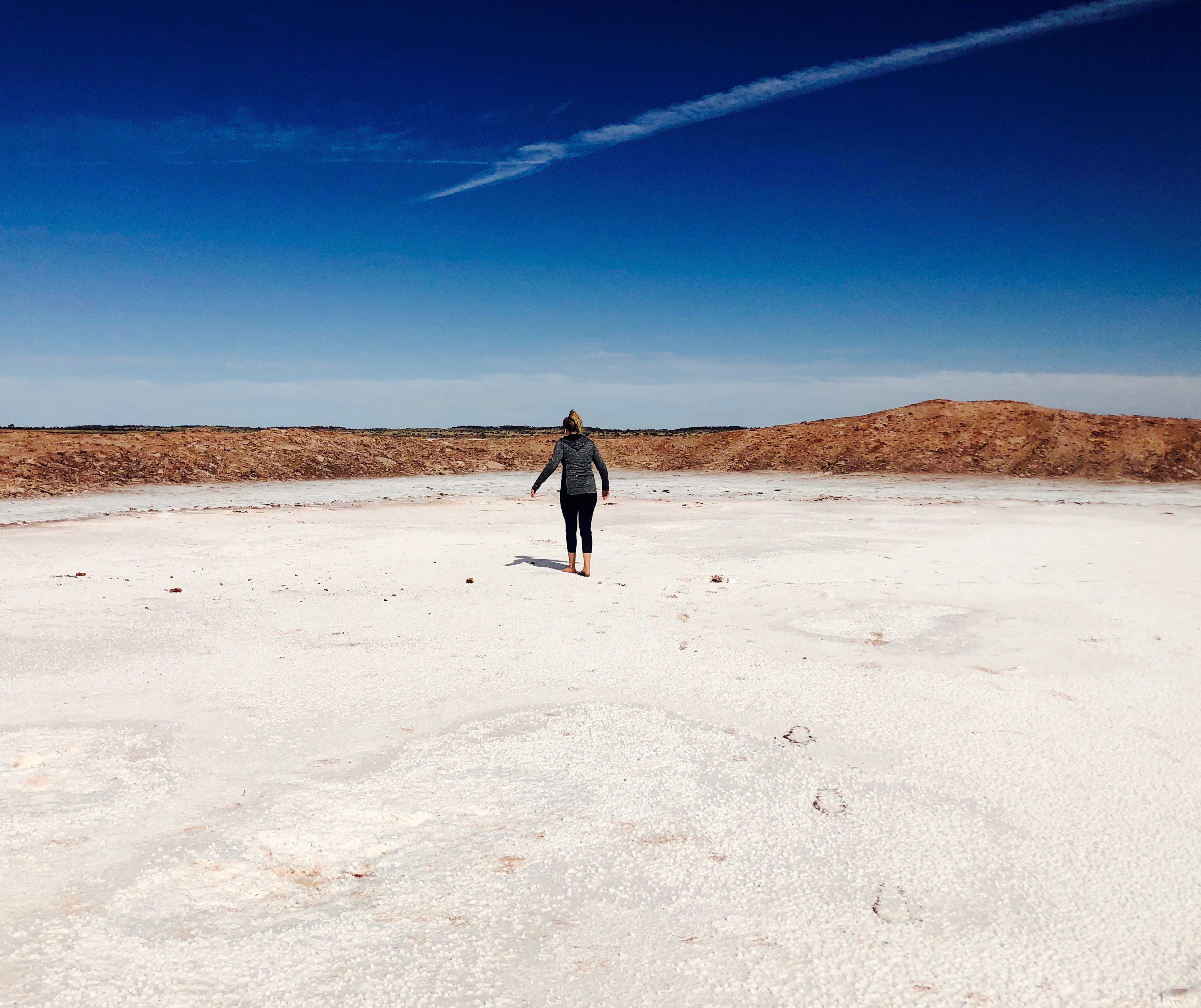 After our salty stop off, it was time to carry on to set up at our new campsite and get a glimpse of the outback sunset in a different part of the territory.

Our final day in the outback started early again, packing up our iconic pink bus and speeding off to Kings Canyon to begin our hike before sunrise once again. The climb started with the hardest bit first – heart attack hill, which was an upward trek over a natural staircase. It was moderately challenging, but the surroundings were so pretty that stopping for a breather was a pleasant break to take. 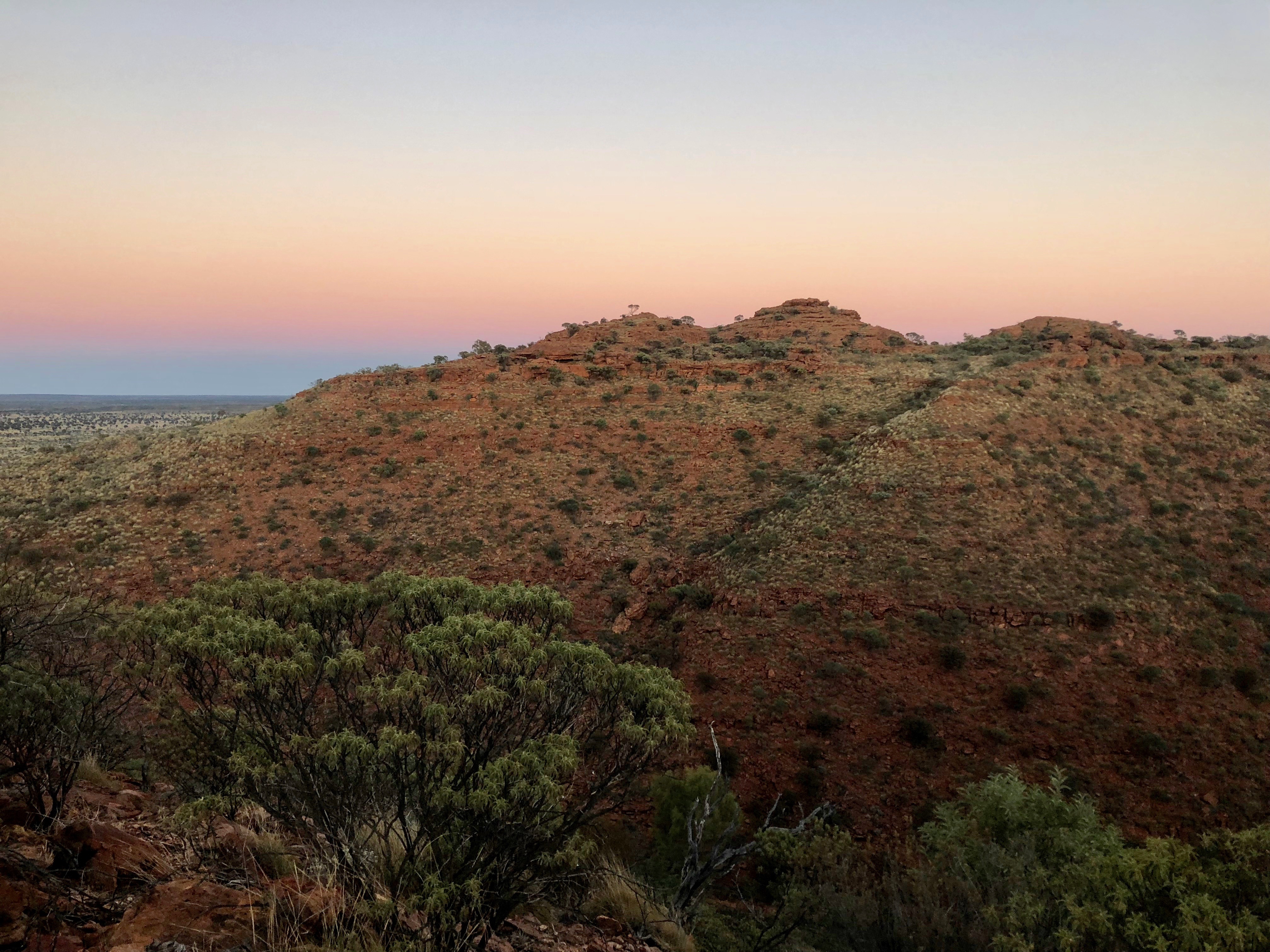 Once on the top of the canyon, we continued our hike, stopping to learn about indigenous plant species and other stories of the aboriginals who have inhabited this area of the outback for centuries. The rest of the hike was manageable, and it provided stunning views of the deep gorges and the Kings Creek that flows below. We bellowed a collective howl into the canyon and listened to it echo off the walls, a chilling and beautiful sound to hear. 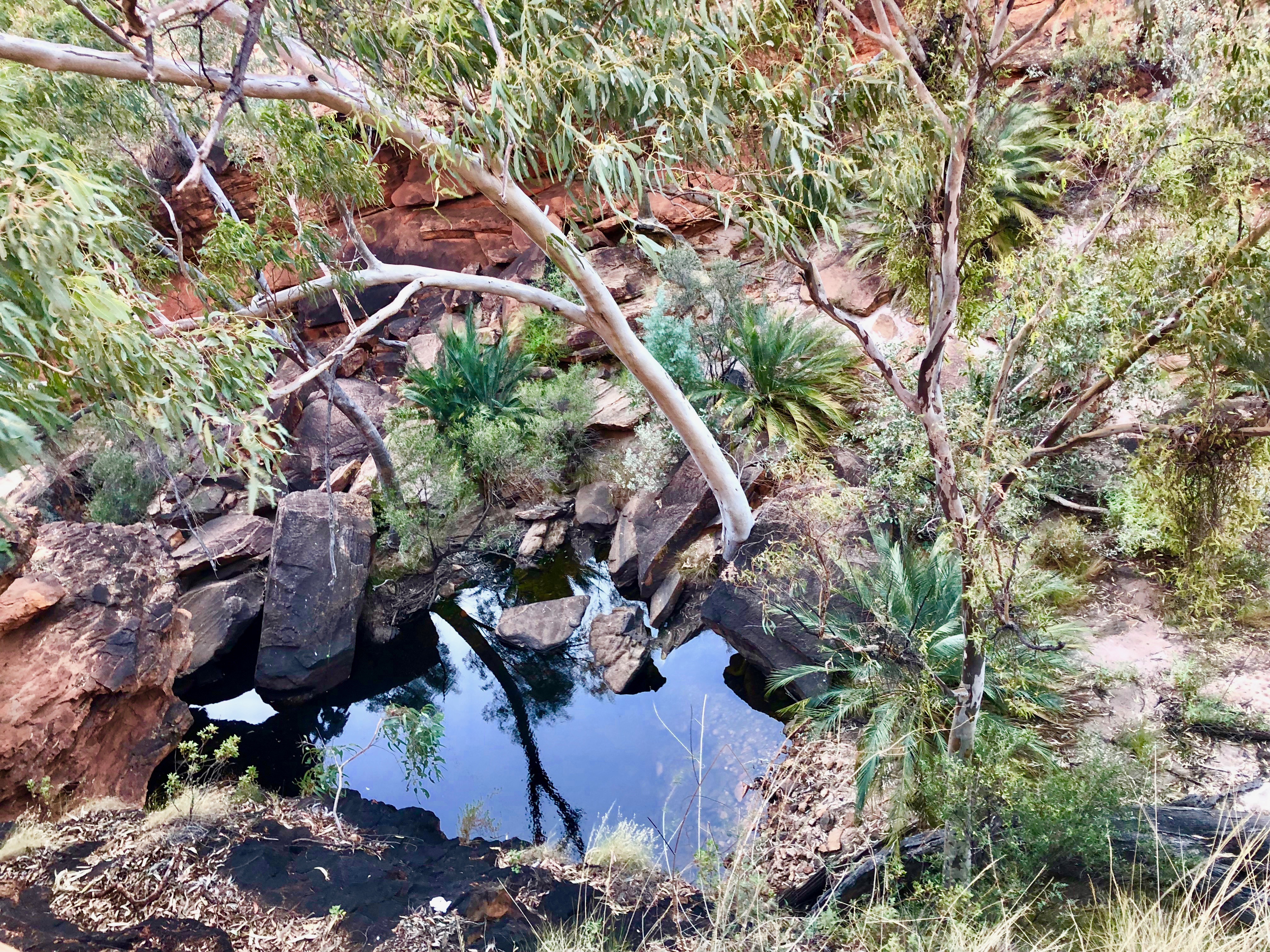 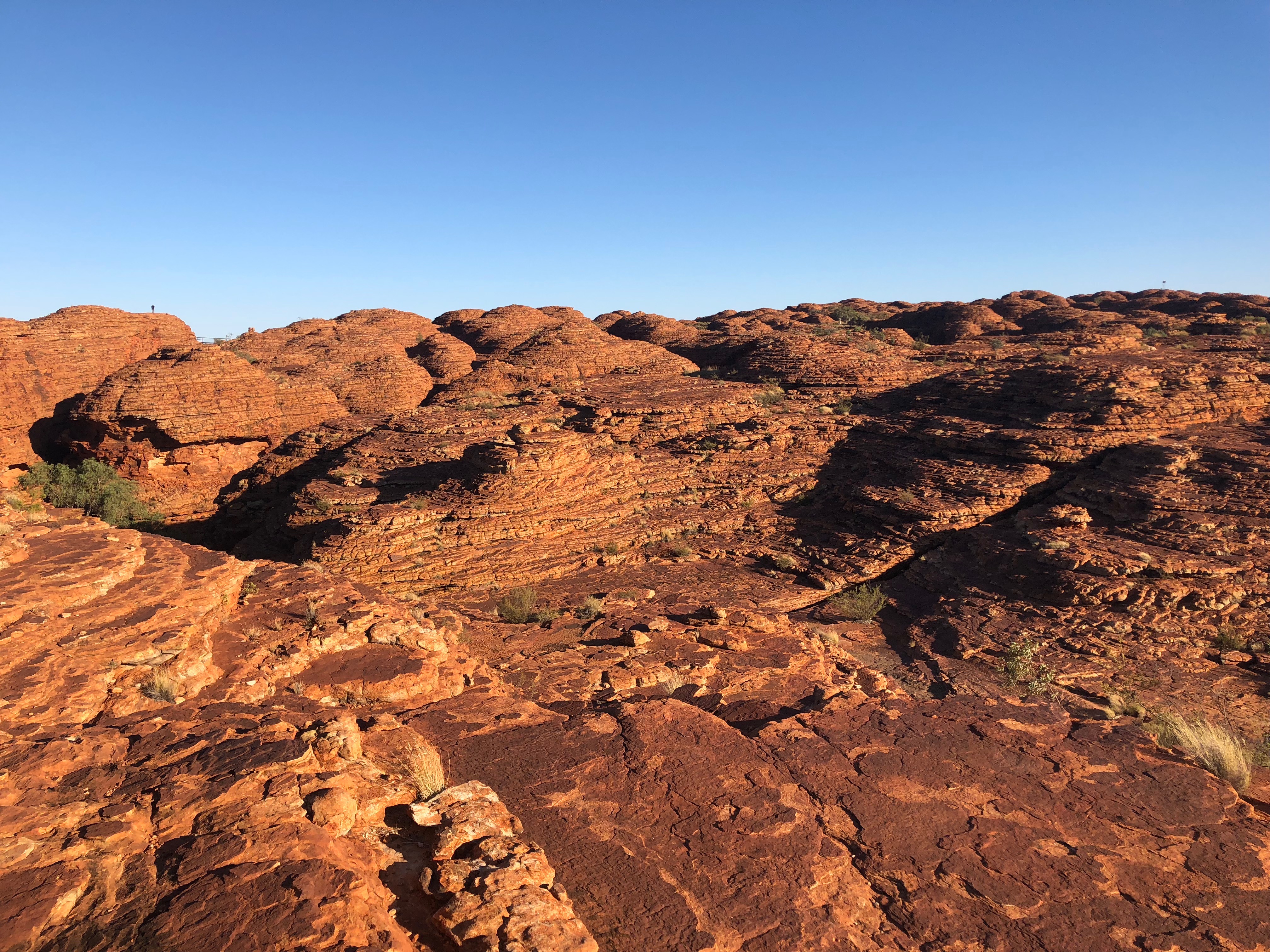 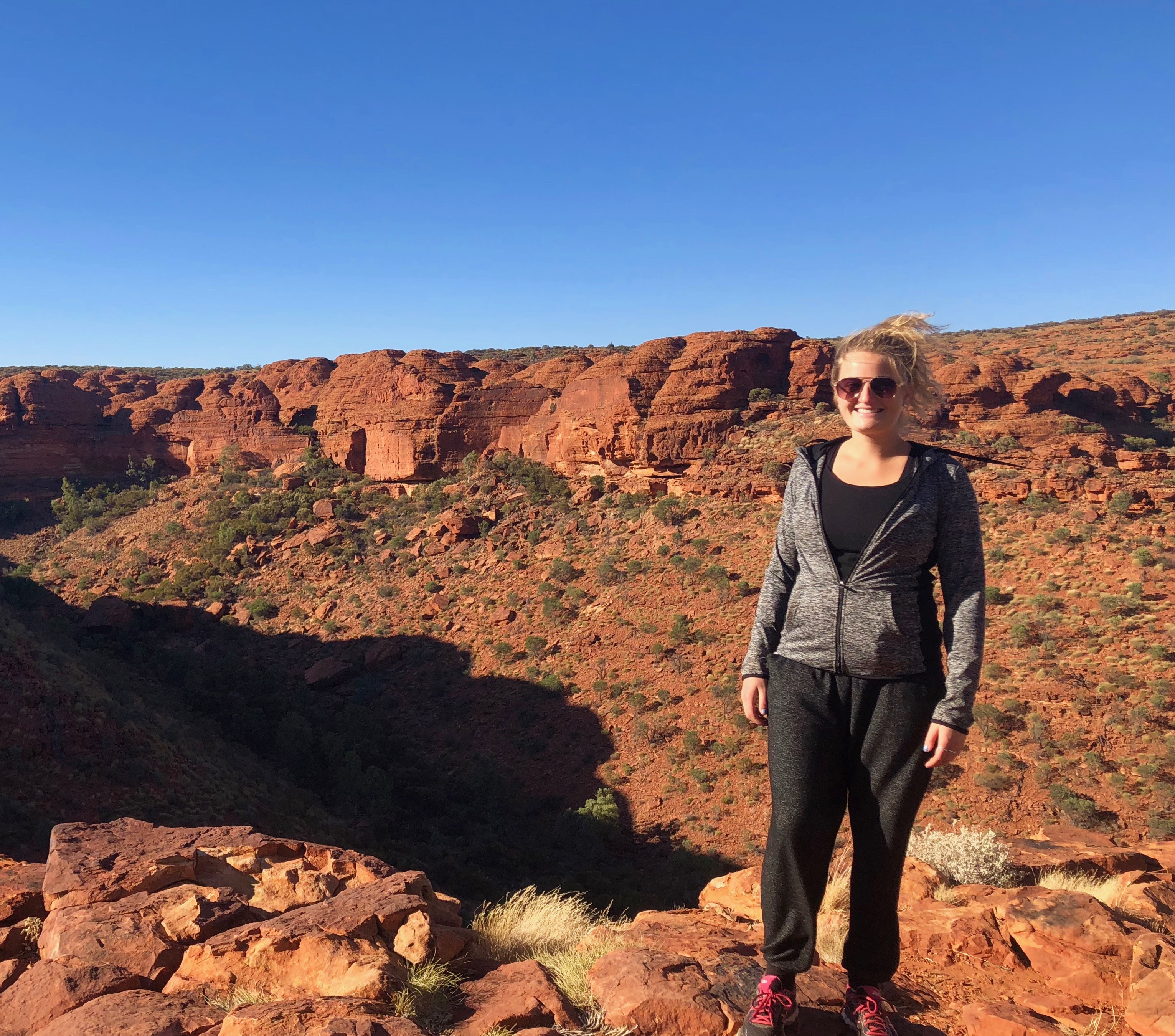 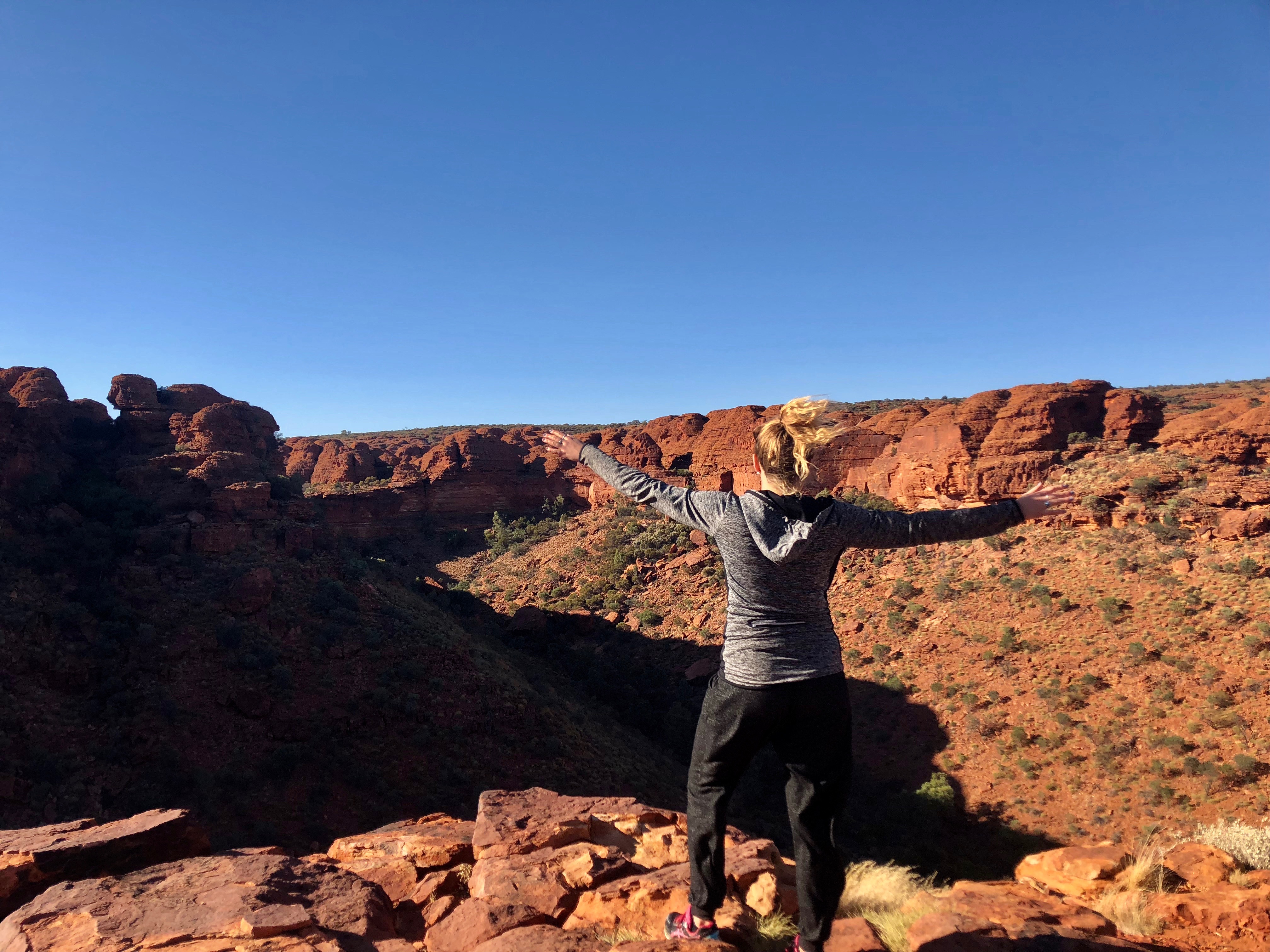 We completed our hike and descent out of the canyon, packed up the bus and headed back to the campsite, to pack up and eat lunch together for the last time. Every meal we had during the trip was great, I was pleasantly surprised at thoughtfulness and planning that was put into the menu for the entire 3-days. And, I got to try a camel burger and kangaroo meat, two interesting culinary endeavors that were new to me!

And the final stop on tour, once we were back in the city limits of Alice, was to take a picture with the iconic sign, a rite of passage to prove you’ve visited. So there you are everyone, cold-hard evidence that I have been to Alice Springs and the mighty outback of Australia. I believe we all returned to Alice in the same bodies, but not with the exact same spirits. Learning the stories of the aboriginals and the outback changed our perspectives and outlooks, even if just a little bit. 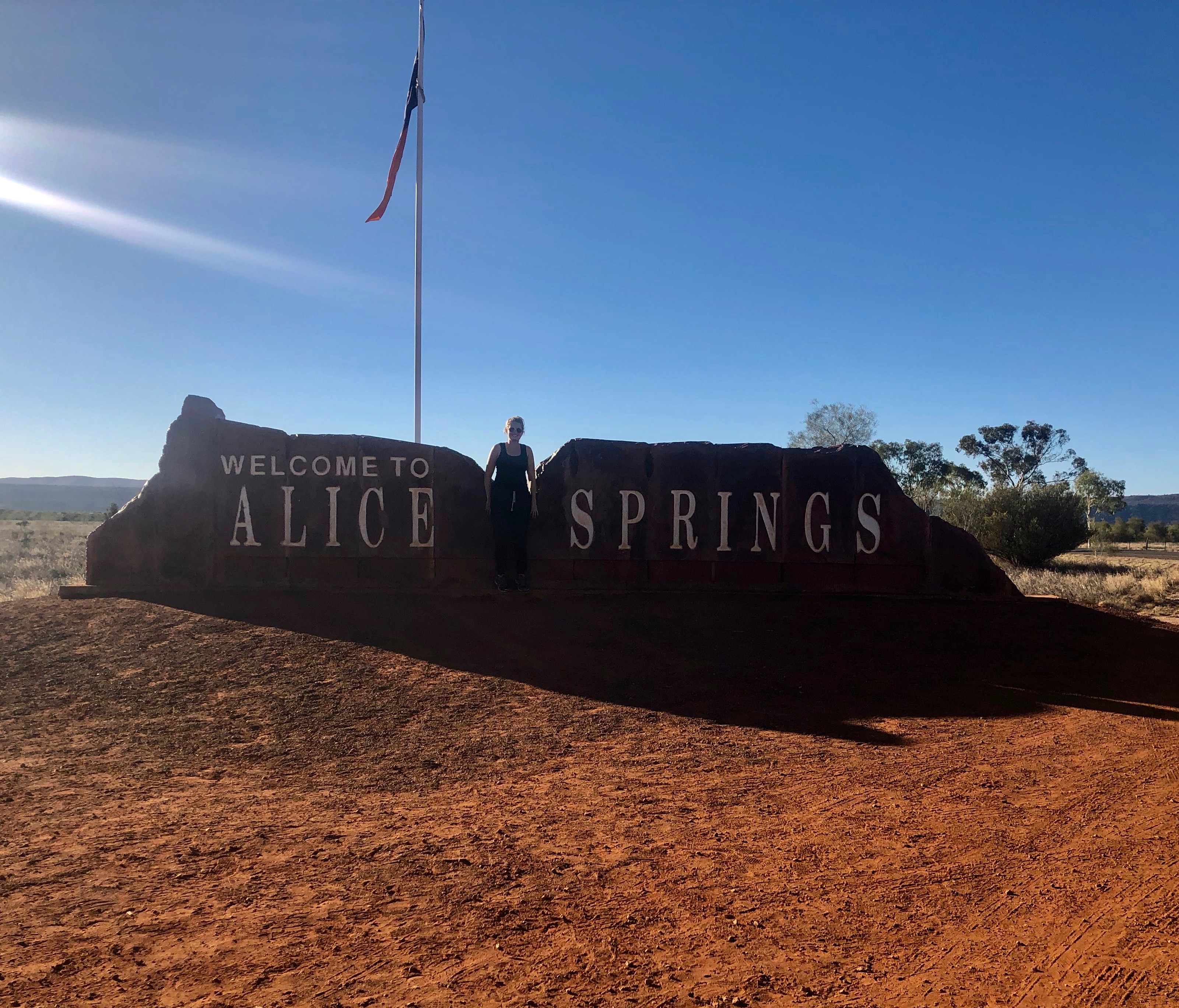