After going from the urban metropolis of Melbourne to the middle of the red outback in Alice Springs, I was ready to get a taste of the rainforest. It was time to fly to Cairns. A quick 2.5-hour journey would take me from the middle of the country to the Queensland coast. The humidity and warmth hit me the moment I stepped off the plane, and it felt so good. The same feeling that every Minnesotan gets when they get off the plane in their Spring Break destination after enduring months of frigid cold and snow. I went from having stick straight, flat hair, to a full frizzy, voluminous shrub atop my head.

I was happy that I’d be reunited with some of my Melbourne friends, some comrades to go on tours and explore Cairns and the surrounding area with. The main draw of tourists to Cairns City isn’t necessarily the city itself – the city is very small, and mostly a hub for bars and clubs to appease young backpackers. The real attractions are the surrounding day trips – and we opted to take a waterfall tour of the Atherton Tablelands with Uncle Brian’s Tours. 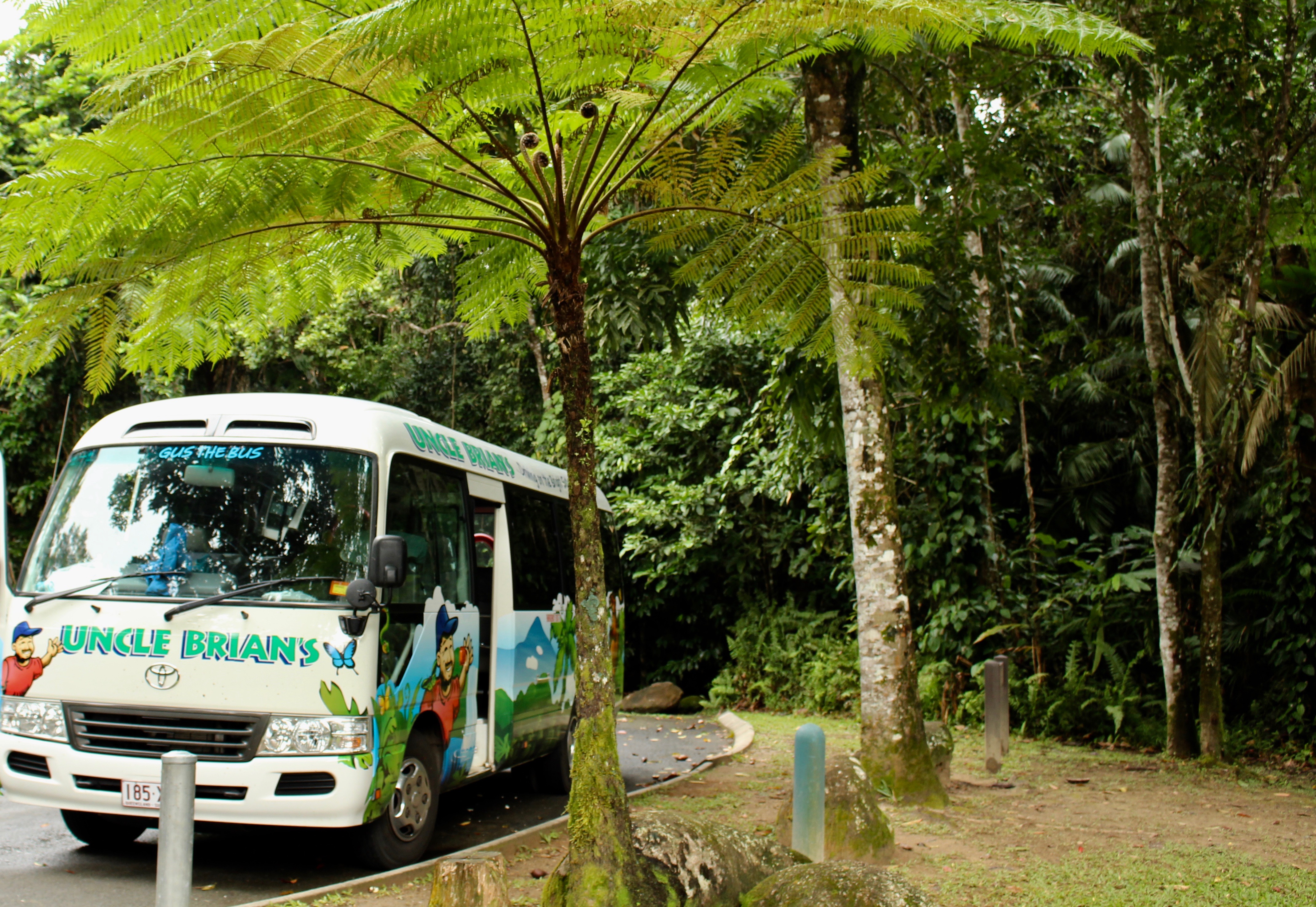 We were picked up early from the hostel and climbed aboard our adventure bus, which was going to take us to three different nature stops plus a lunch break. Our drive out of the city and north, into the rainforest, was spectacular. I had never seen a rolling mountainous landscape so lush in my entire life. The thick trees seemed to grow together, as one woven plant, covering the mountains like green cobwebs. 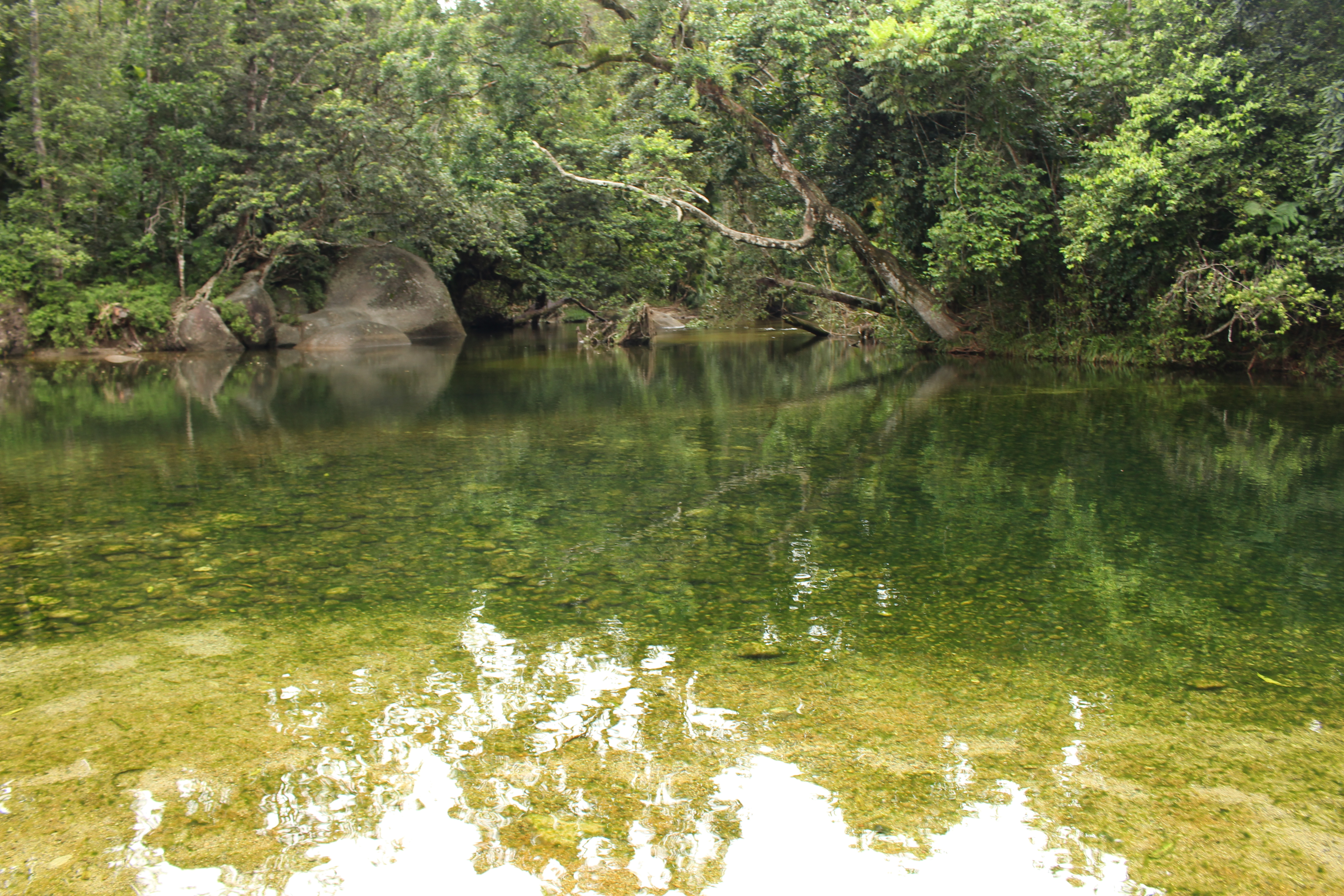 Our first stop, after about an hour or so of driving, consisted of a coffee break with snacks and a guided forest walk at Babinda Boulders, a pretty swimming stop. Our guide was great – he was a local Queenslander with lots of stories, and a true passion for the nature of this part of the country. There are lots of dangerous animals and plants, we quickly found out, in Australia, and he taught us a bit about how to identify them. The one that surprised me the most was the “stinging tree,” Dendrocnide moroides, a shrub that if you touch it, it will deliver a neurotoxin so potent that some people have been known to commit suicide from the pain. Not something to be messed with! I genuinely did not believe our guide when he was talking about it, but upon looking it up later, I learned it was not a myth! 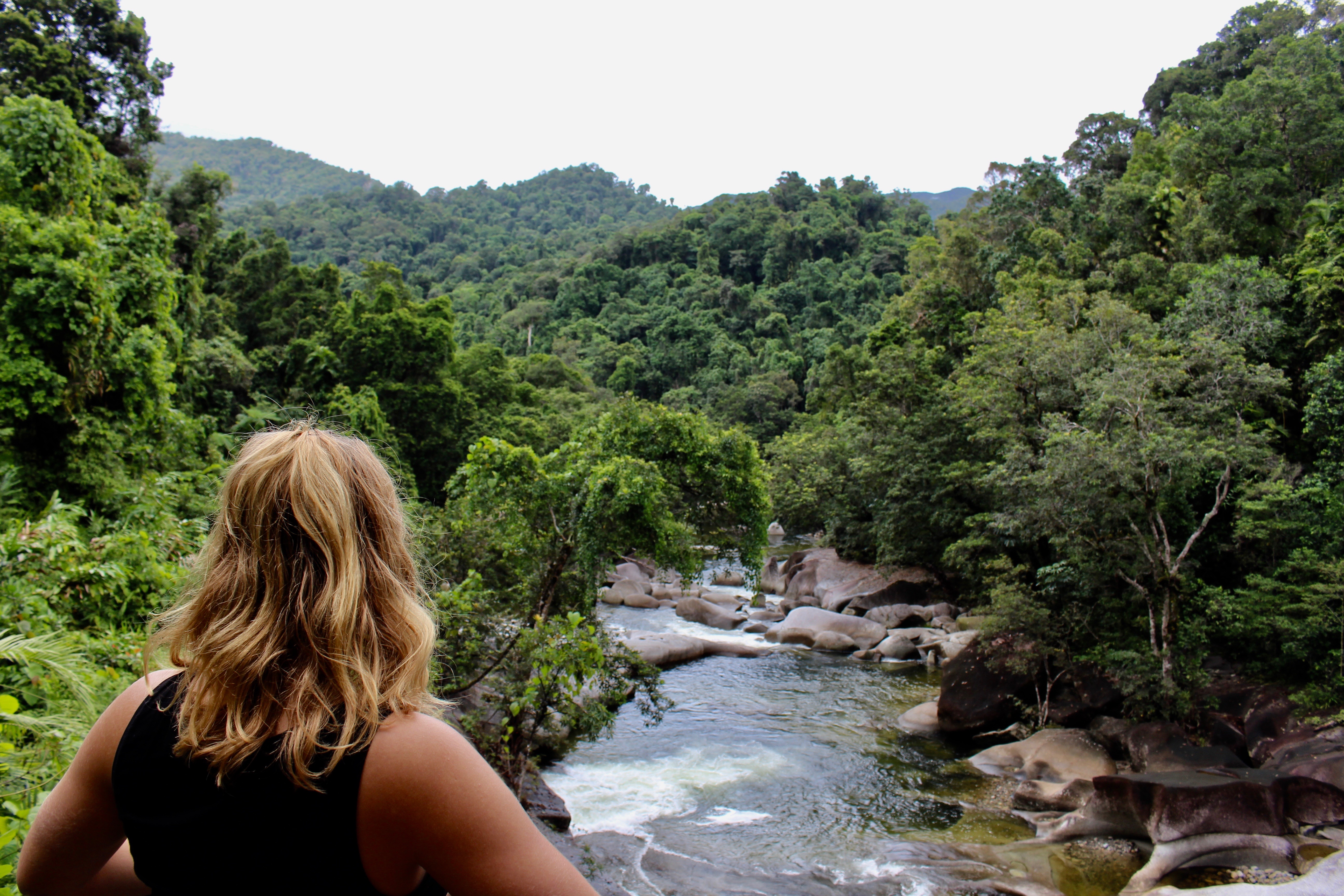 The next stop on the tour was Josephine Falls, a beautiful natural waterslide and swimming hole in the middle of the rainforest. It was a slippery climb and the water was really cold, but it was well worth it for the experience! 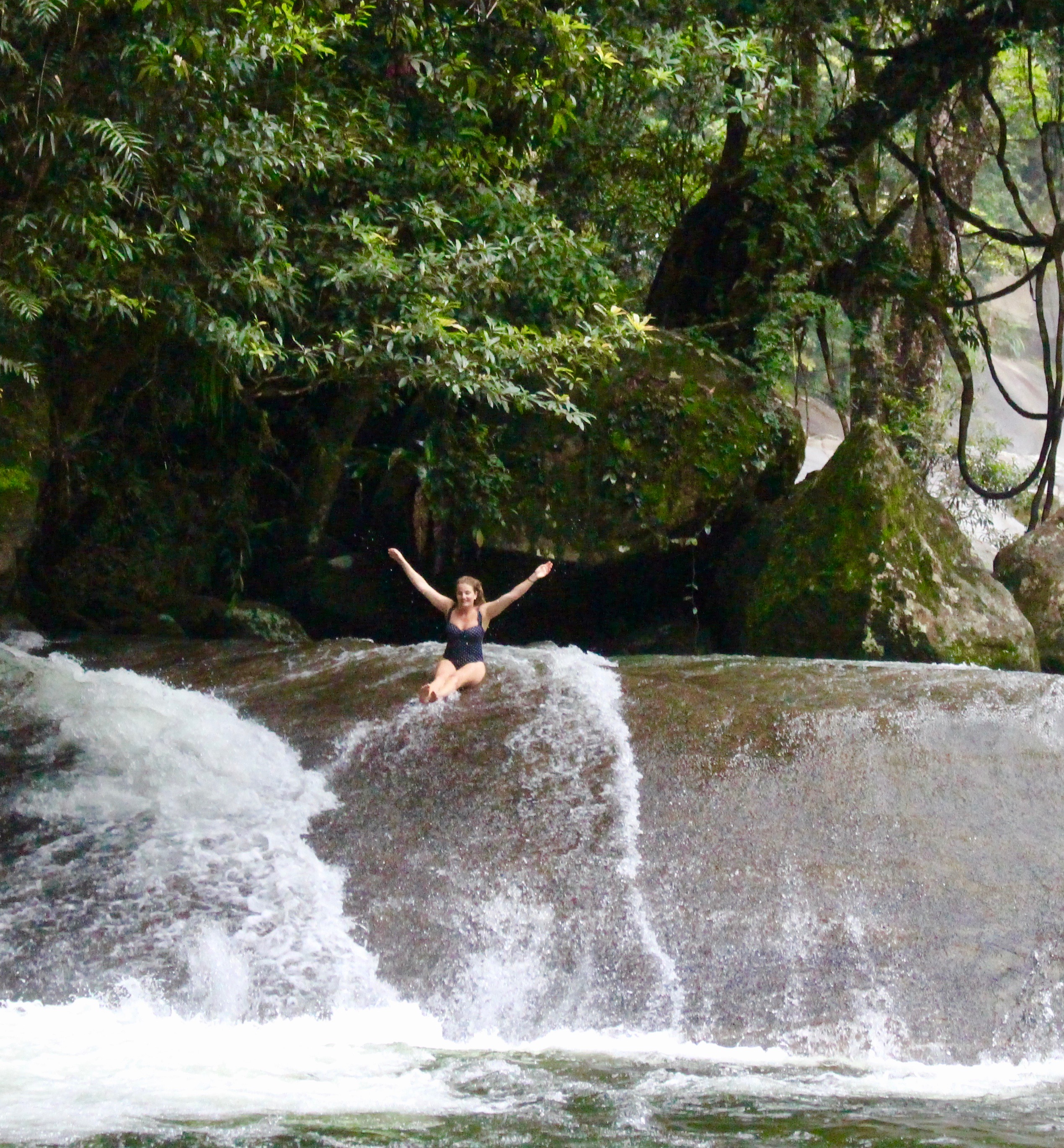 After a drying off from our swim and a brief walk back through the forest, it was back on the bus to head to the next stop – Millaa-Millaa Falls. The place famous for being the apparent location of the filming of an Herbal Essences commercial, with the iconic hair flip that everyone tries desperately to recreate. The waterfall was stunning, and it was hilarious to watch people flip their hair in and out of the water over and over again. I didn’t jump in for a swim or attempt to get a hair-flip picture, but my friend Sarah captured this gem. 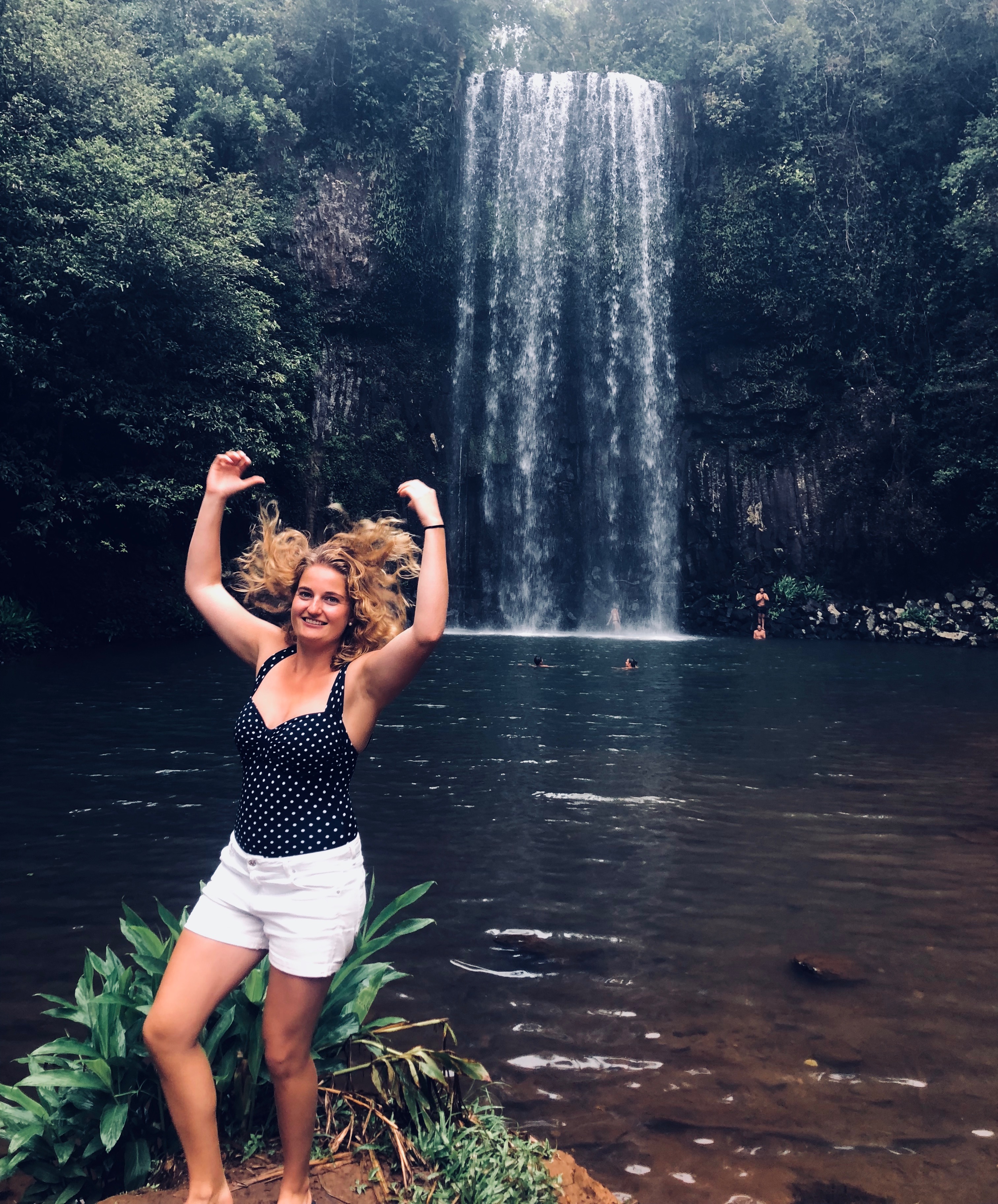 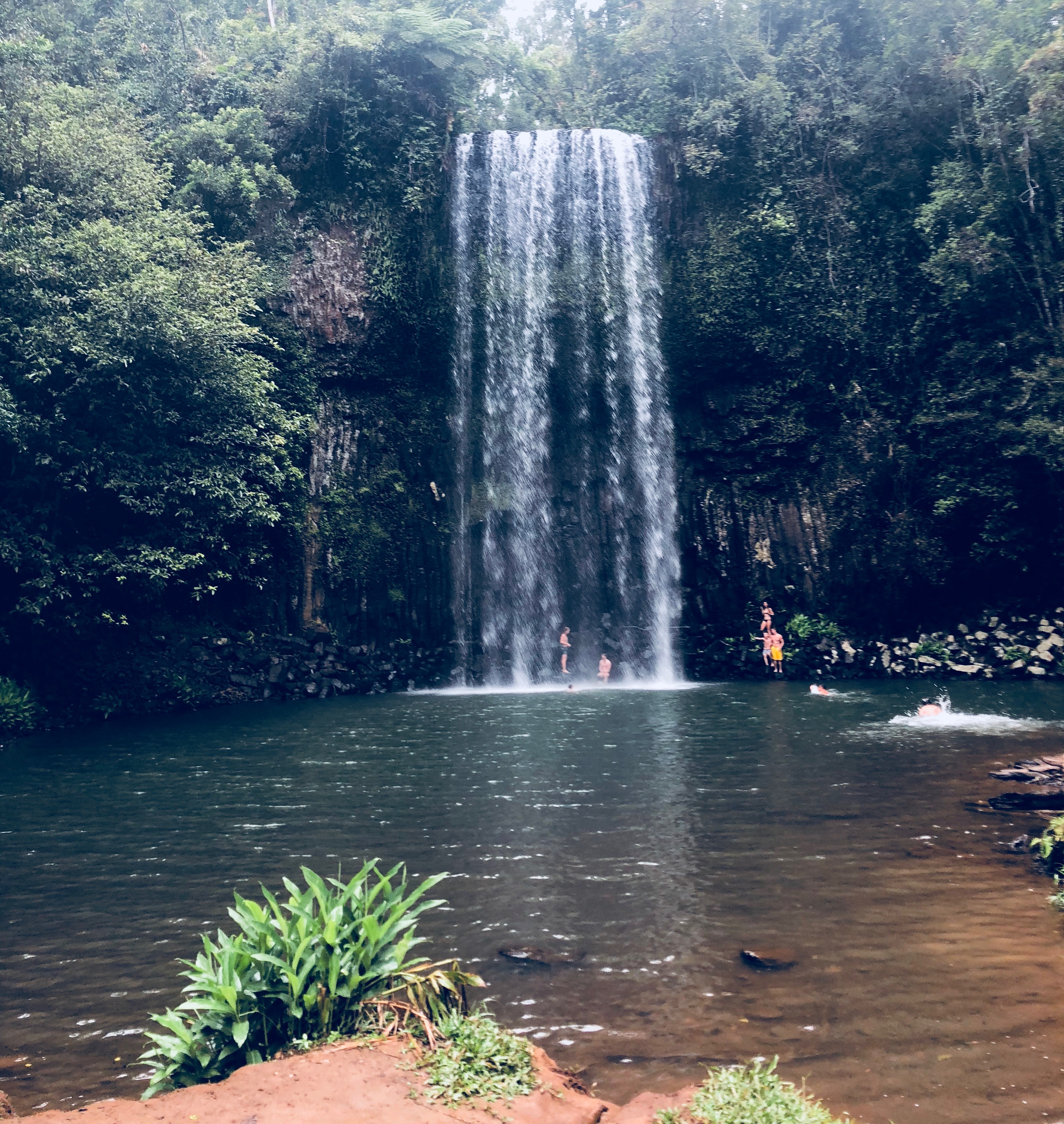 After Millaa Millaa, we drove to a Tea House in the mountains for lunch. It was a charming restaurant, a farmhouse style place with cows roaming in a pasture out back. It was a great place for a break before the last stop of the day, Lake Eacham. This freshwater lake has one resident alligator, and while it’s deemed safe to swim, I was not about to take my chances! It was a beautiful spot though, another great natural place to enjoy on a trip outside of Cairns City. 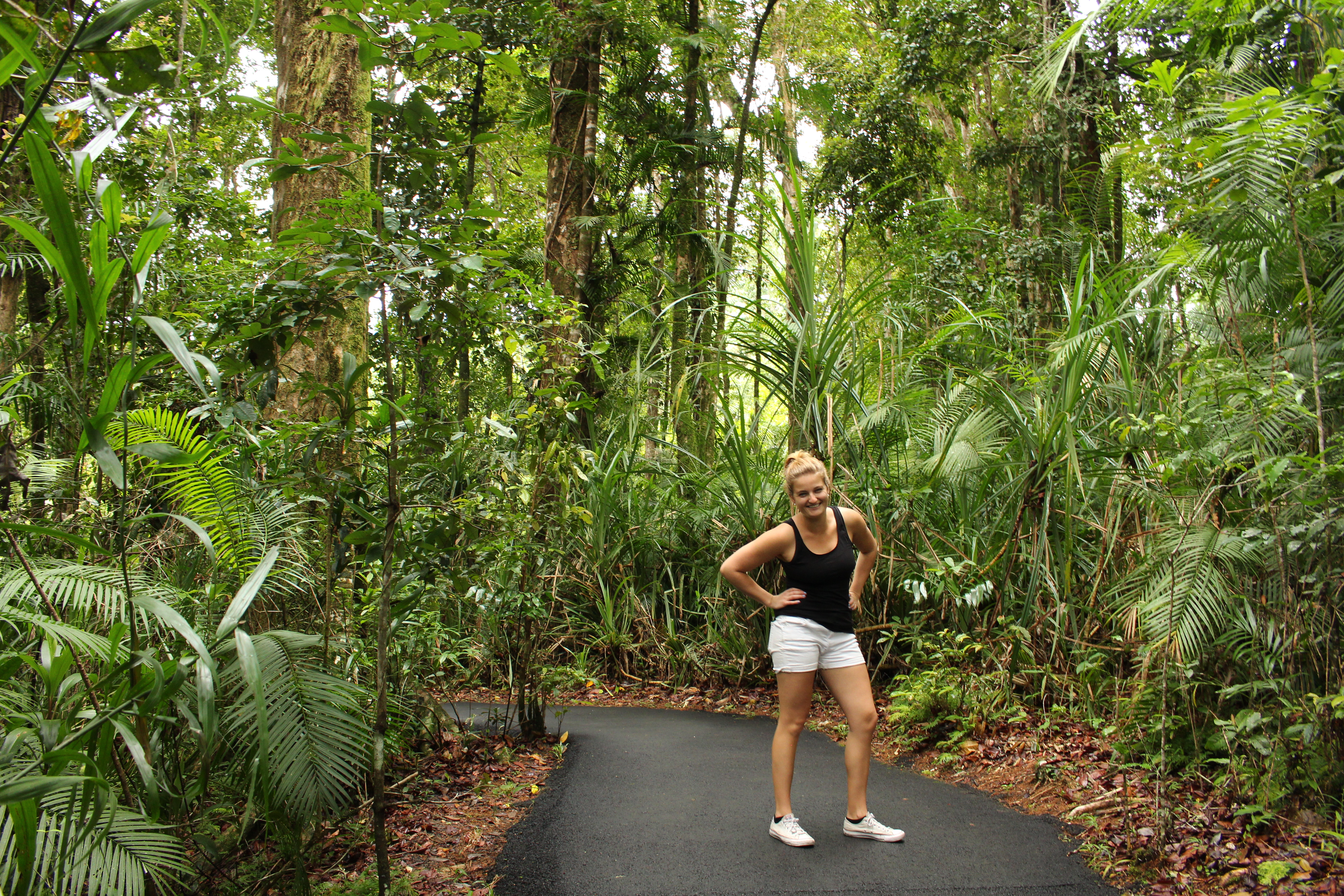 The tour was several hours of driving in total, but the stunning beauty of the surroundings made it a pleasant journey. Sometimes, group tours can be hit or miss. You can have a mediocre or uninspiring guide, lame people in your group, or it can be disorganized and dysfunctional. Thankfully, that wasn’t the case at all, and my experience is why I’d recommend opting for Uncle Brian’s instead of trying to organize a day on your own. Our travel crew was a friendly and fun bunch, I learned a lot from our guide, and having all the transport and little details planned and executed seamlessly made it the perfect day. 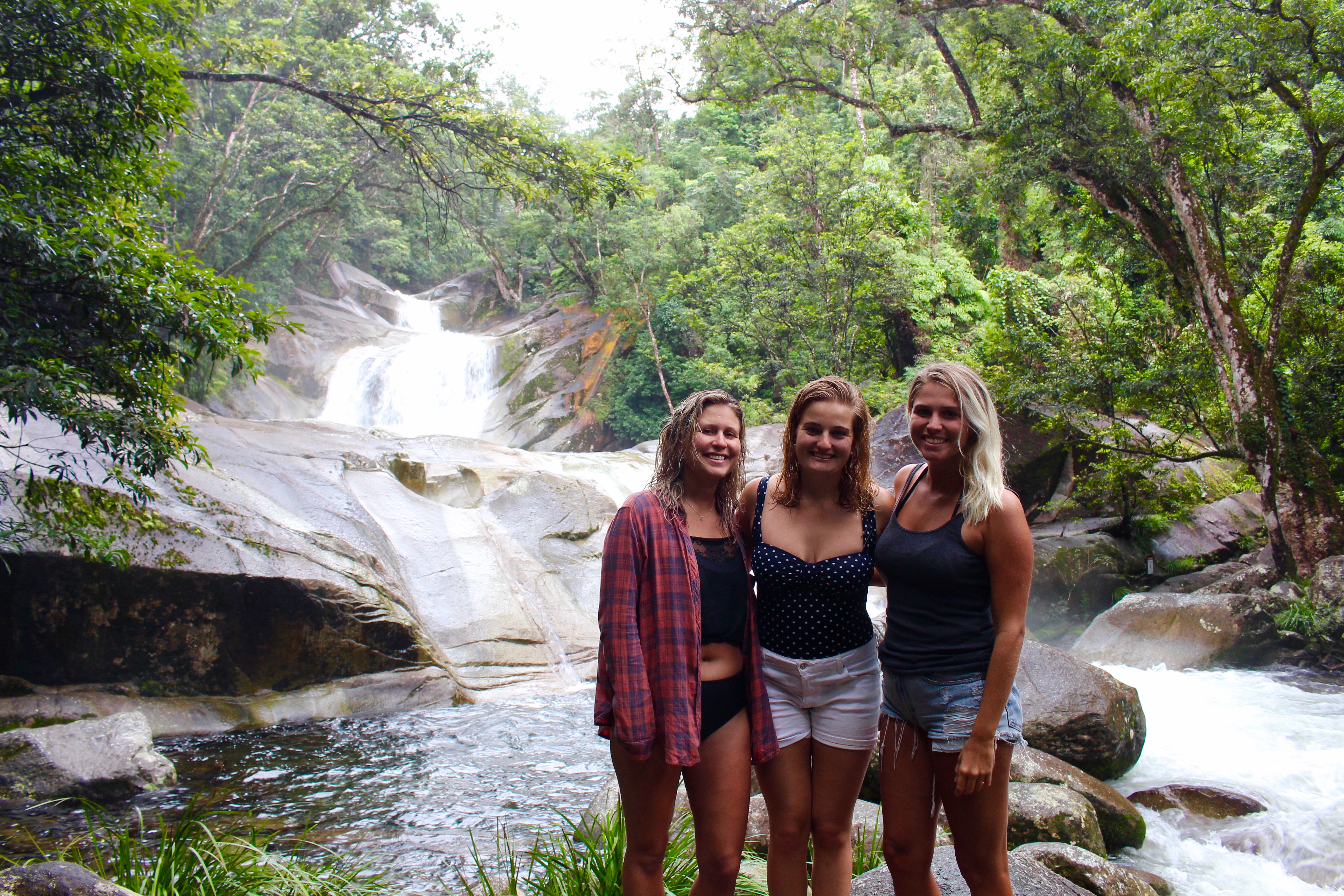