After leaving sunny, tropical Cairns, I flew across the country to Perth, to the complete opposite side of Australia. While I had grown to love Cairns, the friendly people at Calypso Inn Hostel, and the weather, I felt that with the change of the month from May to June, it was time to change my surroundings. I saw how Cairns is a city that can suck people in and keep them there. The quaint feel of the entire town combined with the fun party atmosphere, and warm, tropical weather all make for inviting reasons to stay. But I didn’t want to get stuck. There’s too much of Australia to explore.

I landed in Perth and was quickly hit with a blast of cold weather. Ok, so not “cold” by the standards I’ve endured through two decades of Minnesota winters, but it was still a shock to the system. Time to put the shorts and sleeveless tops at the bottom of my suitcase and pull together whatever warm clothing I had to make a months worth of outfits out of.

As the sun was nowhere to be seen and the rain poured down for an entire week straight, I impulsively decided to grab a flight up north to Broome, a small city in Western Australia known for hot sunshine, unbelievable sunsets, and its history as a pearling town. I packed a small backpack with summer clothes and sunscreen, checked out of Perth and jumped on a 2-hour flight to transport myself to summertime. 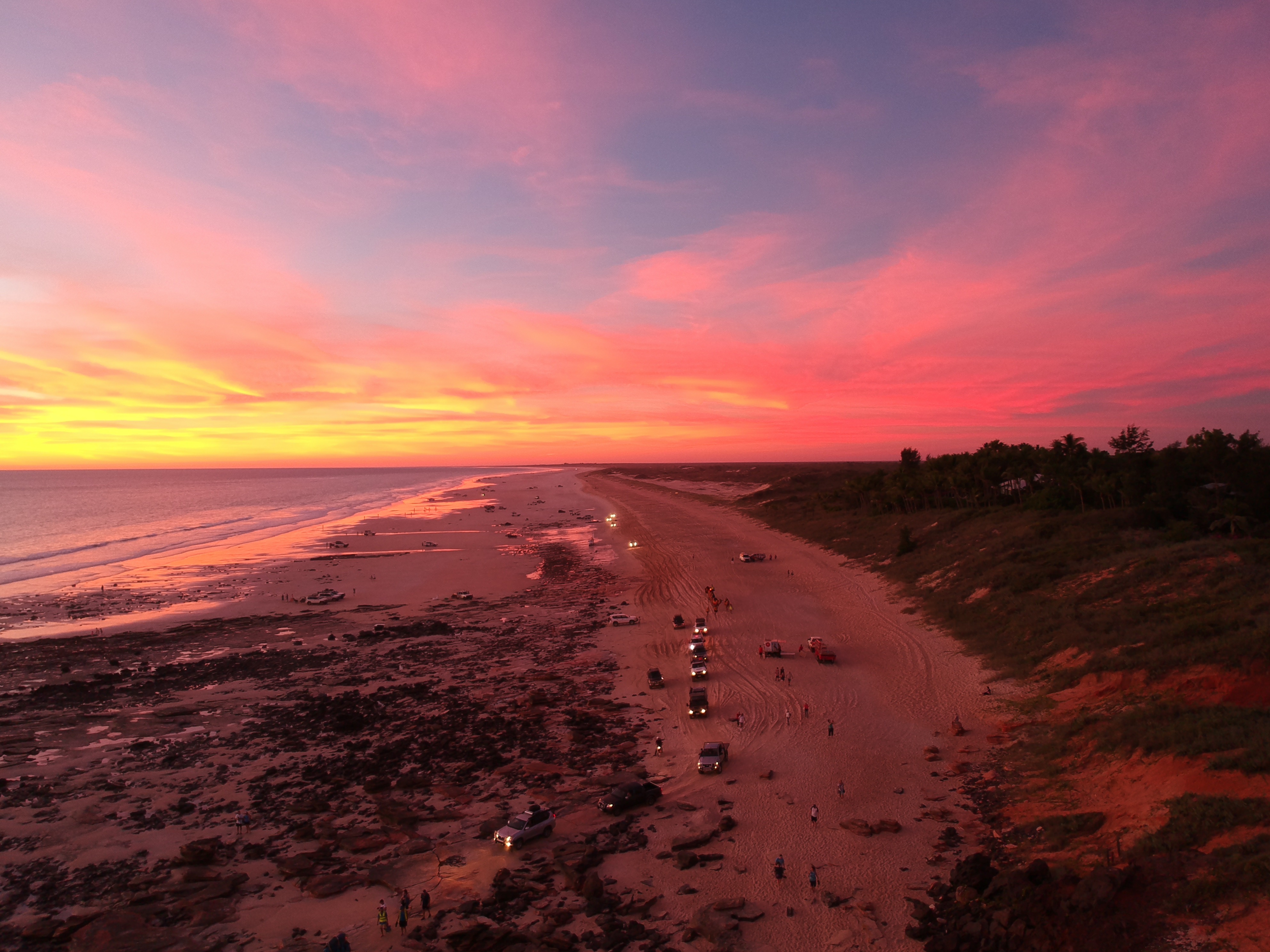 Broome is an expensive city to visit. A lot of goods need to be imported long distances, which drives up the price of basic necessities. I found the grocery store prices to be similar to the big cities in Australia, but restaurants and accommodation were much more expensive. I stayed at Kimberly Travellers Lodge, a modest hostel run by a tour company. While it was an affordable option and easy to reach from the airport (a 7-minute walk, the first time in my life I’ve walked from an airport to my accommodation) it was expensive for what it was. There just aren’t many options in this small city, so you have to take what you can. It has a bar, a kitchen, and all the basics. 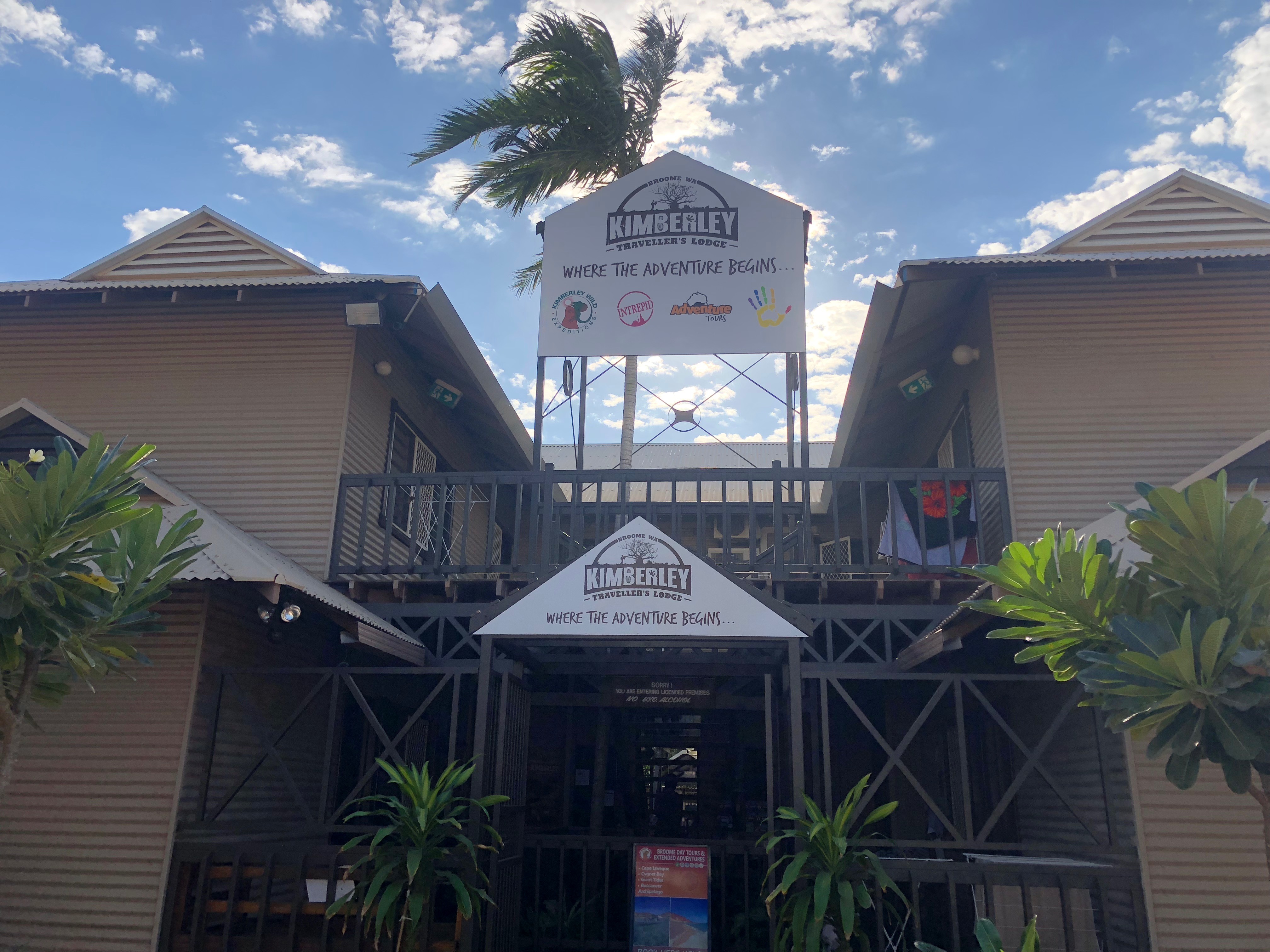 Broome attracts retired Australians from the southern cities of Adelaide, Melbourne, Sydney, and Perth who want to see more of their country and escape the rainy winters.  It’s also a stopping point for lots of people on their road trips around Australia, from Perth to Darwin on the west coast. The west coast is much more remote than the east coast of Australia, but many people who have completed the road trip on the west coast say it was their favorite part of their time in Australia. I really enjoyed my week here, even though I was working on my laptop most days, it was great to take a midday tanning break and have a swim in the pool.

Broome is not a city teeming with things to do, so it’s perfect if you’re looking to relax, develop a tan, or go on a tour. One of the things to do that you cannot miss if you’re in Broome is a sunset at Cable Beach. While this suggestion could evoke an eye roll, “yeah, but you can see a sunset anywhere” I have to say, it was the most stunning sunset I’ve ever seen in my entire life. At the advice of a woman who worked at the lodge, I went to watch it twice, since she insisted that it’s never the same and the colors are drastically different every night. She was right. One night the sky illuminated in pinks and purples that I’d never seen created by nature, and the second time the horizon glowed a brilliant orange as if a can of Fanta was being poured down from the heavens. 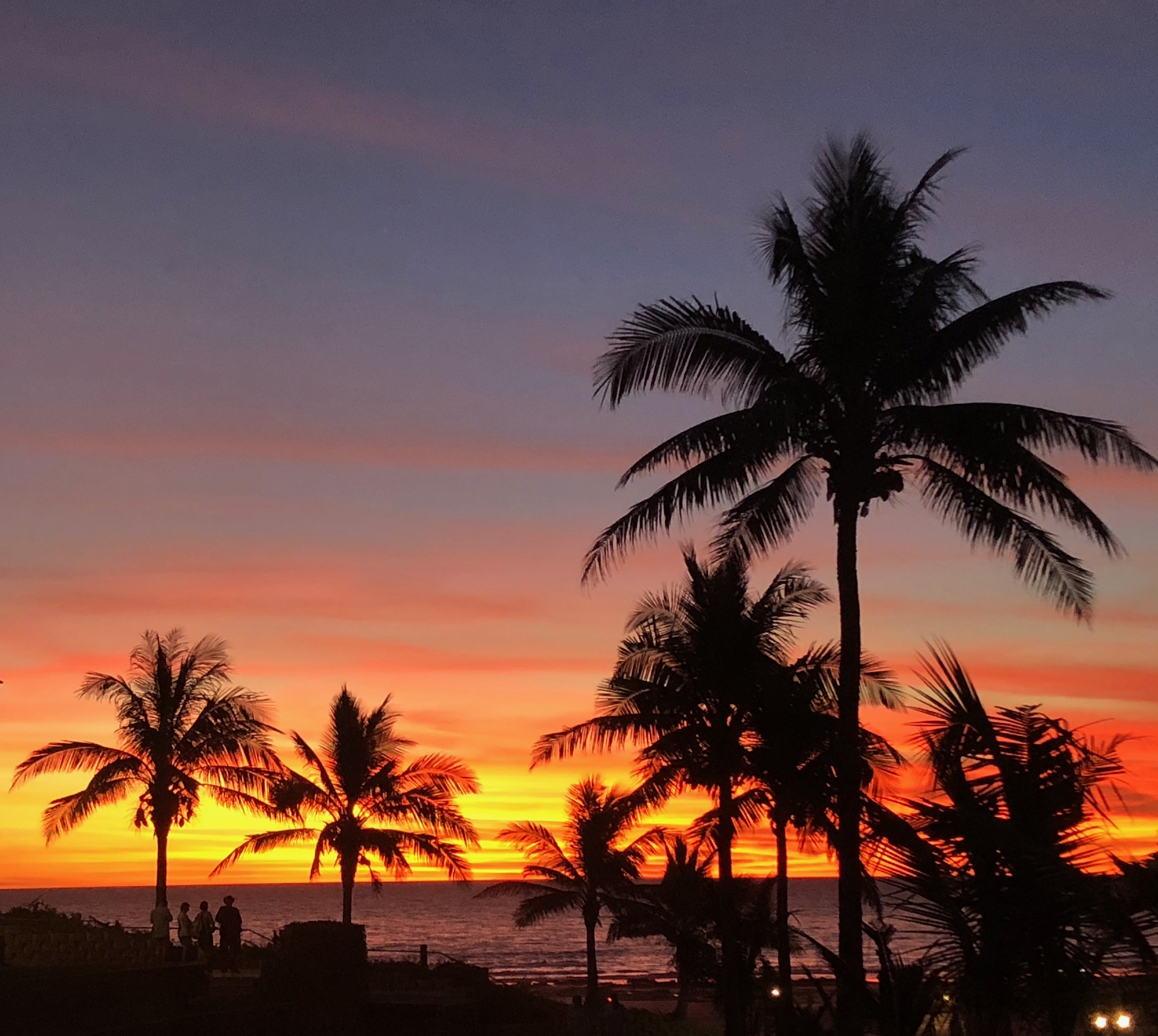 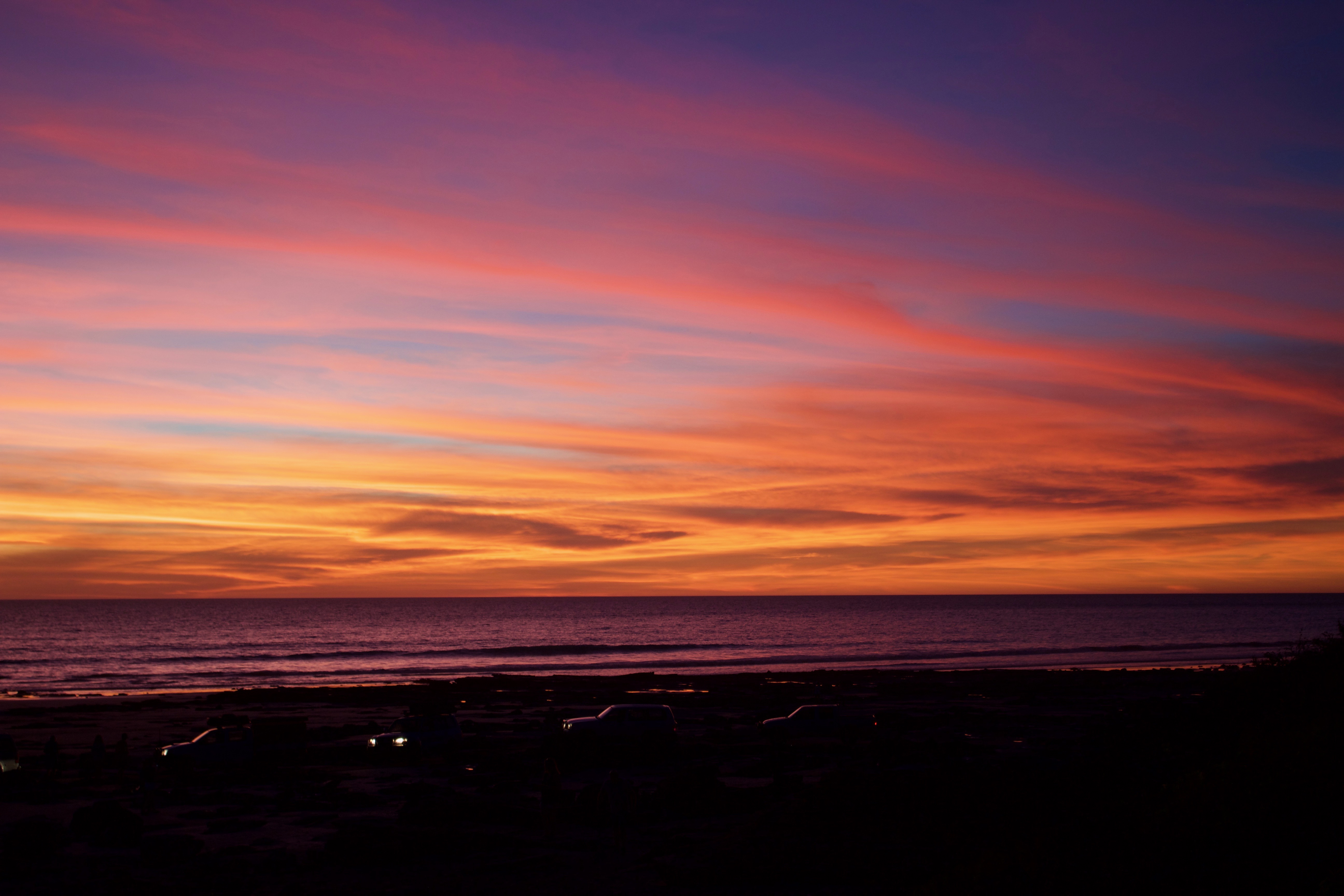 Australia has the largest feral camel population in the entire world, and the beasts are not native to the country. They were first brought over from Asia in the 1800s when workers relied on them for construction of railroads and other infrastructure. Once they were no longer needed, they were set free into the wild, with the assumption at the time being that they would die off in the extreme elements of the outback. Instead, the camels flourished and have become an invasive species in the outback. They are now mainly used for tourism or for their meat.

A tourist attraction to enjoy in Broome is a sunset camel ride on Cable Beach. While I did not take a camel ride myself, I read that all the ladies on the tours get an included pair of pearl earrings with their camel ride. It was a gorgeous setting to enjoy such an experience, and it looked like the tours catered to families with children too. 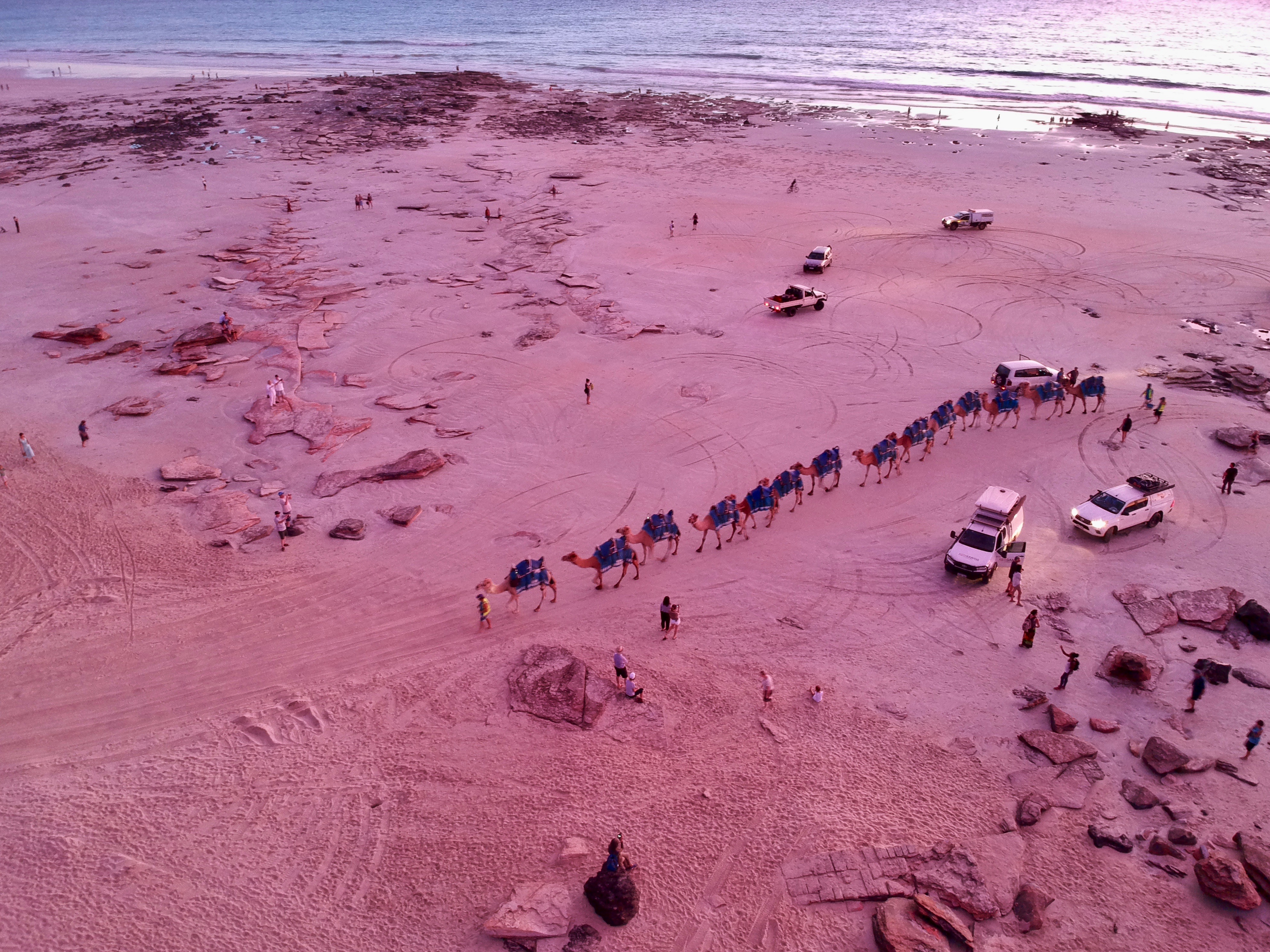 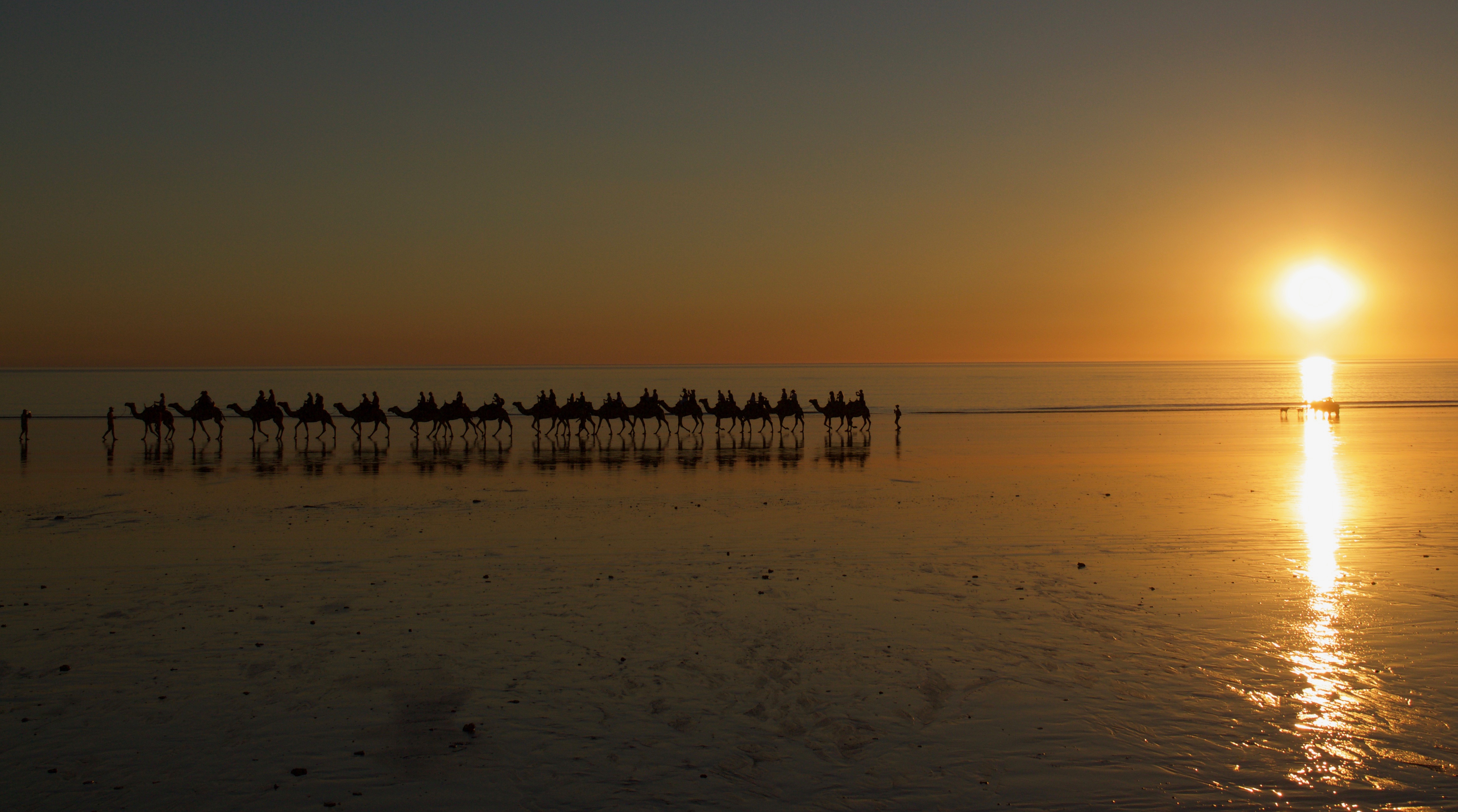 This is a stop I’d recommend during a stay in Broome. The Thursday Night Markets are on in Broome at the Town Beach Reserve every Thursday between June and September. There were lots of food stalls selling cuisine of various nationalities, as well as artisan crafts and other goods. The markets are an excellent place to buy aboriginal art too.

The history of Broome as a pearling town led to an influx of Asian immigrants to Broome, and their influence can be seen today in Chinatown with the architecture, and there are lots of Asian restaurants to try. I cooked most of the time at the hostel to save money, but one place I did go to for my morning coffee was The Good Cartel, a chic outdoor cafe near the lodge. 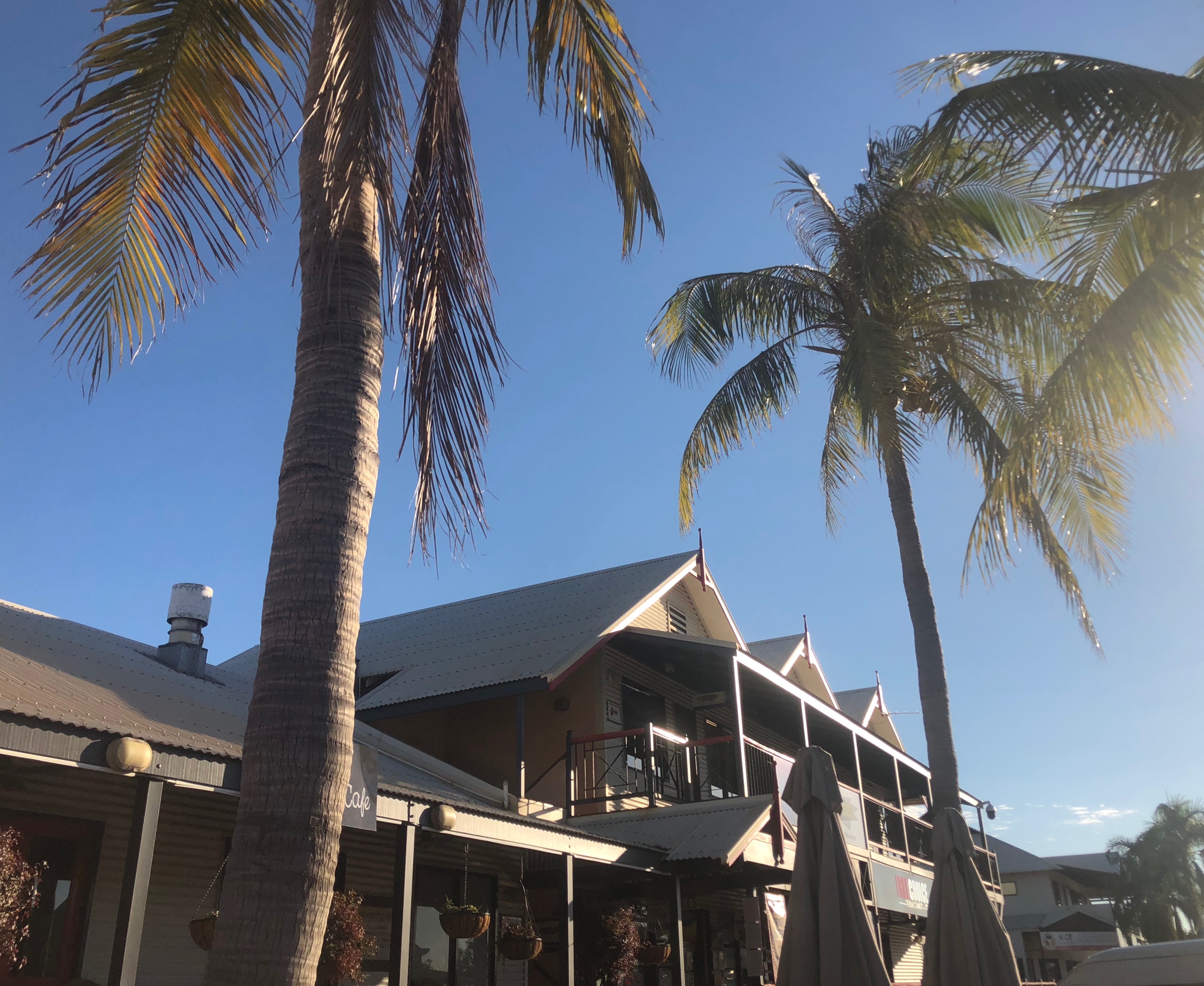 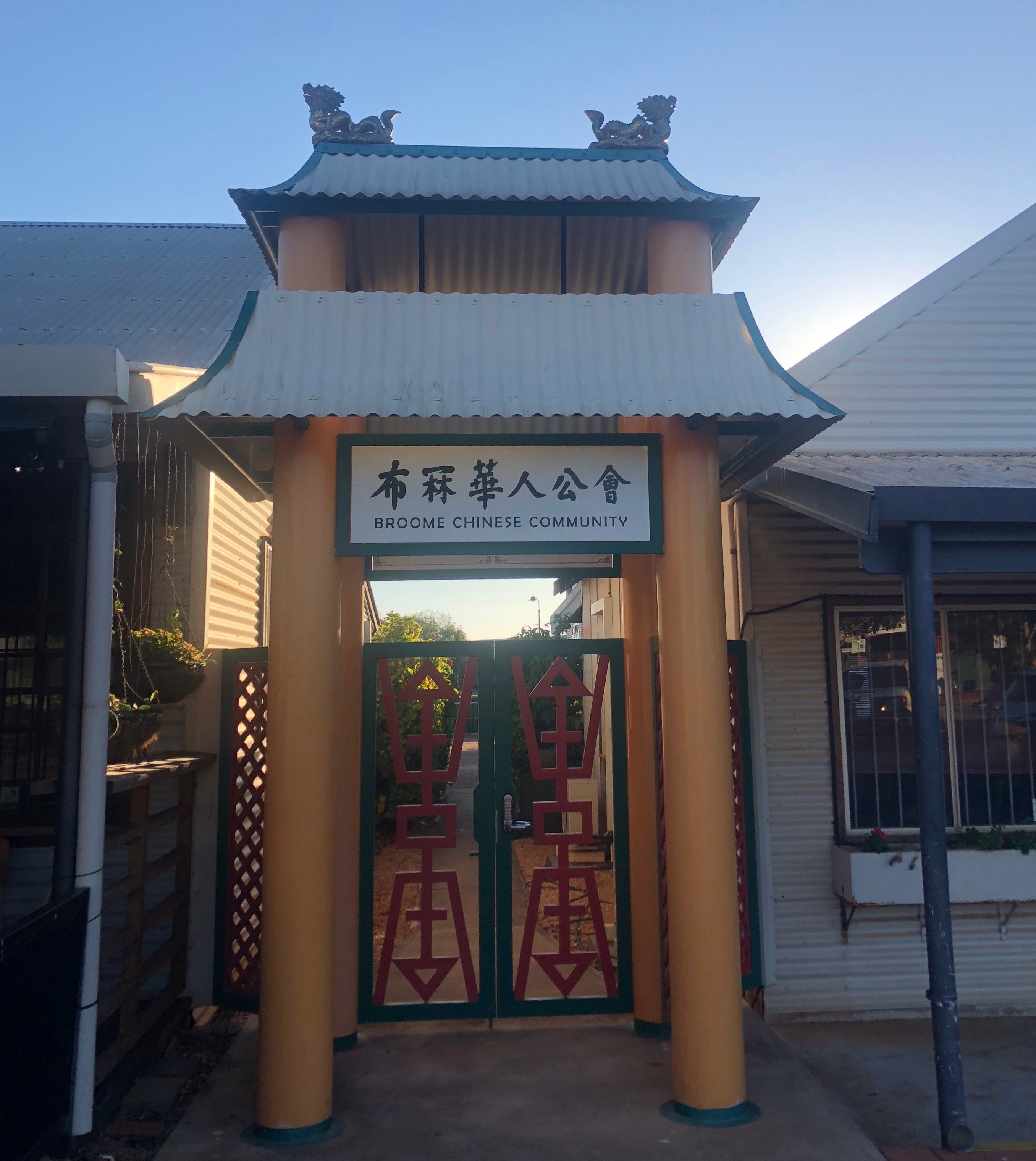 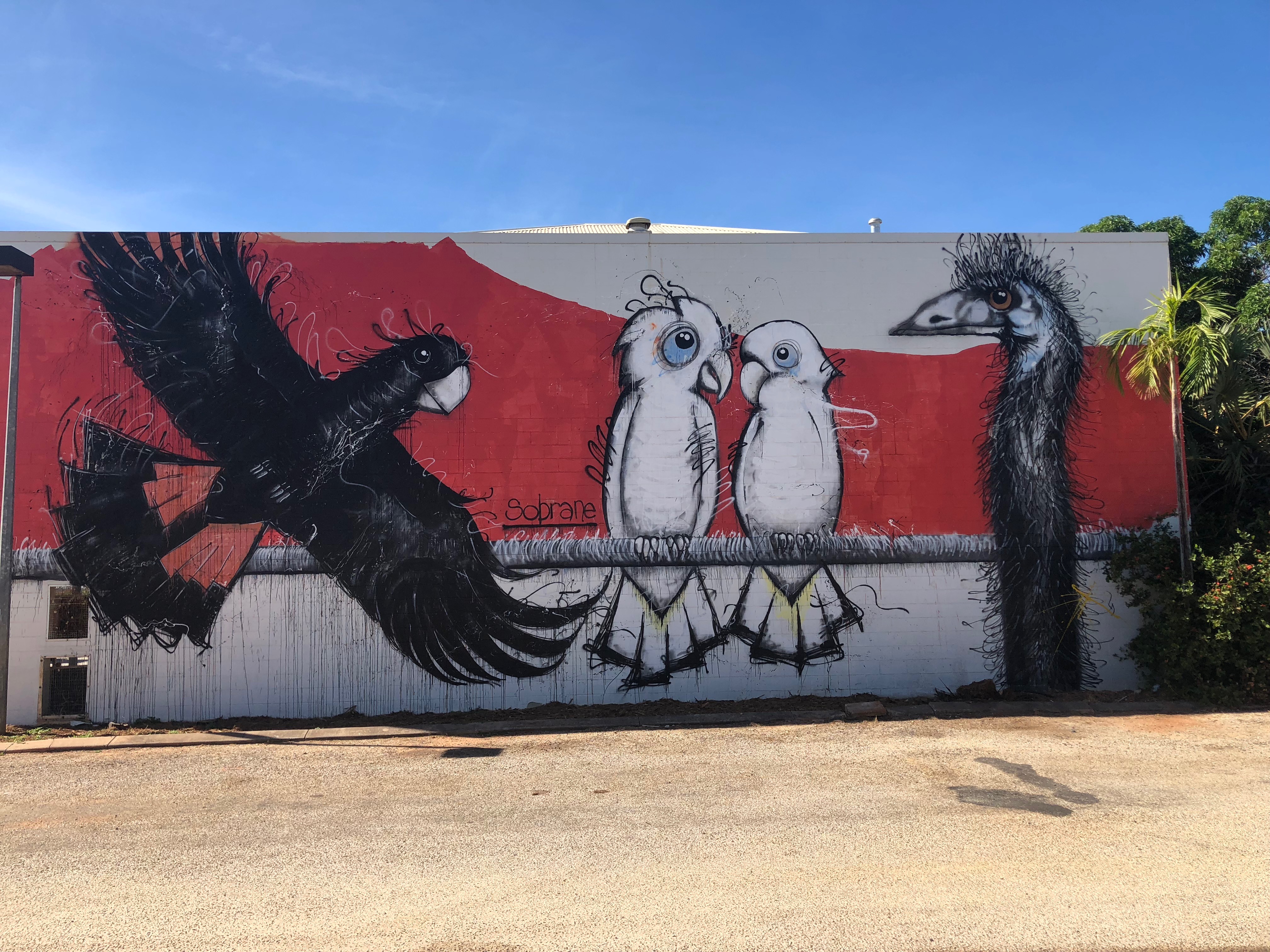 Broome, while not offering an endless list of things to do, was a beautiful escape from the rain and cloudy skies of Perth. The sun was shining every day, and the temperatures were hot with mild humidity. I wouldn’t fly to just Broome again for a second visit, but I hope to someday see it again during a road trip from Perth to Darwin. It would be a great place to go camping with a group of friends during a big Australian adventure, to see the sunsets and disconnect a bit from the bigger cities and a faster-paced life. 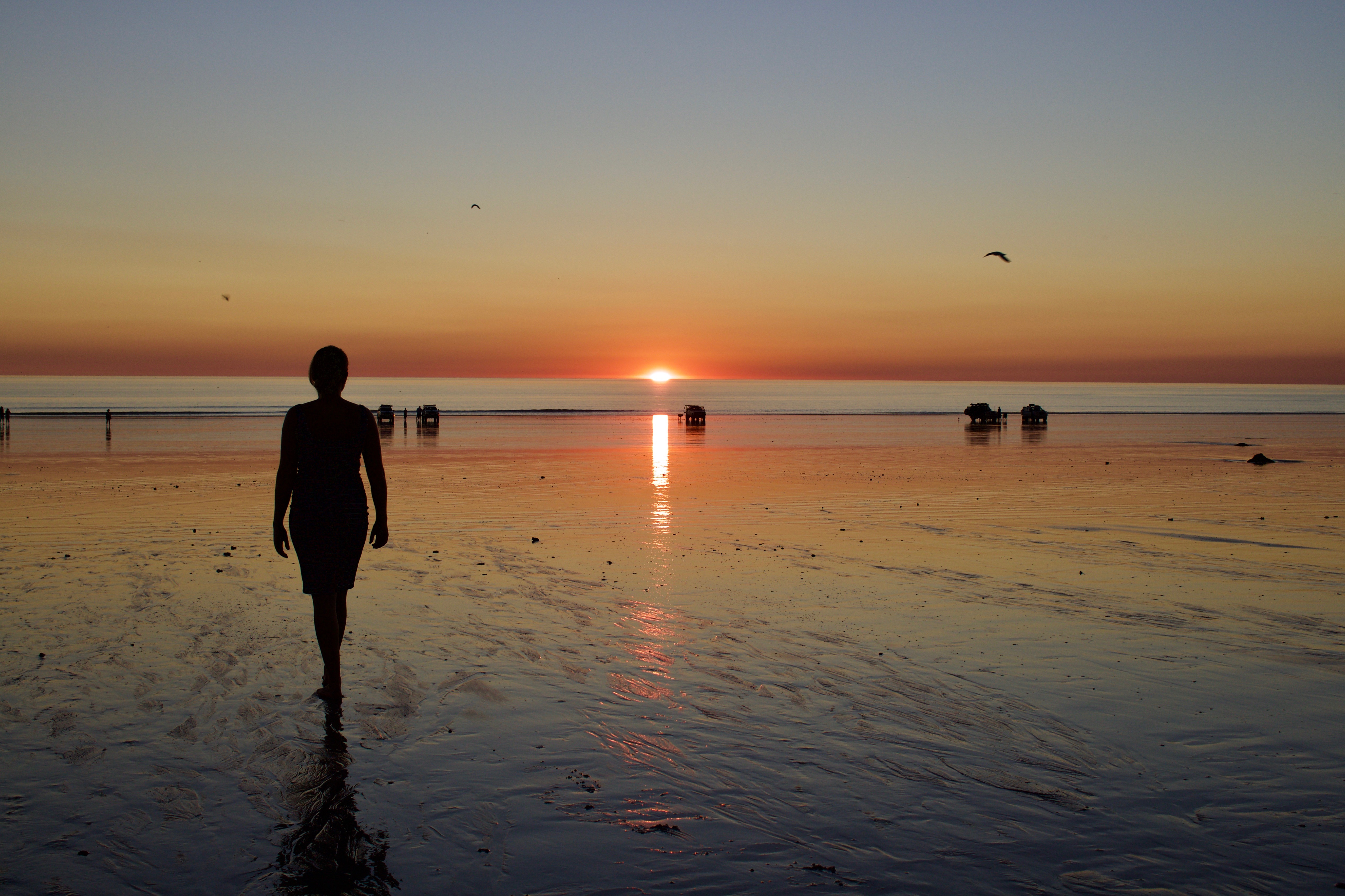