Lima, Peru was the first city I’ve visited in South America. After a brief stint in Mexico City, it was time to board a 5-hour LATAM flight to Lima, making my way into Peru and South America for the first time. I was excited but also nervous. Even though I speak Spanish confidently, and I knew Lima was a cosmopolitan, developed city, I still had no idea what I was about to get myself into.

Lima: What to Expect

Things to know: You CAN’T drink the tap water ANYWHERE in Peru. Don’t let Lima fool you, even though some areas seem just as developed as any city in the United States, the tap water is not safe to drink. Bottled water is cheap, but if you hate the plastic waste, consider investing in a bottle filter like LifeStraw or a Steripen. I am definitely going to buy one for future travels since nothing is more depressing than paying for water in plastic bottles in a country with little to no recycling infrastructure.

While most of the tourist areas are pretty safe, petty crime and theft is definitely alive and well in Lima. If you stick to the main areas, you should be okay. We did walk through one local’s market that was very intense – the crowds felt like they could get out of control or would be the perfect opportunity for a pickpocket. Be wary at night and stick to the popular areas and you should be just fine.

Use Uber! It’s cheaper than most quoted taxi prices and prevents the drama incurred when trying to haggle with taxi drivers who try to rip you off for being a tourist.

This is undoubtedly the best neighborhood to stay in if you’re visiting Lima. Nestled along the coast with a variety of nice apartments, good restaurants, and tons of bars and things to do. It’s a safe area of Lima and there are always people out and about. It’s also beautiful – staying true to its name by having lots of gardens of flowers all throughout the area. 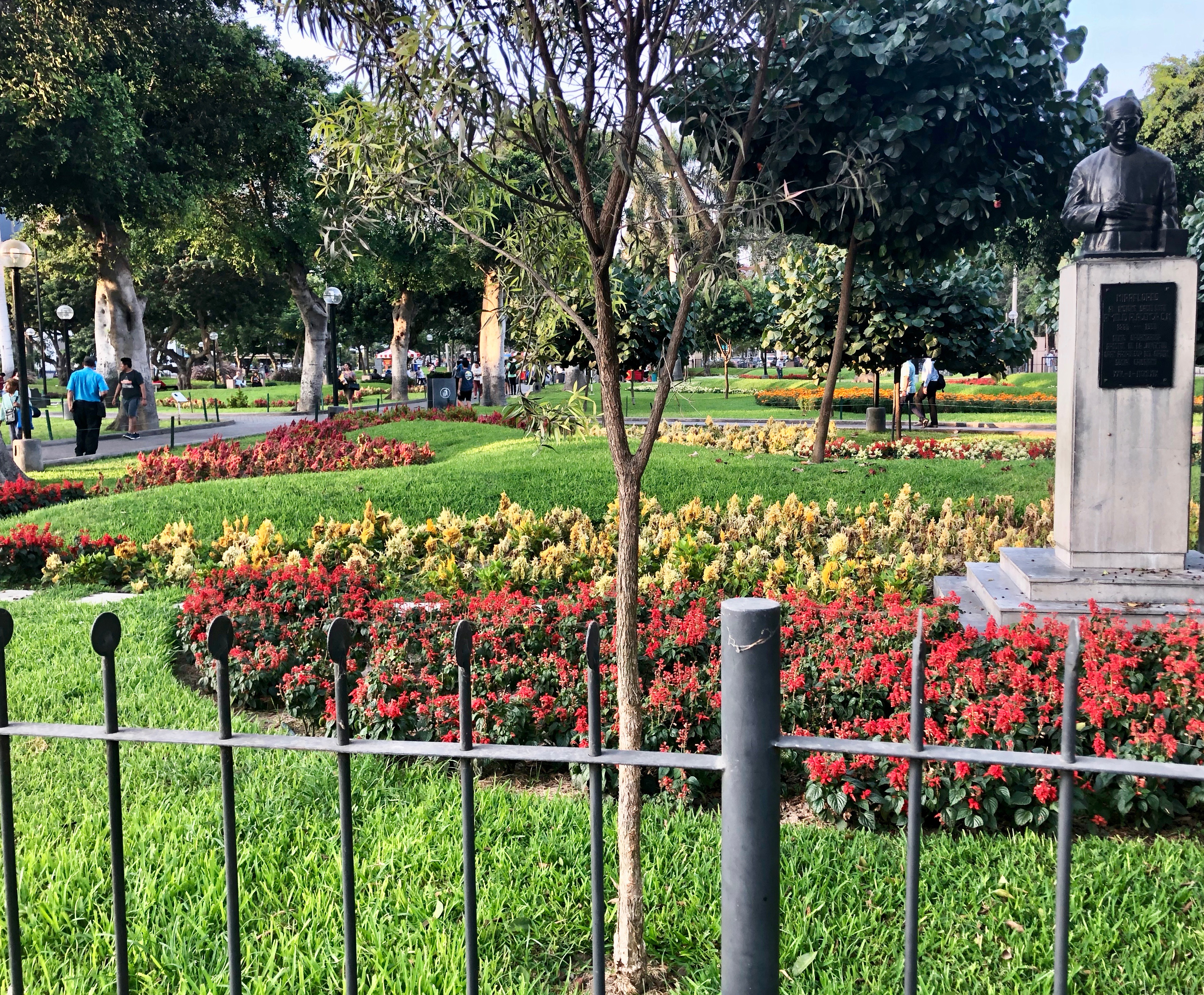 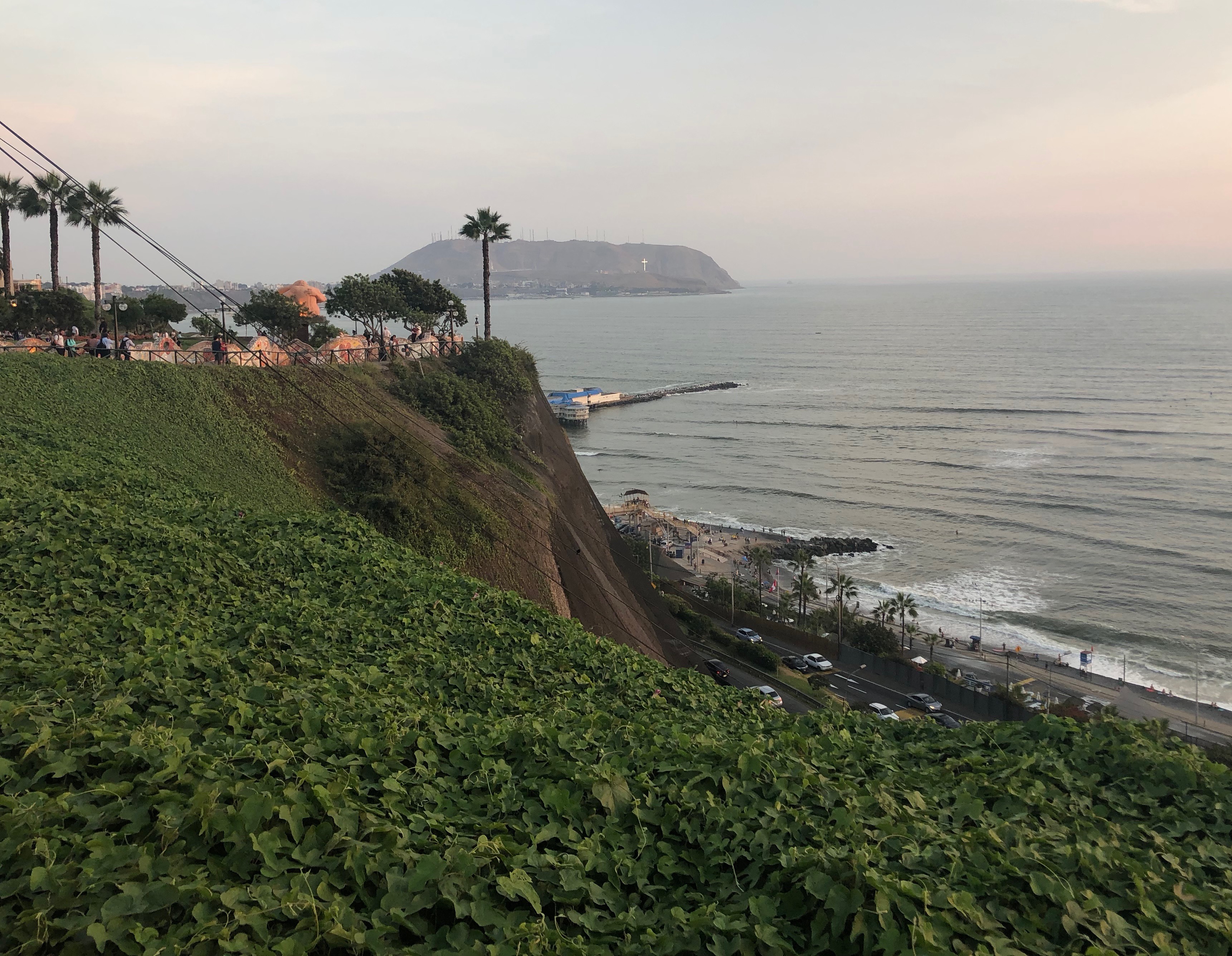 This was a lovely experience at a park in the middle of the city. Every night, at several different hours, there is a light show on the water spray of the fountains in Parque de la Reserva. There are food and drink vendors throughout the park, so you can get some local fare and enjoy the show. It was a cheap and enjoyable thing to see while in Lima. 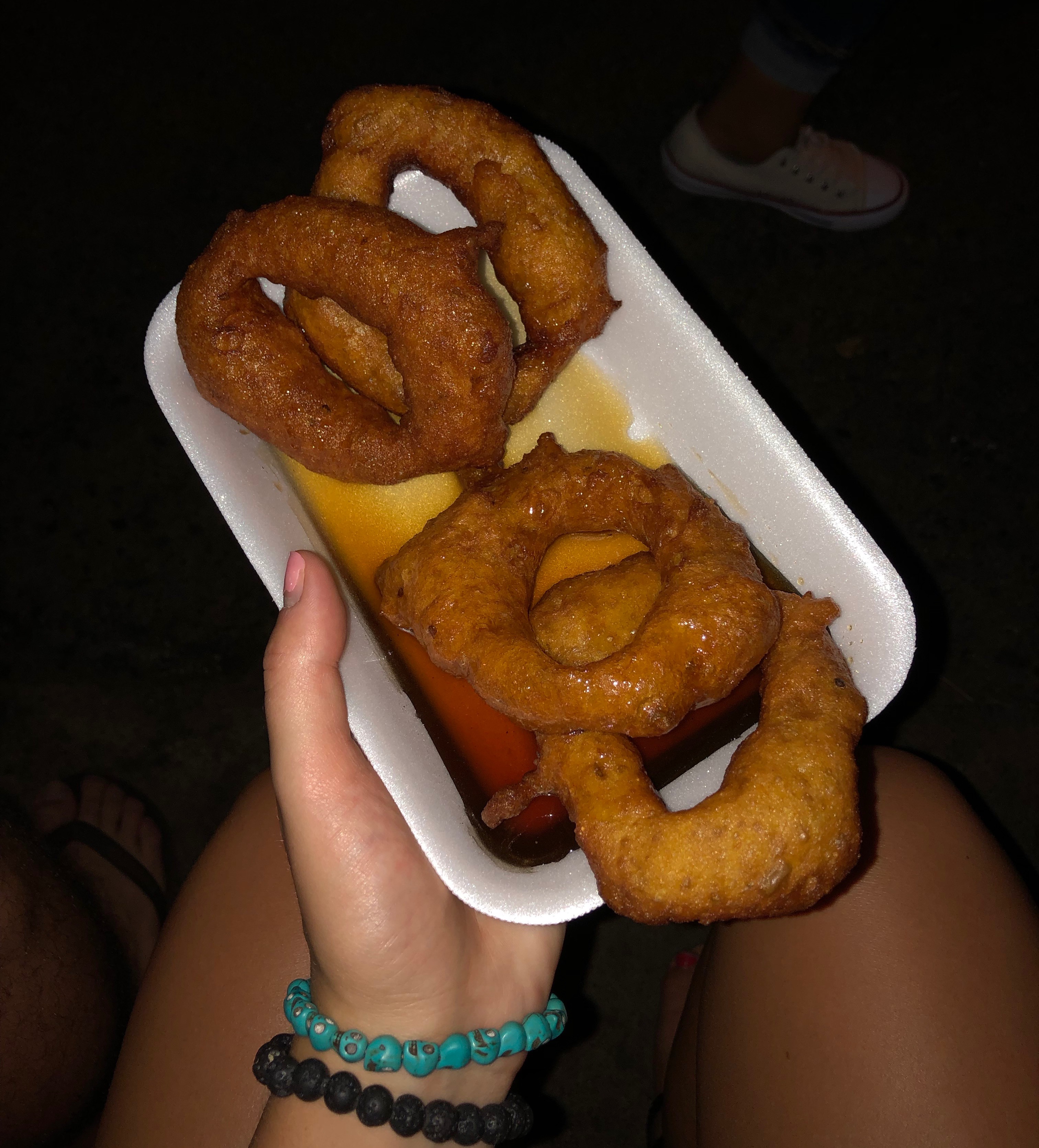 Picarones – a type of fried dough in a syrup.

I’ll admit, I struggled a bit with these, but they are undeniably delicious. Anticuchos are a typical dish of Peru, they are grilled hearts of beef or sometimes Alpaca. Served with spicy sauces and potato, they are a popular late-night food, with tons of stands on the side of the road grilling them up. We went to La Tia Grimanesa, a famous restaurant that started as a street food stand. They are grilled to tender perfection, full of flavor and a great snack or even as a meal. 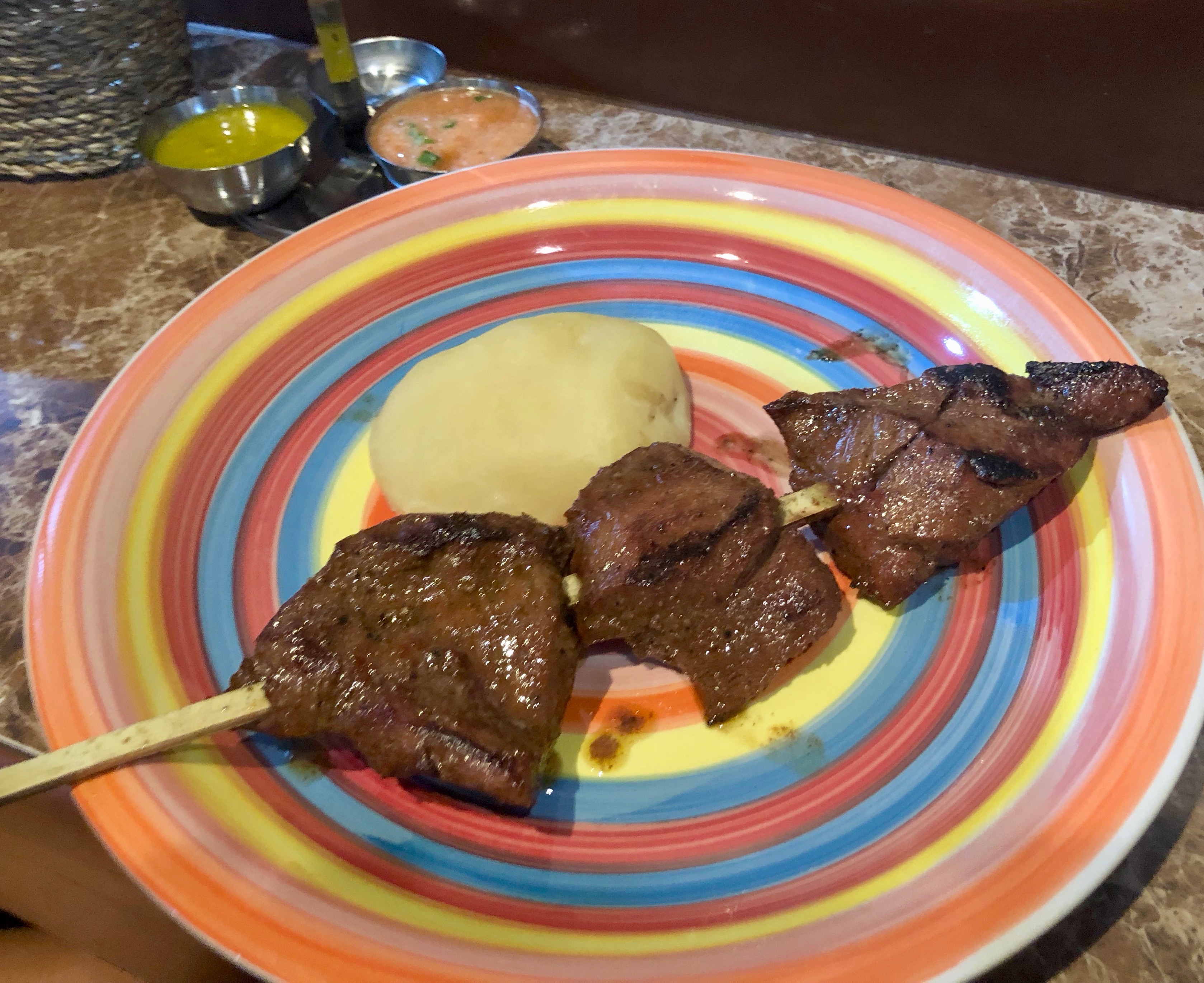 Mercado 28 is the hipster watering hole of Lima. With a big bar in the middle and a variety of food stalls scattered around the perimeter, there’s a variety of foods to try, ranging from dumplings to pizza.

In addition to beers, Chilcano’s, and tinto de verano, I had a fried chicken burger from Street Chicken that was amazing. AND, I got to meet up with my coworker, Joe here! He’s the first person I’ve met in real life from my work and is traveling around doing Remote Year. 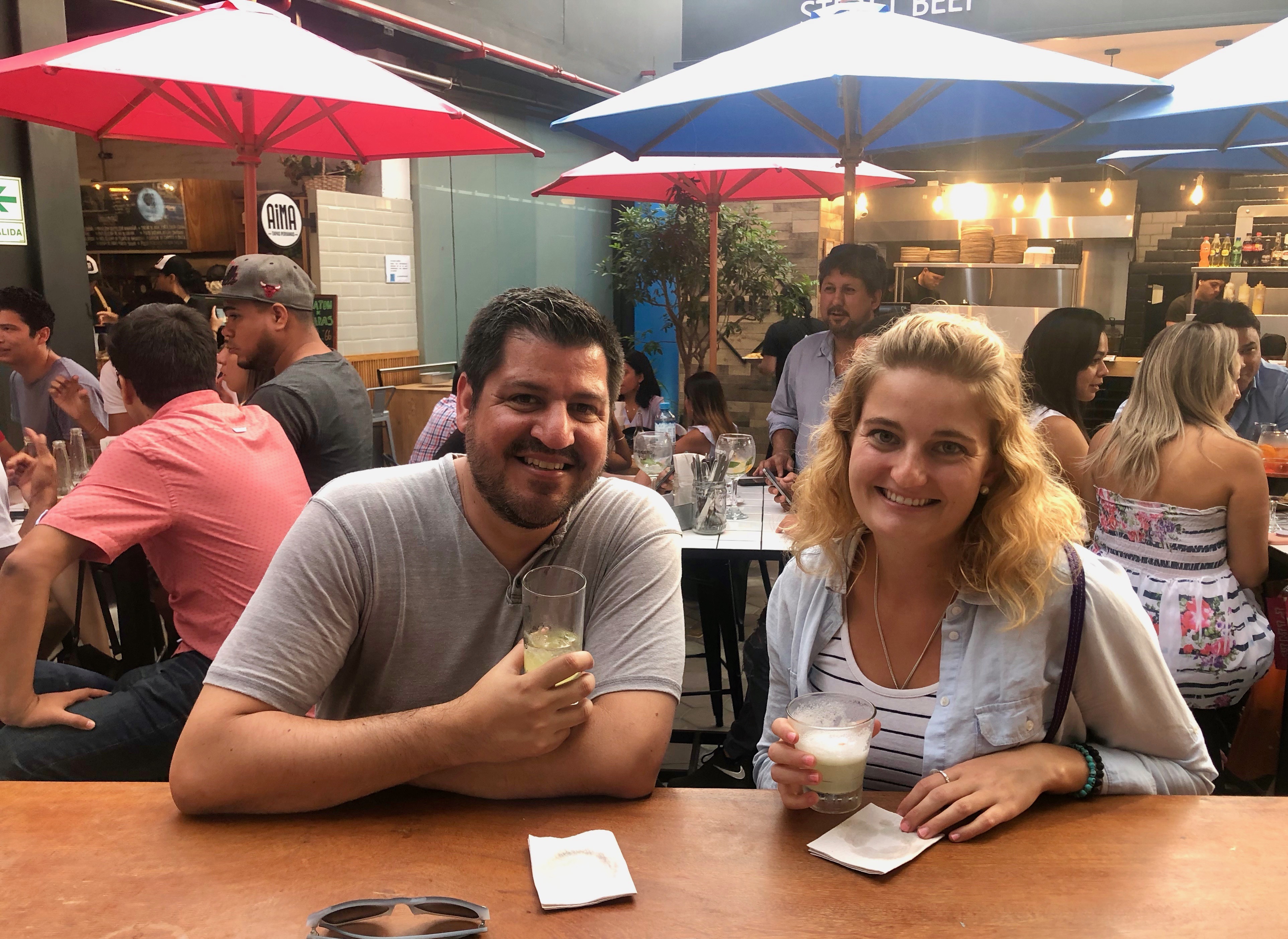 A top thing to try while in the capital city of Peru? Rent a surfboard in Lima!

I guess I completely forgot to take pictures of our surfing day, but we did rent surfboards and paddle out for a few hours right in Miraflores on the beach. There are a bunch of surf stands and shops you can rent boards and wetsuits from for a few hours, or take lessons if you want to learn. The wave breaks were great – the water just isn’t very clean. I felt a bit gross after and was happy to shower off the salt water and (probably) pollution. I’d definitely recommend going surfing if you’re looking for physical activity in Lima. 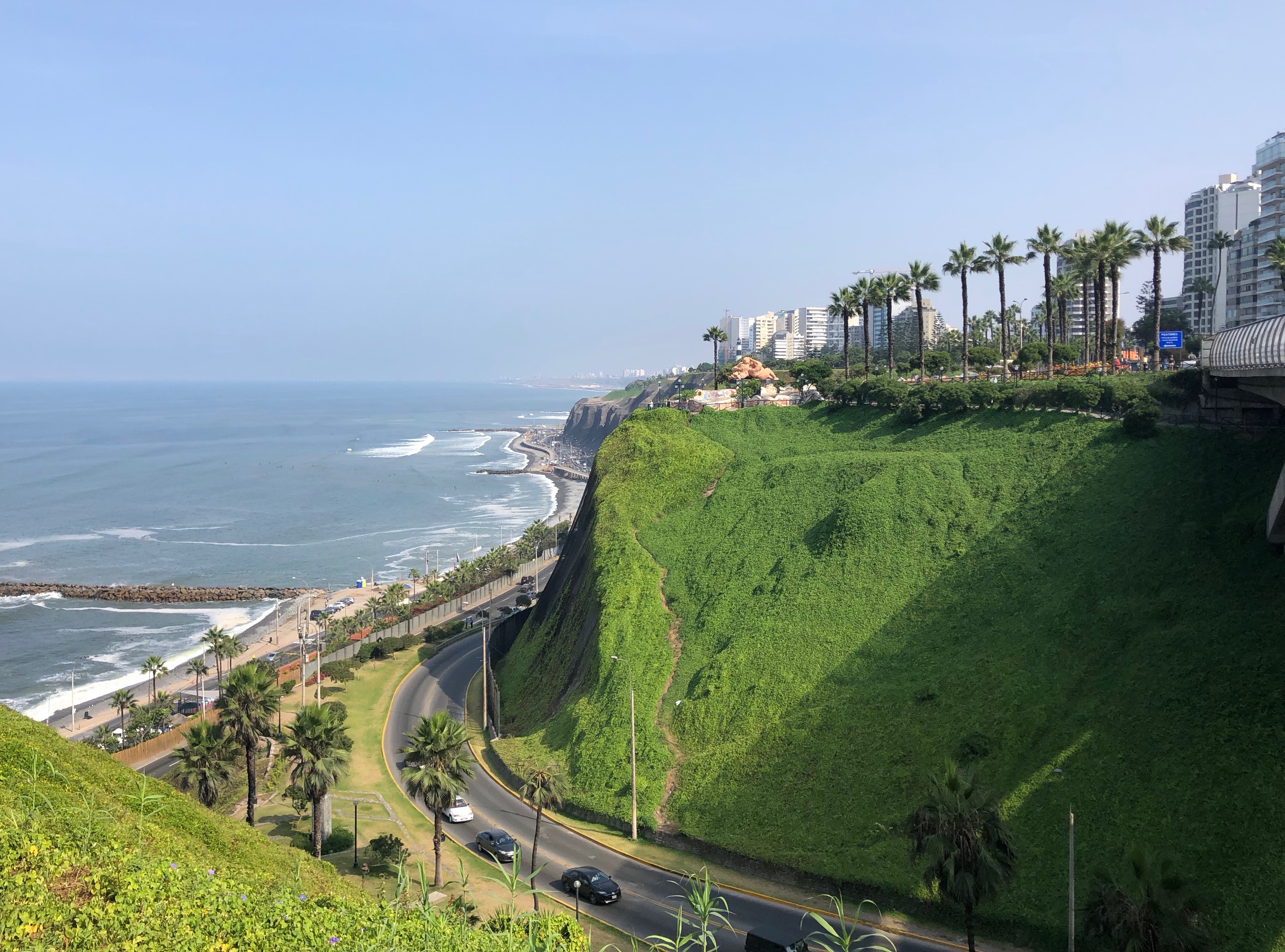 One of my goals for the coming years is to take some lessons and maybe even go to a surf camp, it’s a fun activity and it seems like you can enjoy it well into your later adult years. It’s never too late to learn a new skill, and what’s better than some exercise and swimming in the ocean? Plus, if you get good at it, everyone will think you’re super cool.

On the west coast of anywhere, sunsets are always great. I loved walking along the coast in Miraflores during the sunset, watching paragliders descend to land. There are also crepe stands and other cafes scattered along the coast, perfect for enjoying an evening snack while watching the sunset. 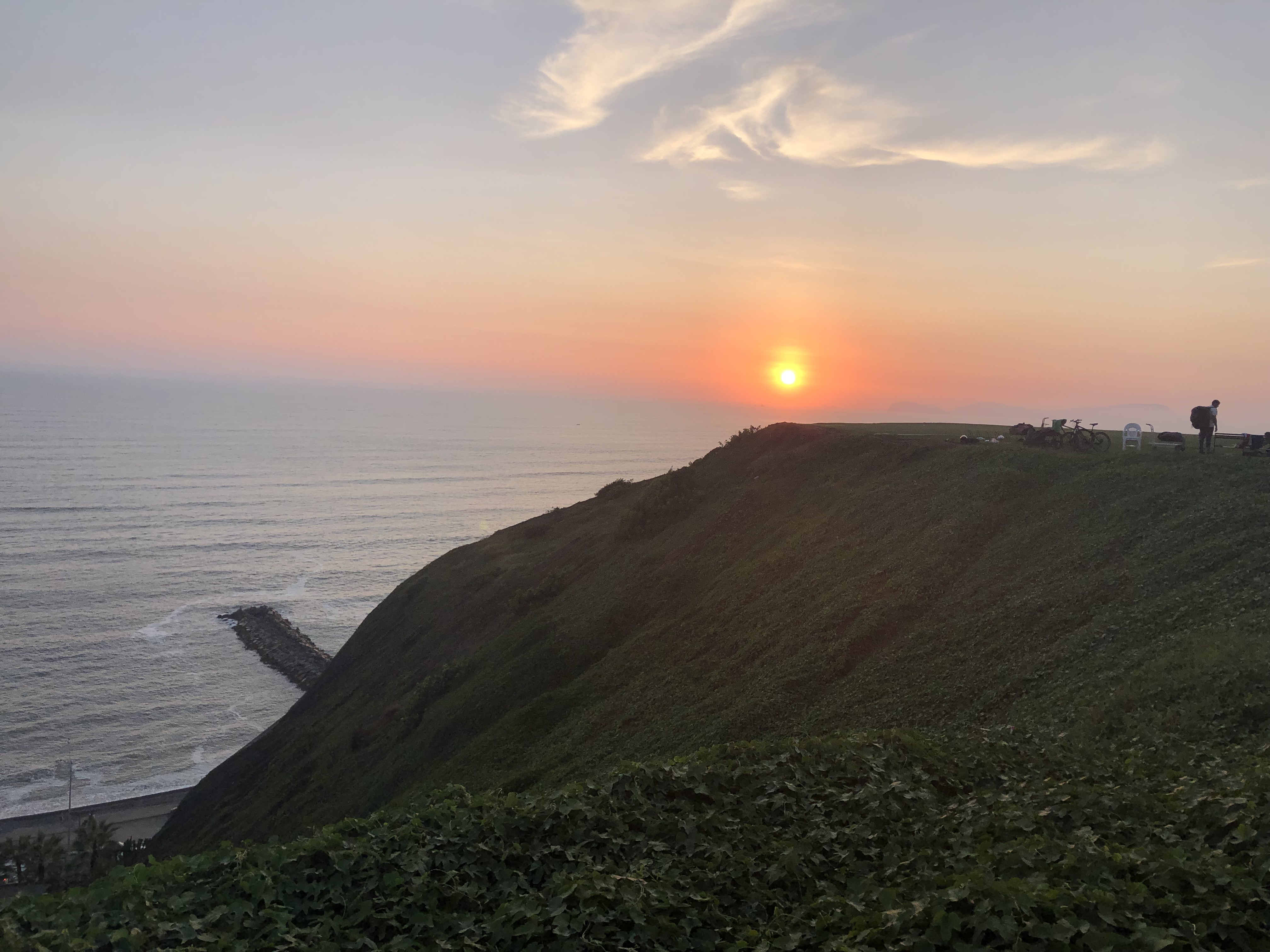 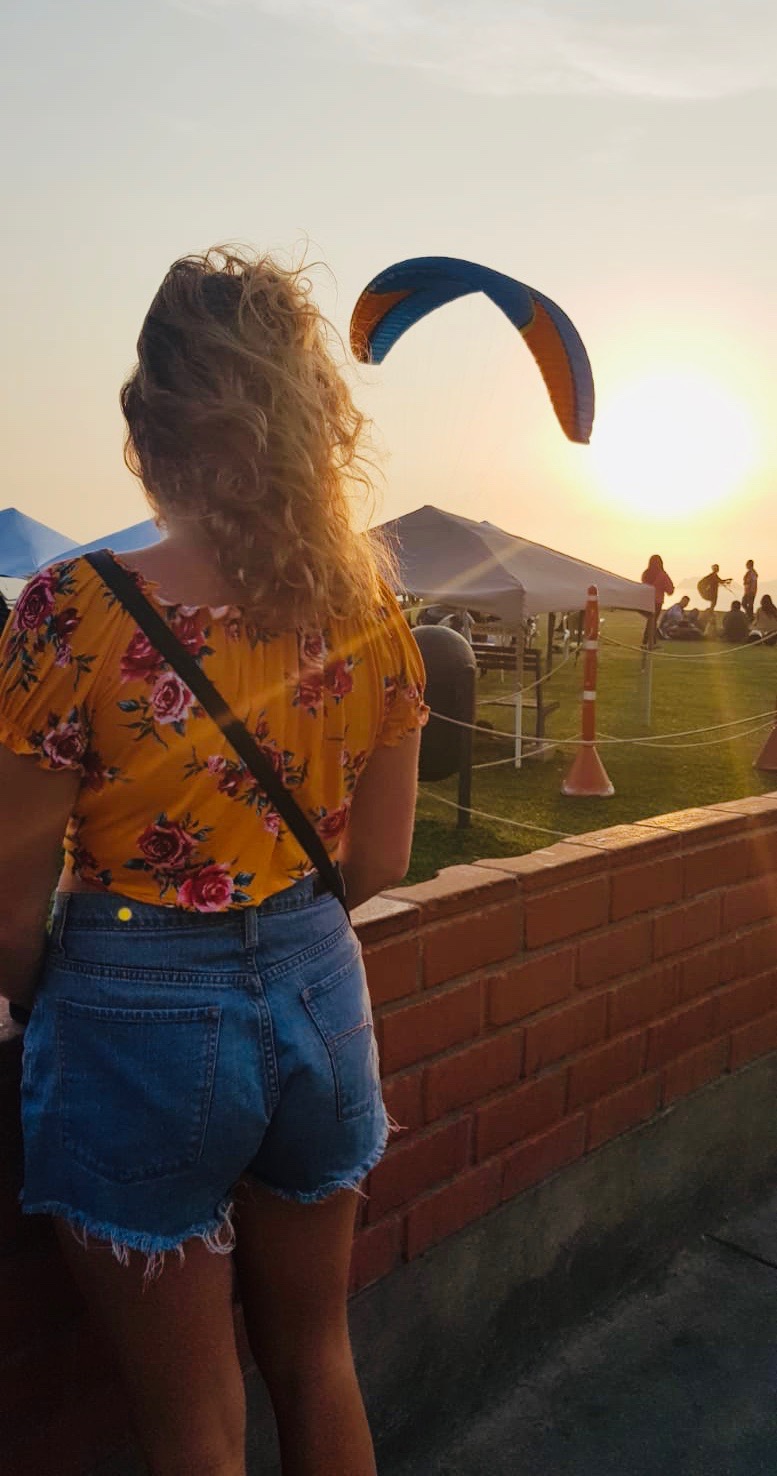 I loved this restaurant in Miraflores. Ceviche is a popular dish of Lima, it’s raw fish marinated in lime juice and other seasonings. It’s not something I’d want to eat a lot of, but this place was serving up the perfect amount. The rice and seafood dish was also good, as were the Pisco Sours, the iconic drink of Peru. The service was excellent, they brought us free sample tastes of ceviche before we ordered, as well as tastes of chicha morada, a Peruvian drink made from purple corn. 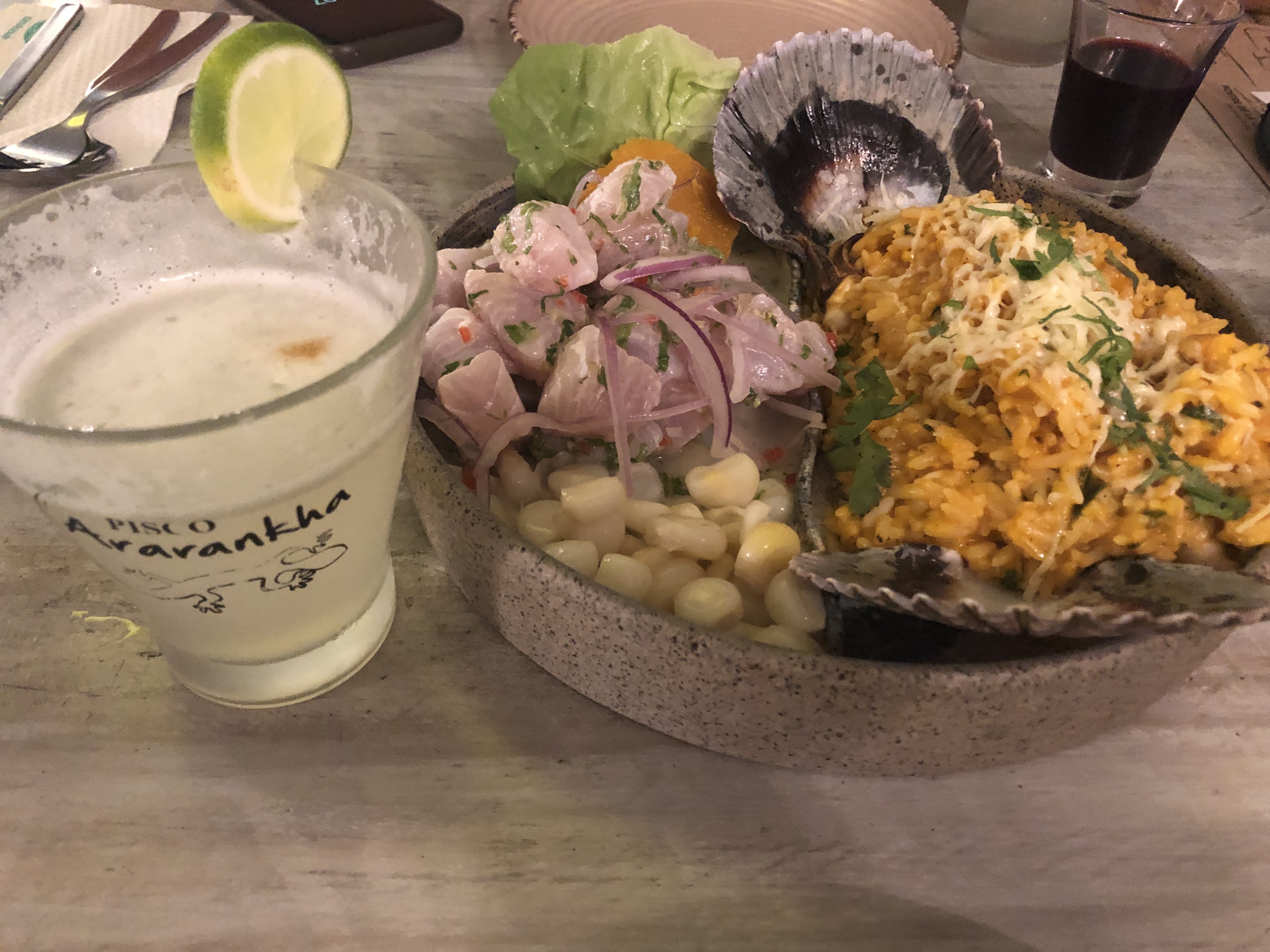 This area was… intense. There’s a cluster of the historic buildings, good for some photos, but it felt a bit sketchy. After checking out the architecture, we made our way to Chinatown. Here, we ate literally a feast of Chinese food for pennies. If you’re on a budget and craving some Asian food, definitely head to Chinatown in Lima. It was intense though, very crowded with tons of people milling about, so I’d recommend having a restaurant in mind before wandering into this zone. 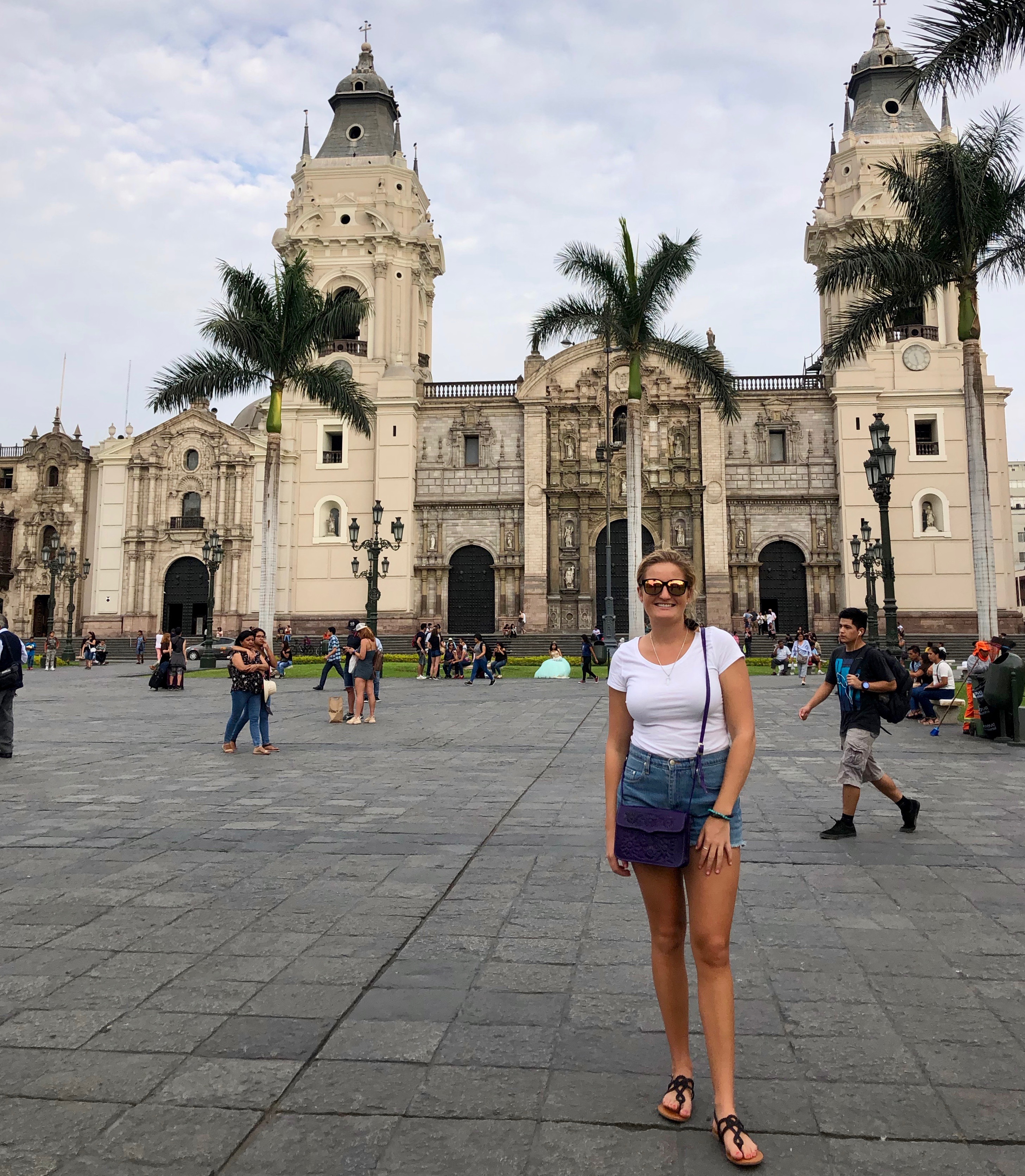 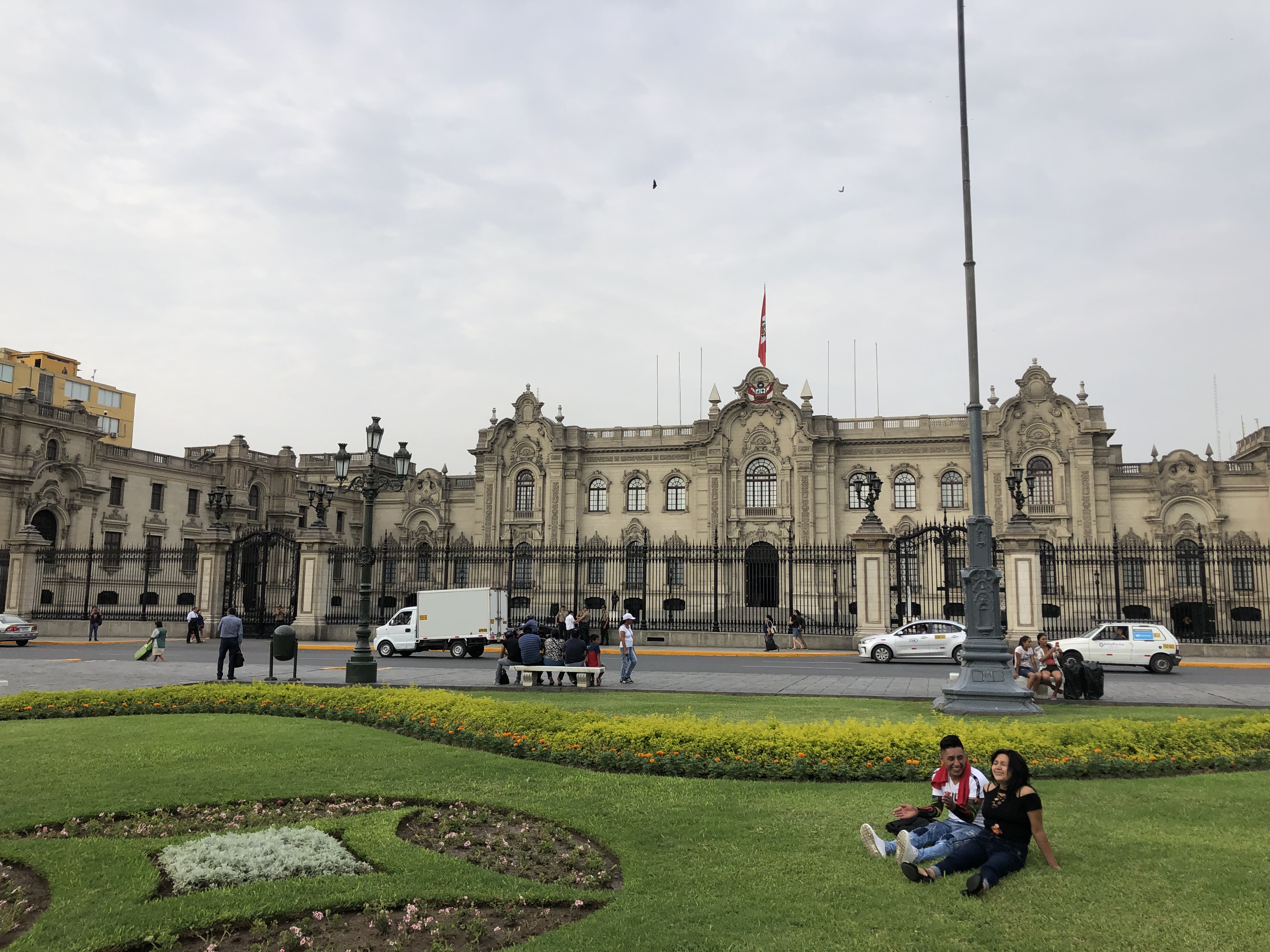 Overall, I have to admit, Lima is not my favorite city I’ve ever visited. It’s expensive in comparison to the rest of Peru, there’s a lot of heavy traffic so getting anywhere takes a lot of time, and I didn’t find it particularly interesting. That being said, I didn’t spend a lot of time and money going to museums or all the tourist attractions.

If you’re visiting for a few days, you’ll have more than enough time to see everything worth seeing. It was still a cool place to visit and spend several weeks and should be on your list if you’re making your way around Peru. Definitely check out the food scene and indulge in some great restaurants, because that IS what Lima is known for, and was probably the best part of my time here. 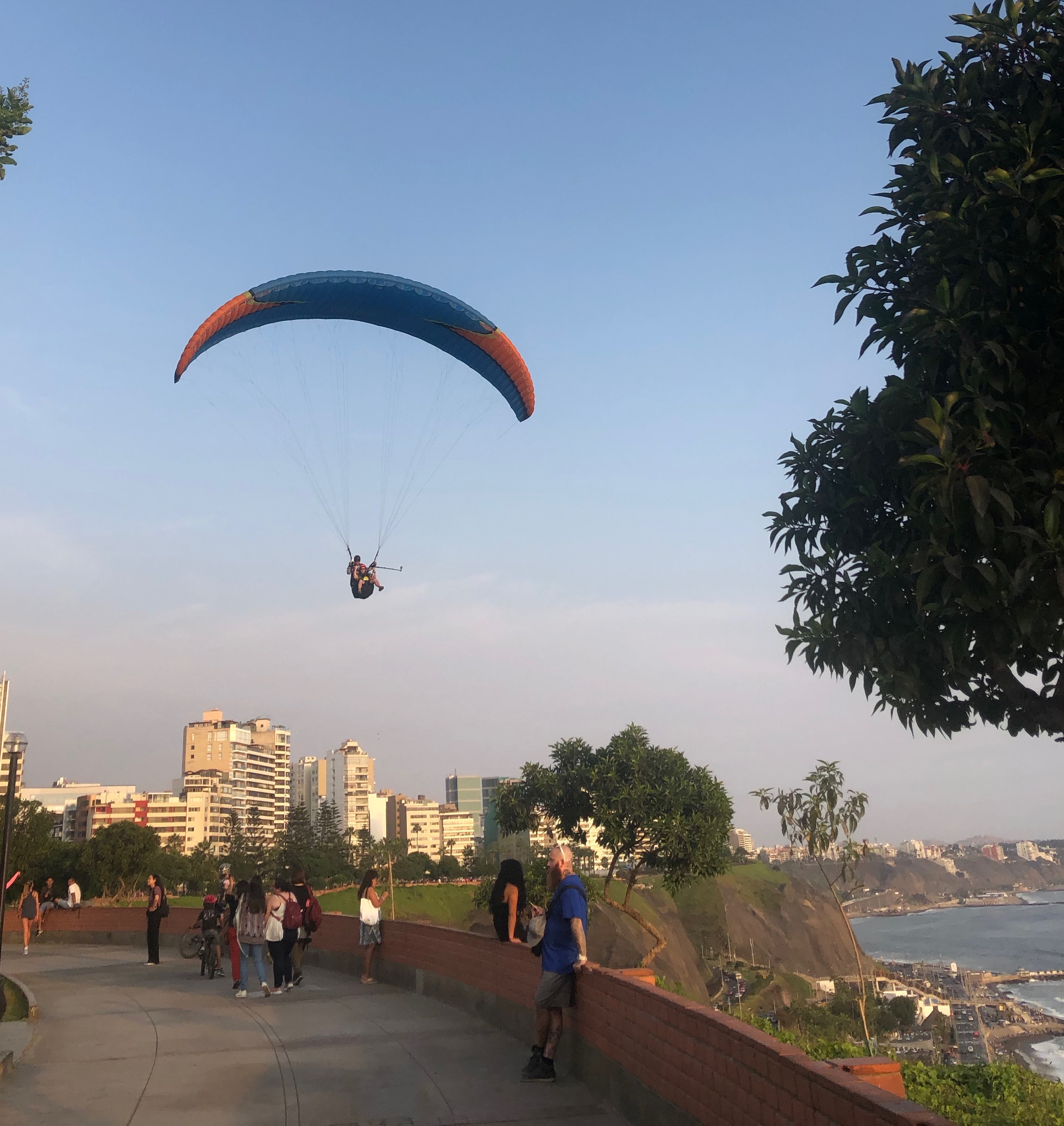