For a long weekend at the end of October, I swooped a flight to Copenhagen! Because I had not yet met my new coworkers and I was planning farther ahead than anyone else wanted to, it soon turned into a solo journey to Denmark. I hadn’t traveled alone since my summer 2014 adventures, but because Denmark is considered to be one of the happiest countries in the world, I figured that I would survive three days by myself. There was an incredibly special feeling that washed over me when I stepped foot into Denmark. It was an entirely new place that felt just like home. 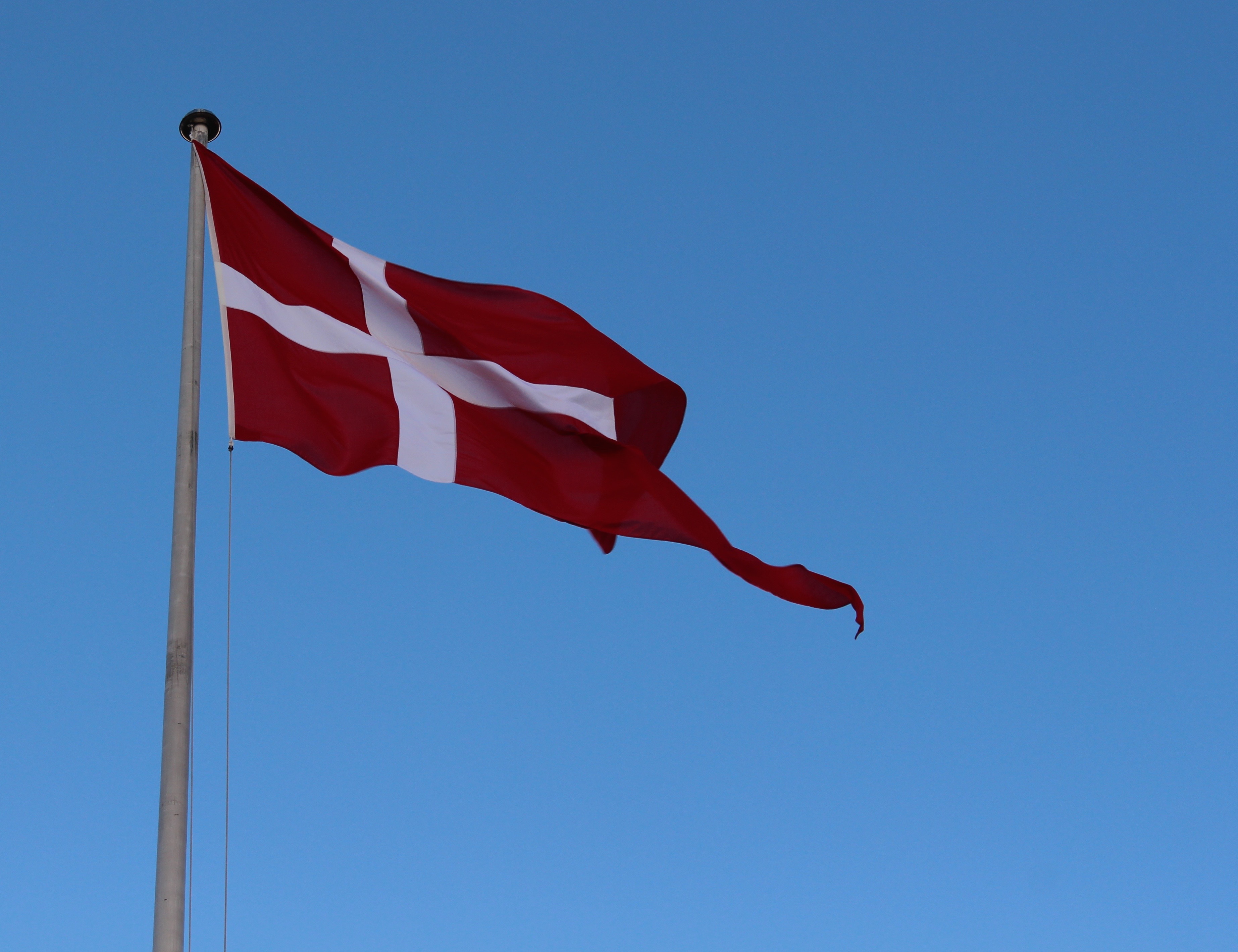 Flights to Copenhagen from other major cities in Europe are relatively cheap, I think my total cost was 60 euro return. Once at the airport, getting to the city center is an absolute breeze. Follow the signs for the metro/train/bus, buy a ticket at the kiosk (they are all the same price, the metro is the quickest and most painless in my opinion) and jump on. My hostel was closer to Nørreport station, so I took the M2 there. It was incredibly simple, reliable and quick.

I stayed at Generator Hostel Copenhagen which was excellent in terms of amenities and location. It is reasonably priced considering it is more of a hotel than a hostel. My complaint about it is how corporate it feels. There is no kitchen or communal space for food preparation, in fact, you cannot bring in your own food. This lost a lot of points in my book especially because Copenhagen is an incredibly expensive city!

I rented a bike from my hostel for 24 hours to explore the city faster, but one could easily see all the major sites on foot over the course of 2 days, especially if you are staying right in the center. It is a very bike friendly city, and it was fun to zip around on two wheels for a day.

One of the first sites I crossed off my list was the Rosenborg Castle and the Botanical Gardens. The Castle is located in a beautiful park, right near the grounds and greenhouses of the gardens, which are free to enter. Walking into the palm room was like going from a cold day to the tropics, and it was interesting for a biologist like myself to have a gander at the plant biology & botany facilities of the University of Copenhagen.

In the borough of Christianhavn of Copenhagen is Christiania, a self-proclaimed autonomous community of about 800-1000 residents, occupying what was once Danish military barracks. It is a big draw for young travelers, as there is a strong cannabis culture within the community, and the overall atmosphere is very free-spirited and hippie. I biked around the different communities, and while I found it interesting, I wouldn’t say it was my favorite part of Copenhagen. It is a bit dodgy, as there is a lot of conflict with police raids, so in certain areas, DO NOT use your camera. The people dealing hash have been known to get very aggressive toward naive tourists who are snapping photos. Thus, I only took this photo while exploring the different areas of the neighborhood

On my first day of exploring, I decided I would walk to the famous Little Mermaid statue to cross it off the list. In that same general direction is the Amalienborg Palace and Kastellet. Kastellet is one of the best preserved star fortresses in Europe, and it is a really cool thing to walk around in for a bit. Bonus: There was a woman with a crepe stand in the middle of it and the nutella crepe she made me was INCREDIBLE. I still dream about it.

The statue wasn’t exactly a let-down; I had been pre-warned about how dinky it was in real life, so that didn’t come as a surprise. It was just a strange thing to be so famous, and there wasn’t any information posted around it that would give someone a clue as to why it is so famous. I definitely found it hilarious to stand back and watch a sharp-elbowed Japanese tour group kick a bunch of rowdy drunk Russian tourists out of their way to get the best selfies. It was quite the experience, like I could feel that everyone was thinking the same thing:

“That’s IT? Well, I guess I’ll try to get a decent selfie and then get out of here, it’s cold.”

Nevertheless, it was a cool thing to see and the waterfront of Copenhagen was really beautiful. 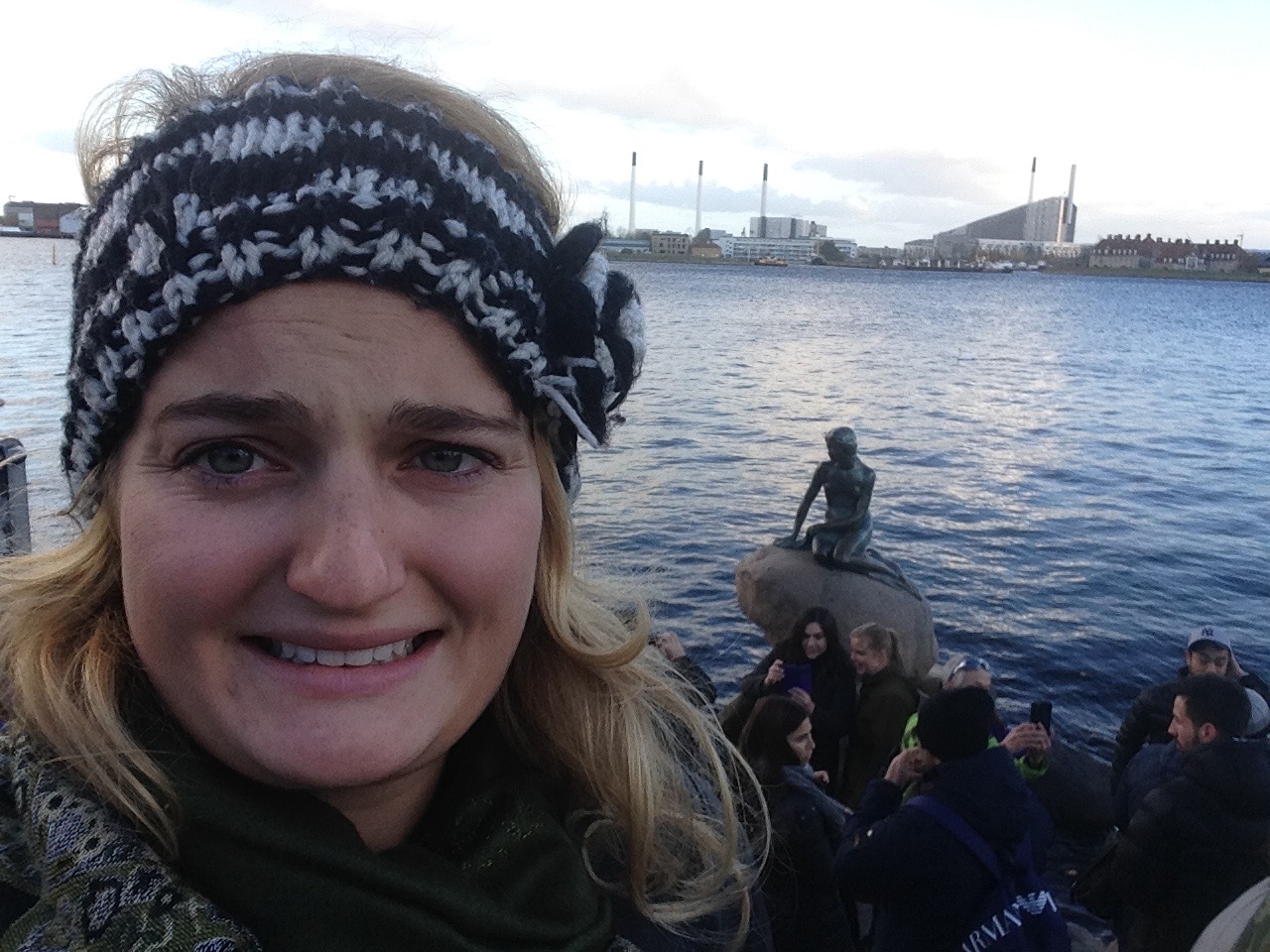 Originally constructed in the late 1600’s, this picturesque waterfront canal is one of the tourist hotspots of Copenhagen. Nice restaurants line the long stretch of canal, boat tours leave constantly from this port and it is full of old wooden ships. Definitely a must-see in Copenhagen, Hans Christian Andersen lived at number 67!

On every online travel guide to Copenhagen, the Tivoli Gardens are listed as “must-see/do” thing, generally #1 or #2 on the list. I was a bit hesitant, not only because I’ve been to plenty of theme parks in my life and it sounded obnoxiously touristy, but it also seemed a bit sad and weird to go to an amusement park by myself. I asked my waitress at brunch about it, and she said that she had worked at Tivoli for 2 years, and that autumn was her favorite time because of the decorations. So, I decided I’d give it a go.

I even rode the world’s second oldest roller coaster, a wooden coaster built in 1914.

Cost to get into Tivoli Gardens: About 15 euro

Cost per ride: About 6 euro (can be much cheaper with an unlimited ride pass purchase)

Food: I spent 20 euro at wagamama in the park, there are tons of restaurants to choose from within the grounds.

It’s expensive, but I would say it’s worth it. If I wouldn’t have gone, I would be kicking myself wishing that I had.

A cool FREE thing to do in an otherwise expensive city is jump in the lift to the top of the Christianborg Palace for a beautiful 360 view of all of Copenhagen. The line took awhile, but there was free wi-fi so I could be on my phone to pass the time. 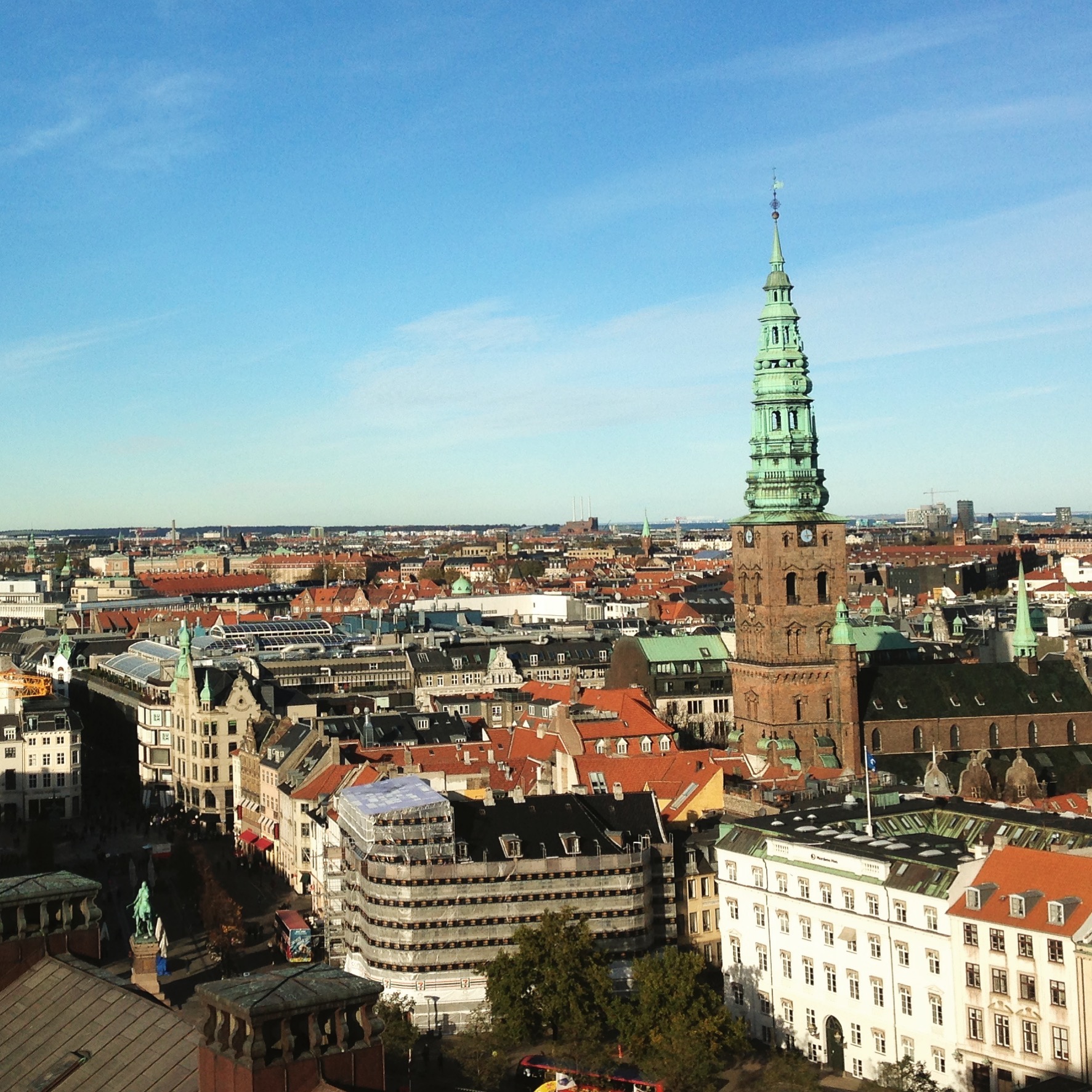 Right off of Nyhavn, this restaurant had an AMAZING brunch that I ate on my first day. Eggs Benedict with spinach florentine, garnished with pomegranate seeds. Service was also great and the place was packed – for a reason! 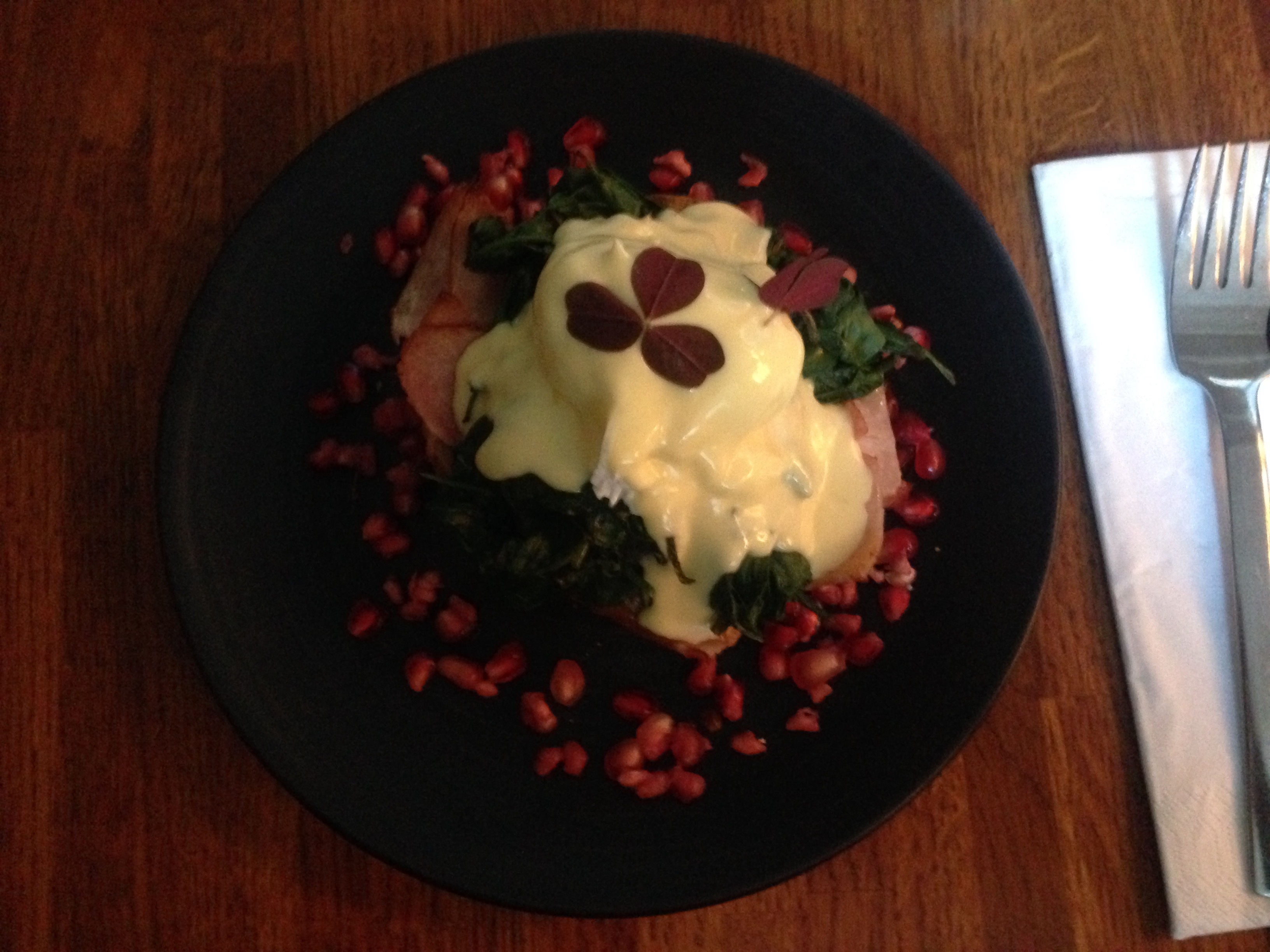 A huge indoor and outdoor space right on the water, Copenhagen Street Food is a great food market with cuisine from around the world.

A chain in Copenhagen and a great place to grab breakfast. Made me miss Bruegger’s Bagels a bit less, fulfilled my cravings for a hearty bagel sandwich to start the day. 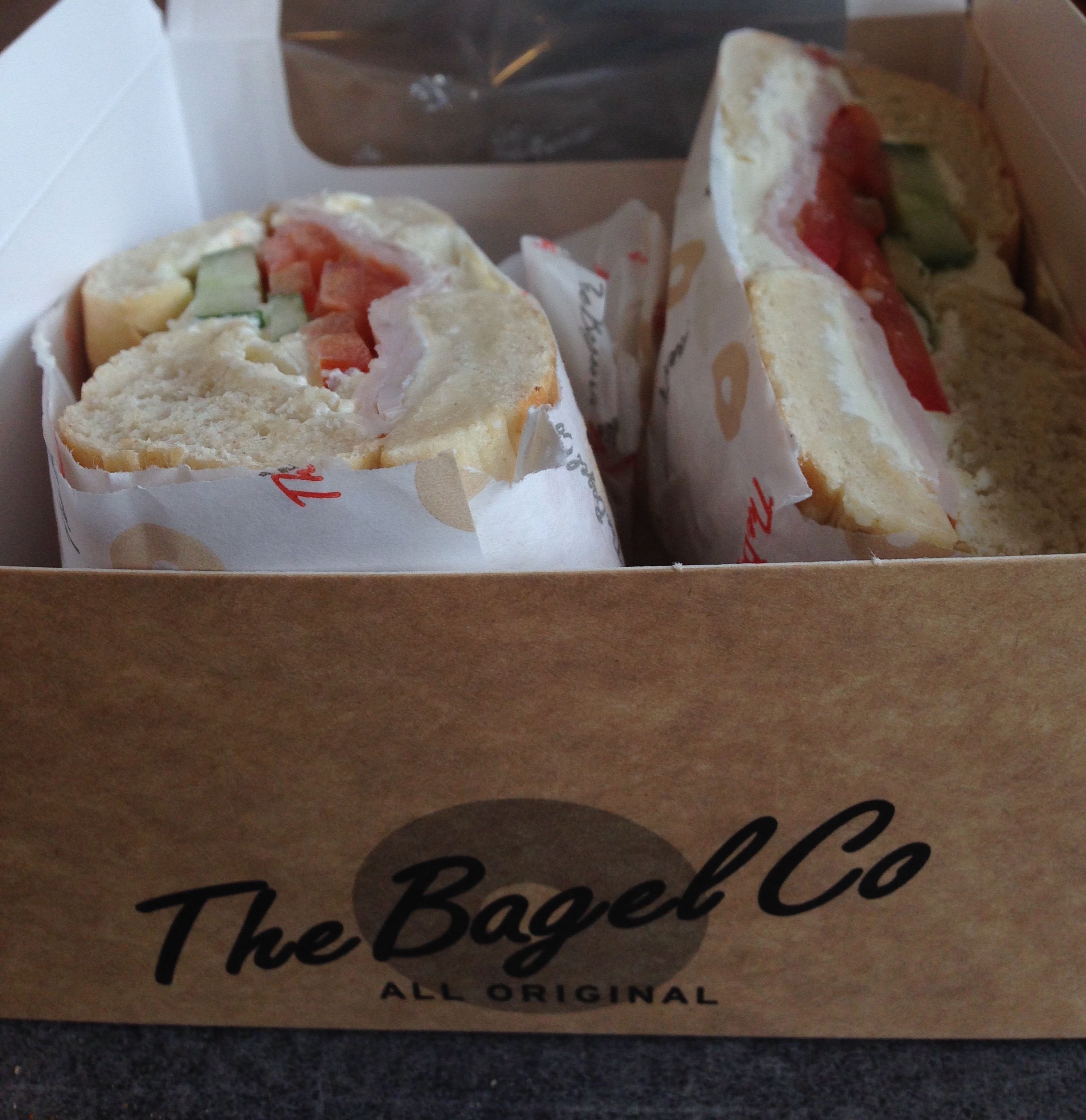 A fully loaded Copenhagen classic! This hot dog is smothered in onions, different sauces and pickles and it’s cheap and delicious. Definitely recommend giving it a try, all the hotdog stands throughout the city have them.

A Denmark classic, these open-faced sandwiches are awesome! I opted for roast beef with carmelized onions & mushrooms, topped with a fried egg and some pickles. I ate at Hyttefadet Nyhavn, which was a nice and not outrageously expensive restaurant for being right on the canal. 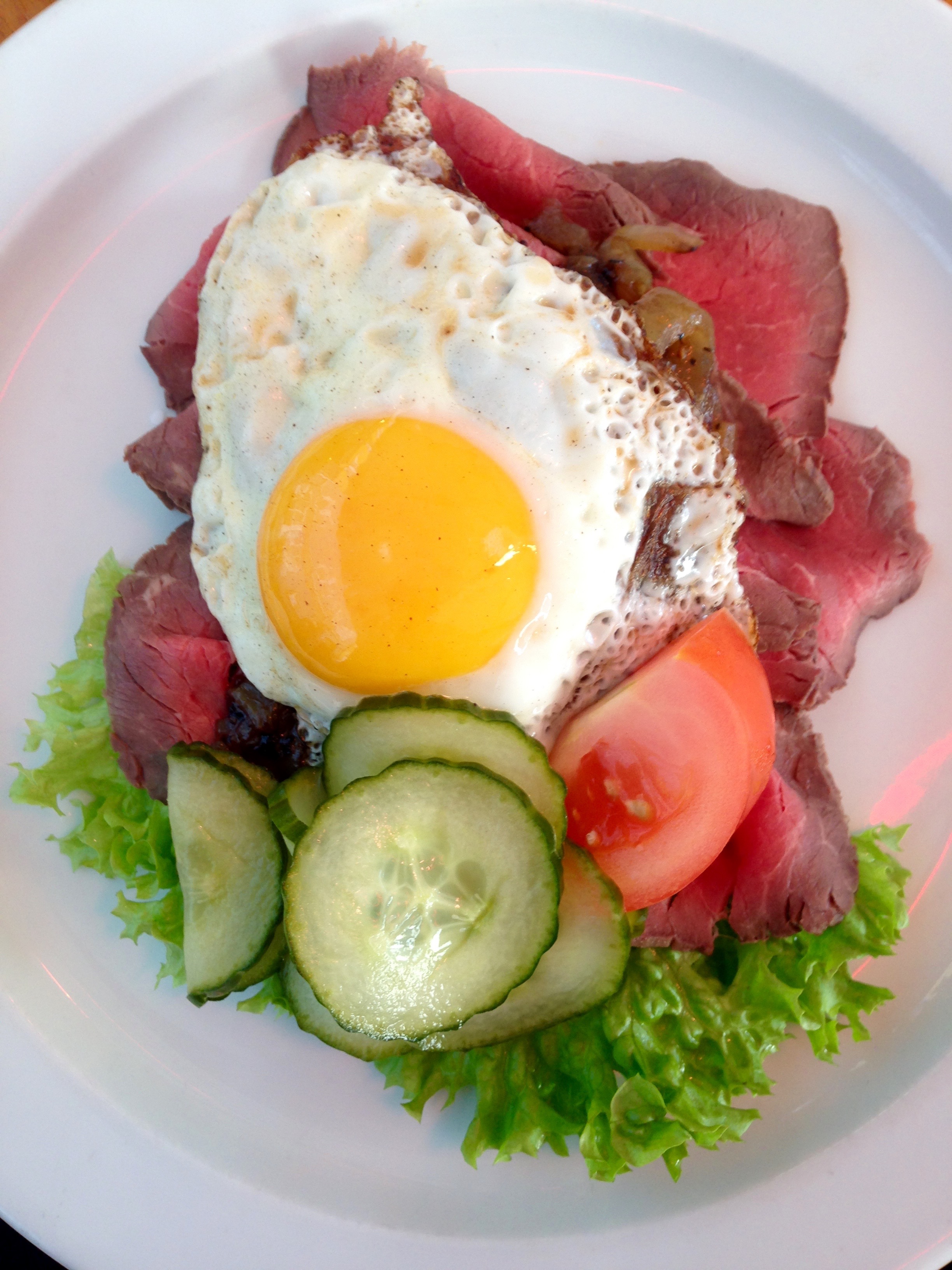 Copenhagen was an incredible city to visit, and in a lot of ways, I felt very at home there, which is interesting as there are a lot of Danish immigrants in Minnesota. It felt like true autumn, very different from the autumn of Madrid. It is very safe and easy to get around, which is great for solo travelers, however, I wouldn’t call it a top destination for solo travelers. Because a lot of the appealing things to do revolve around going out to eat, it would have been nice to share this experience with friends or a significant other. I still had an amazing time, being alone didn’t detract from my experience at all, it just would be a great place to explore (read – share food and try ALL the things!) with other people too.

This article is now available as a mobile app. Go to <a href=”http://www.gpsmycity.com/tours/the-(very)-little-mermaid–copenhagen–denmark-2459.html”>GPSmyCity</a> to download the app for GPS-assisted travel directions to the attractions featured in this article.