After 16 hours strapped in a plane seat, I landed at the Hong Kong International Airport. The scene was normal enough; besides the looming energy of tension in the air, I couldn’t see any signs of chaos nor revolution.

I took the double-decker airport bus to Tsim Sha Tsui on the Kowloon side. Thus began the puzzle of finding my accommodation within the concrete jungle of apartment blocks. Wandering a bit, squinting at the neon signs, a middle-aged Hongkonger (yes, that is the term) man could tell I was struggling and asked if he could help. He helped me decode the maze of building complexes since the blue dot on my GPS did nothing but bounce around frantically in a 1-block radius.

“You know what’s going on here, right? You need to be careful while you’re in Hong Kong,” he said, in a concerned, but irked tone. Normally this would cause me to have a defensive reaction, but I let go of my ego and let him impart his wisdom.

“Ok good. Be careful,” he turned and disappeared into the darkness of Nathan Road.

I rode the lift to the 5th floor and checked in with a young woman. She kindly took the time to explain to me where to go, and places to avoid, in the city.

“Stay away from the universities,” she said firmly. “And, Mong Kok.”  The bustling neighborhood of Mong Kok was the site of the siege between police and protesters the night I arrived.

I showered off the layer of grit that had accumulated on my body from sitting for so long between Dallas and Hong Kong. Forcing myself out of the hostel, I walked to Hau Fook Street, a cozy corner of authentic dim sum and Cantonese restaurants. It all seemed normal  – no fights in the streets, no groups dressed in black, no face masks, as I had seen broadcast on the news and circulating on Twitter.

After a Tsingtao and stir-fried beef dish, it was finally time for bed.

I awoke at 4 am, hearing shouting in Cantonese coming from the streets below. Peeking out of my 5th-story hotel room, I could see a group of young men, clad in black shirts and face masks, arguing with another man. One of the young men jumped on the hood of a taxi that was trying to maneuver around the altercation. Thankfully, nothing happened beyond that, the man rolled off the hood and the taxi drove off. Normally, I wouldn’t be surprised to see a scene like this in a popular tourist destination — groups of bachelor parties and rowdy young males do these stunts all the time. But it didn’t take knowing a single word of Cantonese to know that this was different.

I rolled over and fell back asleep until 6 am, and decided it was time to get up and go sightseeing. The city in the early morning will be quiet. Just people opening up shop and going to work, I told myself as I got ready.

The second I stepped out of the building and onto Mody Street, I found myself next to a mob of about 10 young men in a scuffle, yelling and throwing punches.

My heart rate spiked as I quickly walked to the side, away from the fight. Turning back, I could see a man with a giant stick running at the group. It seemed it was reaching a turning point. I kept walking away briskly, vowing to seek refuge in the first open dim sum establishment I came across. As soon as I made it a block from the skirmish, I instantly felt calmer. A little old woman walked past me with her pug in a stroller, and there’s nothing more wholesome and reassuring than that.

I ate dumplings and a rice dish with coffee before making my way to the Avenue of Stars and the Star Ferry. The city was quiet, with a few people starting their day. Some were jogging along the waterfront, others sitting and reading the paper on park benches. The crowd of commuters taking the ferry to Hong Kong island was weary. Above the roar of the engine of the boat, the silence of the people was palpable.

Once on Hong Kong Island, I began my journey to Victoria Peak. The iconic climb had evaded me the last time I was in Hong Kong, as rain and zero visibility made it not worth the effort. Now, there was a steady stream of red taxis zipping past me, but I was stubborn and determined to climb the whole way on foot.

After a long climb, I reached the start of the path for the peak hike. I felt overwhelmed by the eerie feeling that came with being alone in a place that is typically overrun with tourists. At the start of the Victoria Peak hike, you see the switchover in the scenery as the concrete stops and the sprawl of trees begins. The noises change from squeaky brakes and honking horns to the twittering of birds and rustling of trees. I reached the top, where only a few people could be seen milling around, taking photos of the sea of skyscrapers that lay below. I had to actually wait at a viewing point for about 10 minutes before a poor sap came along who I could ask to take my photo. The most iconic spot in all Hong Kong was silent, with no lines nor wait times, a front-row seat with no one beside me to take in the view.

The Aftermath of the Monday Mong Kok Siege

I knew I didn’t want to get too close to any of the drama. I’m not a journalist looking to shoot a raw photograph of a tear gas victim, or the intimidating imagery of a line of police officers in riot gear. It was impossible to avoid, I discovered, as I weaved my way down Nathan Road, heading to a few tourist destinations that were on my list. The closer I got to Mong Kok, the more I could feel the tension rise in the air. Shop windows of big brand stores were completely shattered, the tempered glass in piles on the sidewalks. Bricks torn up, used as projectiles, now laying scattered across the streets. Empty tear gas canisters, makeshift Molotov cocktails, and the iconic black surgical masks worn by the protesters to conceal their identity were discarded on the ground. 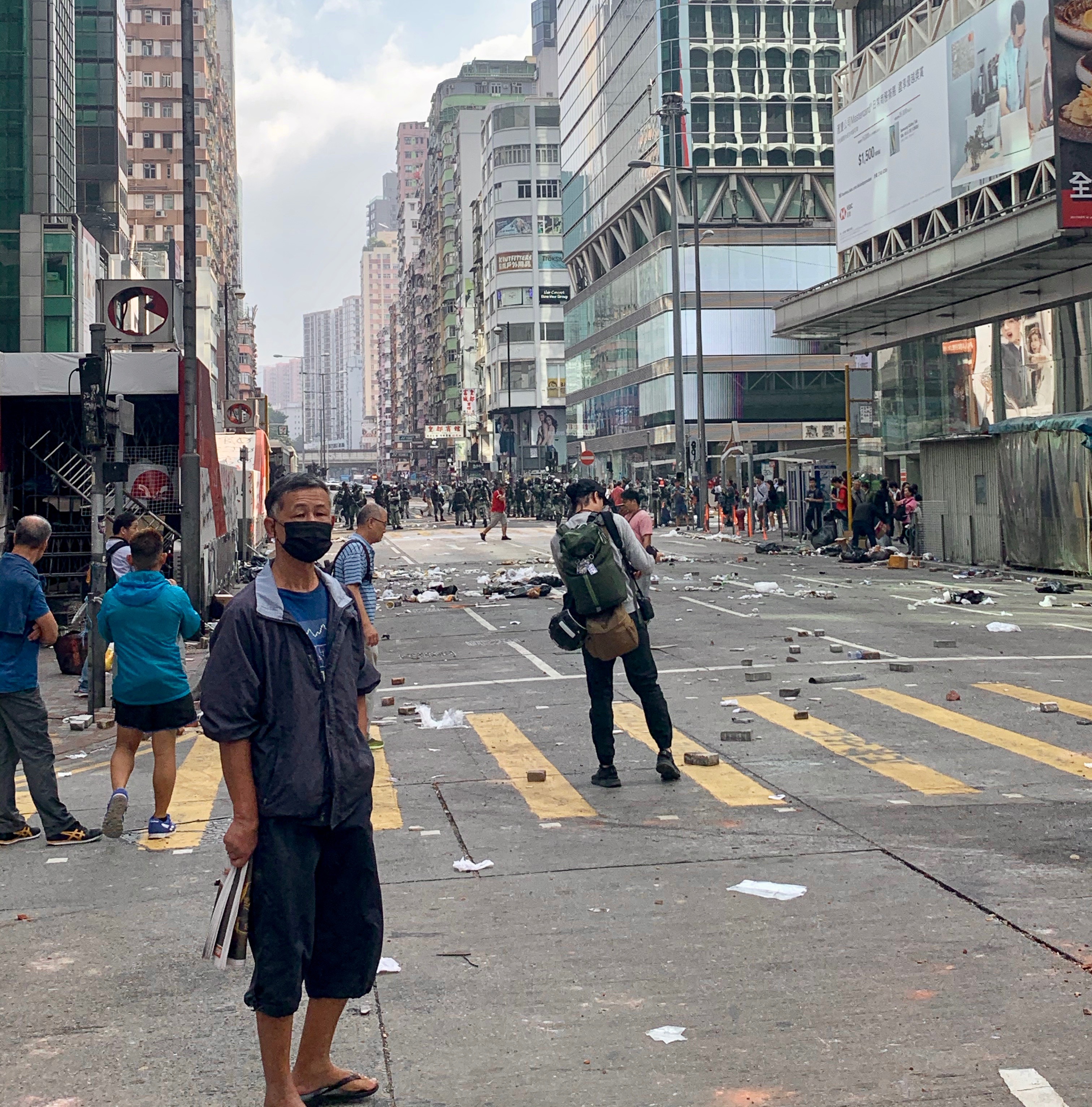 Onlookers stood a block away from the police barricades, a massive wall of officers in riot gear and police trucks with the lights flashing. I carried on and checked out the markets and made my way to the Choi Hung Estate, a rainbow-colored apartment block. It has become a tourist destination, thanks to the almighty Instagram. Expecting to wait my turn to snap a picture, I was surprised to find two resident kids playing basketball, and one man taking a few pictures. It was a ghost town of only locals, no tourists.

An Attack on the Subway

While some may think it’s foolhardy to venture to a place in a crisis, especially where you don’t speak the language, I was still able to perceive threats and react accordingly. It’s amazing what you learn by watching those around you. On the subway back from Choi Hung, I noticed the gazes of all the passengers around me turn to the next carriage. I couldn’t understand the murmur of conversation that was going on, but I could feel an unease of everyone around me. Suddenly, an older man assaulted a younger man, who must’ve been wearing some sort of clothing to indicate his participation in the protests. The man delivered one angry blow to the subject’s neck, and a short scuffle incurred. I backed away with other passengers, walking to the next carriage over, as both parties were escorted off the train. I was grateful to not see any further escalation.

I went to Twitter to see what was being posted under hashtags #HongKong and #HongKongProtest. My eyes widened in disbelief as I saw a new Twitter post of an escalator at the mall, where I had been just hours earlier, engulfed in flames. Protests had erupted at Hong Kong Central, with protesters throwing rocks at cars and engaging in fights. I felt relieved to be heading back to my room to relax for the rest of the evening, narrowly avoiding being caught in the cross-fire.

What to do if you’ve booked a trip to a place now in turmoil?

So, should you keep your travel plans to visit, even if the destination erupts into chaos after you’ve booked? That can only be answered by you. Every traveler has their varying comfort zones and thresholds for what level of discomfort and shock they can tolerate during a trip abroad. Not every turmoil is equal, either. If your nationality, race, gender, or other factors are going to make you a target, it’s best to stay home. As a blonde-haired, blue-eyed woman, I wasn’t too worried about being mistaken for a Chinese government official.

I remained vigilant throughout all my wanderings in the city. No headphones, no excessive phone use. Eyes up and paying attention to the crowds around me. I made it out of Hong Kong unscathed, the only wounds I sustained were the 3rd-degree burns in my mouth from hastily biting into scalding soup dumplings.

Hong Kong is an incredible city. It’s a pile of concrete and metal that has a beating heart and vibrant soul. It’s hard to say what will come of these protests and the violence that has consumed the city, but I hope it gets resolved soon. My thoughts are with everyone suffering from the violence there now, and especially with the victims and their families.

If you still decide to go, make sure you follow the news closely, heed the advice of the locals, and watch social media for updates. Keep your eyes and ears open, and don’t let your curiosity get you tear-gassed. It’s better to stay away from the danger, even though it’s exciting to witness some of these insane events firsthand. 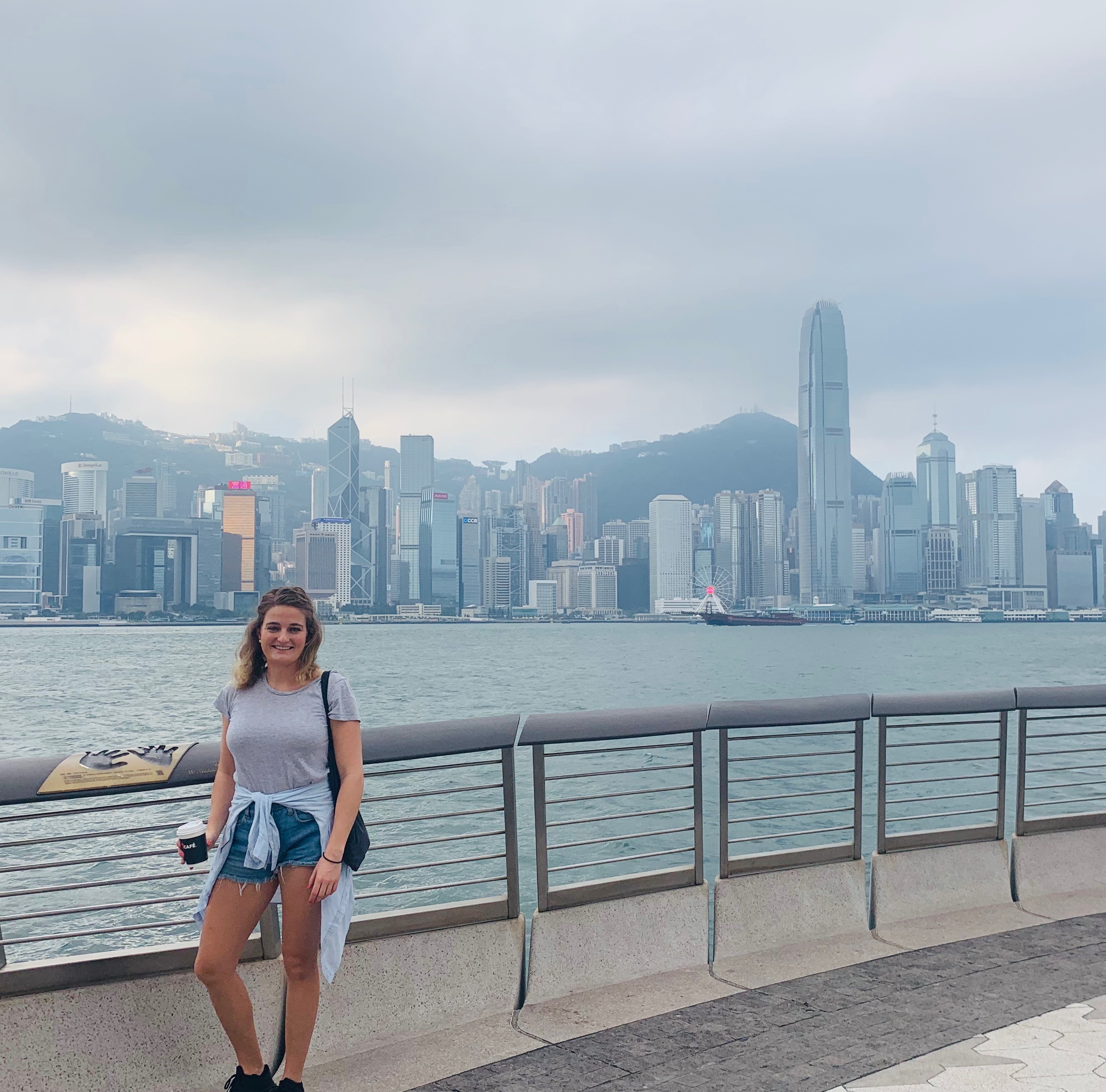